Jeff Cohen at the Hartford Courant continued his coverage of the Perez Administration Corruption scandal in today's edition. Cohen outlined the search warrant served on Verizon Wireless for Perez's cell phone records, an apparent critical piece of evidence to establish probable cause for Extortion, Conspiracy to Commit Extortion and Larceny 1st charges. These allegations appear to be above and beyond the initial charges of bribery and larceny already filed against Perez.

The affidavit was originally on Courant.com

The affidavit in its entirety can be viewed here:


Just when I thought that the Perez Corruption scandal would give me plenty to stay occupied for a while, I received a call about an e-mail that was sent to all employee's in the City of Hartford's IT Department, Metro Hartford Information Services (MHIS). Apparently Eric Jackson, the Chief Information Officer for the City never received the word that the City of Hartford is in a budget crisis, and never saw the stories that we broke about the misuse of City of Hartford credit cards, known as "P" cards or purchasing cards.

Well, recently Jackson hosted two breakfast meetings for his staff, coffee, juice, bagels, muffins, all the trimmings and spared no expense. Relax, no problem, the City is paying for it on its credit card. Only one problem though, the person in purchasing who has now been forced to do their job because of all the scrutiny, rejected Jackson's charge card purchase as apparently not a valid use of the card. I guess there is hope for City Hall, isn't it amazing what a Grand Jury arrest warrant can cause.

So today, Jackson sent an e-mail to all of his staffers through his "Principal Administrative Analyst" Dawn Meucci requesting that they all kick in $10.00 to cover the cost of his mistake.

You can't make this stuff up, is any one capable of showing leadership and managing this city? Mr. Jackson has not returned my call for comment. Maybe Mayor Perez could collect from his staff to pay for those two airline tickets to Ireland.

Here is the e-mail:

Mhis Breakfast
Publish at Scribd or explore others: Other Business & Legal
Posted by KEVIN BROOKMAN at 3:31 PM 4 comments:

NY TIMES CALLS FOR PEREZ TO STEP ASIDE 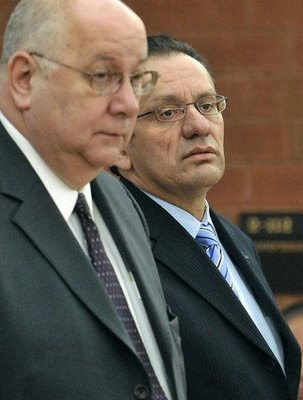 Published: February 2, 2009
Mayor Eddie Perez of Hartford, a Democrat, was arrested on Jan. 27 on bribery and other charges. For the good of the city, Mr. Perez should step aside while his case unfolds. Hartford, Connecticut’s capital, is the poorest city in the state and one of the poorest in the nation. It cannot afford a chief executive who has three years left on a four-year term and who is sure to be deeply distracted by the need to lodge a protracted legal defense.


Mr. Perez says that he has done nothing wrong. He deserves a fair trial. Yet the well-being of his city is also at stake. Hartford is unlikely to attract the private investment or public help it so desperately needs while its chief executive is accused of corruption.

Mr. Perez is the latest in a string of Connecticut officials — among them a governor, a state senator, a state treasurer and several mayors — who have been arrested for corruption in the last decade. Mr. Perez is alleged to have hired a city contractor to do thousands of dollars worth of home renovations in 2005 and not paid him until the authorities started asking questions two years later.

The 25-page arrest affidavit quotes the contractor as saying he never expected payment for work on the mayor’s house, calling it the price of doing business with the city. The allegations, which surfaced in 2007, didn’t prevent Mr. Perez’s re-election to a third term.

The charges are serious, and no matter the outcome, will take months or even years to resolve. In the mean time, Hartford deserves unblemished, undistracted leadership.

One encouraging sign is that state, not federal officials, investigated Mr. Perez and brought the charges against him. For too long, Connecticut has failed to vigorously pursue homegrown corruption, leaving it to federal officials to investigate most serious allegations. More aggressive state enforcement would almost certainly lead to cleaner government.
Posted by KEVIN BROOKMAN at 12:37 PM No comments: 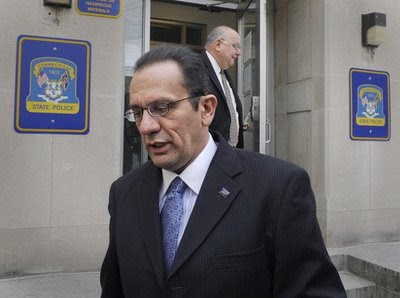 I picked up the Sunday morning Hartford Courant and almost thought that Al Capone had been reincarnated and landed in Hartford, Connecticut in the form of Eddie "Willie Nunez" Perez. Although two people at the Courant have been in the forefront on the corruption investigation, Jeff Cohen spending many hours researching tips and standing outside the Grand Jury room and Helen Ubinas' columns being critical of el Jefe. And while I'm at it, a lot of credit should go to Len Besthoff from WFSB and his I-Team reports shining light on what goes on at City Hall from the Mayor's Office to John Rose and his flagrant disregard for transparency and the Freedom of Information Act. The Courant has been relatively silent on the culture of fear and intimidation that has been, and still is, the hallmark of the Perez Administration. The Hartford Courant pretty much refused to consider an ongoing corruption investigation, including a search of Perez's home by state investigators, when they issued their endorsement of Perez for re-election in 2007. A key point of this endorsement to consider is that David Medina, who was sitting on the Courant Editorial board at the time of the decision, landed a lucrative position with the Hartford Board of Education shortly after the election. The catch phrase of the week has been "quid pro quo", in this case it appears pretty obvious, you endorse me Dave, I'll endorse you. Although the field of candidates for Mayor was large, and the Courant would have never endorsed a Republican, many thought that in light of the allegations against the Dark Emperor, oops that was the name for the marble he chose for the judgement lapse, I mean Mayor Perez, that the Courant would have remained neutral and not make an endorsement. Yet, in their endorsement they pretty much said, and I'm paraphrasing, "we know Eddie is bad, we know Eddie is divisive, we know Eddie is not a leader and a unifier, but we endorse him anyways".


Well, what changed in less than a year and a half? Although most agree additional charges and additional arrests are coming, as stated in the release from the States Attorney's Office, the facts contained in the arrest affidavit for the first round of arrests were well known to the Courant editorial board in 2007 when the Courant made their endorsement. Although Jeff Cohen and Helen Ubinas have seemed to remain on point from the beginning, it was somewhat disingenious to see the "All Perez Corruption Edition " of today's Courant.


Don't get me wrong, I want to see every last fact about this corrupt administration in the public domain, but not to sell newspapers. The behavior has been obvious to many of us for a couple of years and didn't begin on Tuesday, January 27, 2009 at 10:00am on the steps of Troop H in Hartford. The Courant endorsed Perez and must now share in the blame along with the Hartford City Council and others, for allowing his corrupt activities to flourish unchecked for so long.
Posted by KEVIN BROOKMAN at 1:44 PM 3 comments: