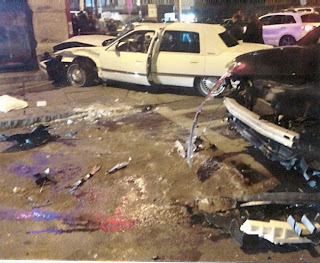 If nothing else, you have to give Mayor Segarra's Chief of Staff   Jared Kupiec credit, he is a survivor. Most people would be on the unemployment line by now with this many stunts to their credit. The big question on the minds of many is why.
Most people would be gone after one or two questionable incidents, but with Kupiec the hits keep coming and he still has a job. For someone as Segarra once told me "has his back" he sure seems to be drawing much attention to.Segarra.
The  caviar, the p-card abuse, the HPD gym power grab, and the list goes on.
Now one of the regions best investigative reporters, Jeff Cohen of WNPR seems to be digging his teeth into something that has been buzzing around City Hall for months.It seems that the Mayor's Chief of Staff  was involved in an accident that resulted in personal injury at the intersection of High and Allyn Street on January 20, 2013.
Many questions had arisen as to how the accident was handled, who was actually driving, Kupiec or the operator listed on the accident report and was alcohol involved. Now Cohen has verified at least one item  that was in question, was the right person found responsible for the accident.
You can read Jeff Cohen's Report on WNPR here
.  It seems that after reviewing the accident report, HPD has reversed itself and found Kupiec's passenger, I mean operator number 2 at fault for causing the accident pictured above.
Even more interesting is the company Mr. Kupiec keeps. Apparently the person listed as operator 2 may have actually been a fugitive from justice at the time. Records indicate that there was a warrant for Nicole M. Pattavina for failure to appear related to charges from a DUI Accident in Palm Beach County Florida. It is unclear whether that warrant was still in effect at the time of the crash or if it had already been served
The DUI accident the charges related to had also caused personal injury as a result of Pattavina allegedly driving drunk.
More on Pattavina here
The HPD Accident Report