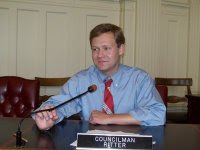 Councilman Matt Ritter will be announcing his run for the State Legislature on Wednesday, March 31, 2010 at 5:30pm. The announcement will take place at the Noah Webster Elementary School at the corner of Cone and Whitney Street in Hartford's Westend.

Ritter will be challenging Representative Ken Green who currently represents the 1st District which covers portions of Hartford and Bloomfield
Posted by KEVIN BROOKMAN at 8:32 PM 8 comments:

Judge Dennis Eveleigh, who served as the single Grand Juror hearing evidence that led to the arrest of Hartford Mayor Eddie Perez, has been nominated to fill an upcoming opening on the Supreme Court bench. The opening is being created by the retirement of Supreme Court Justice Christine S. Vertefeuille, who has announced her retirement as of June 1, 2010.

Judge Eveleigh, 62, has served in the Waterbury Judicial District since 1998 as a Superior Court judge.

In addition to Judge Eveleigh, Governor Rell nominated 10 individuals to become Superior Court judges. Those nominations may prove more difficult to fill in light of resistance from politicians concerned about budget constraints.

HERS IS THE FULL TEXT OF THE PRESS RELEASE FROM GOVERNOR RELL AND THE INFORMATION ON THE 10 SUPERIOR COURT JUDGE NOMINEES:

"Christine Vertefeuille has been a thoughtful and measured jurist during her decade on the Supreme Court bench," Governor Rell said. "The trust we place in justices of the Supreme Court is immense - yet it is a challenge Justice Vertefeuille has risen to meet time and again. Whether dealing with fine points of the law or sweeping issues of justice, she has long given the people of our state the benefit of her reason, her compassion and her knowledge of the statutes. I thank her for her many years of service to the State of Connecticut and wish her all the best in her future endeavors."

Justice Vertefeuille, a graduate of Trinity College, received her law degree from the University of Connecticut in 1975. She was in private practice from 1975 to 1989, when she was appointed to the Superior Court. She was appointed to the Appellate Court in 1999 and made a Justice of the Supreme Court on January 3, 2000. She served as the Administrative Judge of the Appellate System from June 1, 2000 to July 31, 2006.

Judge Eveleigh, 62, has served on the Superior Court in Waterbury since October 1998. A 1969 graduate of Wittenberg University, he obtained his law degree from the University of Connecticut in 1972 and worked as an attorney in private practice prior to being nominated to the bench.

"I have every confidence in Judge Eveleigh and I am grateful he is willing to take on the task of serving on our state's highest court," Governor Rell said. "The Supreme Court is the final arbiter of issues that touch all of our lives. Service on the court requires experience, a depth of knowledge and an understanding of the impact that the law can have on everyday life. It also requires a commitment to making the actions and operations of our courts open and transparent to average Connecticut residents. I know that Judge Eveleigh possesses these qualities and shares my commitment to openness - and I believe the Legislature will agree."

The Governor is nominating 10 people to the Superior Court, filling vacancies left by promotion, retirement or other moves. There are currently 20 vacancies on the Superior Court bench, including the opening created by the elevation of Judge Eveleigh.

"These nominees are all people who have already served their communities - and in many cases, the state - with distinction," Governor Rell said. "They have records of service that go beyond the purely professional to include work with charitable and social organizations, educational institutions and other groups. In every case, they have demonstrated the thoughtful, sensitive and informed judgment that is needed for people who we place in such a prominent position of power and decision-making.

"I am proud to nominate these 10 candidates," the Governor said. "These positions need to be filled at this time so that we can ensure the continued efficient progress of business in our court system. All of these nominees are immensely qualified and I look forward to their confirmation by the General Assembly."

The nominees submitted by Governor Rell are:

• Laura Flynn Baldini, 39, of West Hartford (Republican): Currently an attorney in private practice, Baldini is a 1992 graduate of Yale University who obtained her law degree from Seton Hall University in 1996. She worked previously as an attorney at Updike, Kelly & Spellacy from 1998 to 2003 and at Ohrenstein & Brown from 1996 to 1998.

• John L. Carbonneau, 54, of East Lyme (Independent): Carbonneau currently works as an attorney in private practice. He received his undergraduate degree from the University of Connecticut in 1977 and his law degree from the Catholic University of America in 1980. He worked previously as an attorney at Kaplan & Brennan from 1996 to 2000 and at the Connecticut Laborers' Legal Services Fund from 1984 to 1996.

• Susan A. Connors, 44, of Old Lyme (Republican): Connors, an attorney with Krevolin, Roth & Connors since 1995, received both her undergraduate and law degrees from the University of Connecticut, graduating with her law degree in 1991.

• John A. Danaher III, 59, of West Hartford (Democrat): Currently the state's Commissioner of the Department of Public Safety, Danaher is a 1972 graduate of Fairfield University. He received a master's degree from the University of Hartford in 1977 and his law degree from the University of Connecticut in 1980. He served more than 20 years as an Assistant United States Attorney and interim United States Attorney; he also worked for Day, Berry & Howard from 1981 to 1986.

• Jane B. Emons, 59, of Woodbridge (Democrat): Emons has served as an Assistant Attorney General for the State of Connecticut since 1996 and worked previously in the New Haven State's Attorney's office from 1978 to 1988. She graduated from Kirkland College in 1971, received a master's degree from the University of North Carolina in 1972 and obtained her law degree from Suffolk University in 1977.

• Robert L. Genuario, 57, of Norwalk (Republican): Genuario has been Secretary of the Office of Policy and Management (OPM), the Governor's budget agency, since 2005. He served previously as state Senator from the 25th District, representing his native Norwalk, from 1991 to 2005. He also served 10 years on the Norwalk Board of Education, from 1981 to 1991, and worked as an attorney in private practice from 1978 to 2005. He received both his undergraduate and law degrees from Villanova University.

• Brian J. Leslie, 42, of Wallingford (Republican): An Assistant State's Attorney since 2000, Leslie is a 1990 graduate of Fairfield University and received his law degree from Boston College in 1994. He worked previously as an attorney for Farrell, Leslie & Grochowski from 1994 to 2000.

• David M. Sheridan, 54, of Manchester (Democrat): An attorney with Levy & Droney since 1990, Sheridan graduated from the University of Arizona in 1981 with two undergraduate degrees. He received his law degree from the University of Connecticut in 1985. Before joining Levy & Droney, Sheridan worked for Cohen & Channin from 1985 to 1990.
Posted by KEVIN BROOKMAN at 5:42 PM No comments: 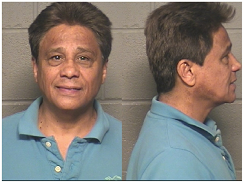 Another one for the "Only in Hartford "file.

Ten men were arrested on charges including patronizing a prostitute as well as other motor vehicle and drug related charges.

One of the individuals arrested was Luis Colon, 62, a resident of Windsor.

Mr. Colon is also a longtime "community organizer", having previously been the director of the New Britain Avenue Merchant's Association, he has also been employed by the "CEDF" Connecticut Community Economic Development Fund.

The interesting part though is that at the time of his arrest, Colon is working for "SAMA", the Spanish American Merchants Association as a consultant. Colon's salary is apparently being paid through a grant from the "MDC", the Metropolitan District Commission as part of the Clean Water's Project. A receptionist at SAMA confirmed in a phone conversation that Colon is in fact working for SAMA as a consultant.

An MDC representative who spoke on the condition of anonymity also confirmed that Colon was employed as a consultant for the Clean Waters Project in conjunction with a grant paid to SAMA. Colon is working out of an MDC Office at 499 Franklin Avenue, only a few blocks from the location where he is accused of attempting to solicit an undercover police officer for sex.

Colon is supposed to be working with neighborhoods to reduce the potential impact of the Clean Waters Project on the quality of life of Hartford residents.

I think that most Hartford residents would feel that prostitution potentially has more of an impact on quality of life issues than the MDC ever could.

On the bright side though,even though the MDC apparently has problems providing jobs to local residents, Colon seems to have no trouble spending his money to support the local economy.....oh yeah, allegedly.

Colon's first court appearance was today. Neither Julio Mendoza, the Executive Director of SAMA nor the MDC have returned calls for comment.