According to sources, a Hartford Police Department was assaulted last night during an off duty incident. Lieutenant Paul West was reportedly assaulted during an altercation in his Windsor home last night.

Windsor Police are investigating the incident. Lt. West was transported to an area hospital by ambulance where he was receiving treatment for his injuries as of late last nigh
Posted by KEVIN BROOKMAN at 2:32 PM 5 comments: 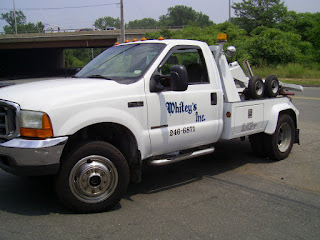 Watch the video above and you will see at about the one minute mark when the driver realizes he struck another vehicle and he gets out to try to put the fender back in place on the car he is trying tom tow.

The victim of Whitey's actions works with a family in Hartford that had a verbal agreement with their then complex manager that she could park in their parking lot during these working sessions. On 2/19/19, after a disagreement with the family, the complex manager chose to retaliate by calling Whitey’s Towing to have her car towed from their lot.(The property manager eventually admitted to their retaliation and provided the security footage above)  In the video from the security cameras of the complex, the tow truck driver towed her AWD vehicle with its rear wheels on the ground and promptly towed my vehicle into another on the lot.  Towing an AWD car on its rear wheels can cause severe damage to the transmission. I wish I could say that this is where the bad experience ends, but it does not.  The tow truck driver can be seen getting out of his vehicle to check the significant damage and then choosing to drive away without notifying anyone or doing anything to rectify the situation. In addition to not notifying anyone of the damage caused, the tow truck driver failed to report the towing to the police as is required by law. Because of this, she believed her car to be stolen when she came outside and did not see her vehicle and the police advised her that they had no record of the tow.

Finally, she was able to connect with someone who advised her that her car had been towed and got in touch with Whitey’s to get her car back. Here is where things took a turn for the worse, surprising, the victim was already aware of other troublesome actions of Whitey’s towing.  When she retrieved her vehicle, at 9pm at night, when it was not possible to see the damage for myself, the driver from Whitey’s did not tell her about the damage. Instead he condescendingly bragged to her about going back to “rape” the rest of the cars at the complex she was at.  Unfortunately the absolutely disgusting rape joke wasn’t as bad as this gets. This driver continued his misplaced condescension by telling her that her car has a “special clutch” that allows it to be towed on it’s rear wheels when she asked if he’d used a flatbed to tow her car. No such thing exists, as confirmed by my dealership and later admitted by Whitey’s. Either their driver has absolutely no business towing cars or is an especially stupid liar given the easy discredit of his story.

The next day, it snowed, so she was unable to, nor had any reason at that point to inspect my vehicle for further damage.  On Thursday following the incident, she did find the damage caused by Whitey’s crashing my car into another vehicle by the tow. At that point she obtained the complex security footage that confirmed their utter incompetence. She immediately contacted Whitey’s in an attempt to maturely have the situation resolved.  Instead she was met with utter disrespect from every employee she spoke to. They either straight up hung up on her or advised her that Ron, the owner, was not in, but they’d have him return her calls. He never did.

After a week of being ignored, she filed a police report.  While she was filing her report, the police called Ron who acknowledged that Whitey’s was at fault and stated he would repair the damages.  When she contacted Ron following this, she was met with complete sarcasm and continued disrespect, but ultimately he apologized, advised her that he had fired the driver from the video, and offered to have his friend’s garage fix her car.  As is her right, she did not want the people responsible for her car’s damage being the ones to “fix” or “estimate” the amount of damage they caused. The victim explained to Ron that she would feel more comfortable getting an estimate from an independent third party shop. Ron asked that she send him a copy of the estimate prior to having any work done. Since then, Whitey’s has not returned any of her phone calls. Her insurance agency reached out to Whitey’s and they are now denying all liability despite the video evidence, admission of guilt to the police, and acknowledgement of fault to the victim. Whitey's Towing has an "F" (failure) rating with the Better Business Bureau ACCORDING TO THE BBB webpage and despite the claim that they tow for the Hartford Police Department, they DO NOT. Their contract with the Hartford Police Department was not renewed and they no longer tow for HPD.The on-line reviews and customer complaints on the BBB website depict other horror stories similar to the experience above.https://www.bbb.org/us/ct/hartford/profile/towing-company/whiteys-inc-0111-77000757 One person gave some very wise advice in her complaint "Thisplace needs to be shut down asap. The ********** that I talked toneeds to have therapy. Avoid dealing with this place if at allpossible. "In the meantime, the predatory towing practices of Whitey's and other companies that victimize the people of Hartford need to be looked at, and better regulated by the City and the Hartford City Council, this has gone on for far too long. DMV should also be looking into this. I am not sure why no charges for evading have been brought yet by HPD for the drivers actions.

Calls to Ron at Whitey's for comment were not returned, surprise surprise and I experienced the rudeness of the business myself and clearly customer service is not their strong point.

THE ANSWER TO THE QUESTION

"Just wondering. Would you support re-hiring a Police Officer who was terminated for stealing?"

Yesterday, I posted the above question to gauge the response. The answer was a resounding "NO", and was almost unanimous.

I was inundated with calls and text messages asking me "Who is HPD hiring back?"

The answer is no one, but I was hoping to show the hypocrisy of Hartford and its political process.

The two most likely front runners in the Mayoral campaign are both not the best Hartford has to offer. Maybe instead of going to vote and holding our noses for the candidate who "stinks" the least, we should be focused on changing the process to find and elect the best we can and stop settling for the highest bidder to buy the Mayor's Office

The choice is ours.
Posted by KEVIN BROOKMAN at 4:35 PM 7 comments:

According to sources within the Hartford Superintendent of Schools Office, speaking on the condition of anonymity, suspended Chief Operating Officer for the Hartford Schools has been terminated as of last week.

Jose Colon-Rivas had been on administrative suspension over what sources had said was an issue over missing  laptops or notebooks.

The Superintendent of Schools Leslie Torres- Rodriguez continues to remain in her command bunker and refuses to answer any questions over the alleged theft or impropriety claims that resulted in the suspension. Torres-Rodriguez has  refused to cooperate with City Auditors looking into the matter.
Posted by KEVIN BROOKMAN at 4:21 PM 33 comments:

WOULD YOU SUPPORT RE-HIRING A POLICE OFFICER WHO WAS TERMINATED FOR STEALING?

Would you support rehiring a Police Officer who was terminated for stealing?

Simple enough, let me know what you think.
Posted by KEVIN BROOKMAN at 1:11 PM 6 comments: