Manchester Police are today investigating the robbery of a Manchester gas station. An arrest was made within hours due to the great planning by the suspected robber.

After being picked up, the suspect proceeded to Manchester, apparently committed the robbery, and then promptly returned to 200 Mather Street, by the same cab, to relax after a hard days work.

In the meantime, Manchester Police began investigating the robbery, and of course the Yellow Cab stood out as a getaway car. Yellow Cab was contacted for additional information. Shortly thereafter, the suspect once again called "666-6666" to serve his transportation needs. The only difference this time was that when he was picked up by Yellow Cab his driver was a Manchester PD detective.

With the assistance of Hartford Police, the "dumbest Hartford criminal of 2010" nominee was promptly taken into custody.

It is early in the year, but I think it might take some real stupidity to beat this one, but you never know.

Happy New Year.
Posted by KEVIN BROOKMAN at 11:31 AM No comments:

EDDIE PEREZ MAKES "TIME" MAGAZINE....AND NOT AS MAN OF THE YEAR 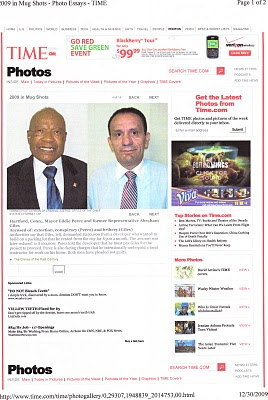 Once again Hartford Mayor Eddie Perez has made our city proud. Perez is profiled in Time Magazine under "2009 in Mugshots" along with his alleged co-conspirator Abe Giles. Both of their mugshots can be found by clicking here:
Posted by KEVIN BROOKMAN at 1:01 PM 7 comments: