Another family that is dealing with the loss of a loved one at Christmas is the Foley family of Tolland.

John Foley was the recipient of a kidney transplant and from his daughter Karen, and the Foley's are featured in the video below.Please take a moment to consider becoming an organ donor and watch the video below
Posted by KEVIN BROOKMAN at 8:11 PM 17 comments:

EVEN AFTER DEATH, THE MESSAGE LIVES ON 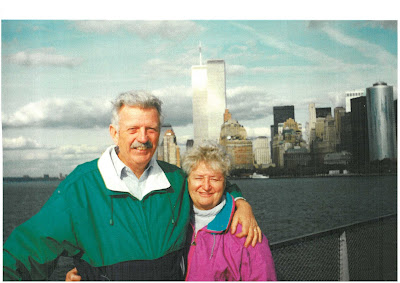 Today marks the 9 year anniversary of my father's death after a long battle with Cancer. I don't think it is ever easy dealing with death, but it seems to be more difficult at the holiday times. This is the time when families should be together enjoying a strong bond as a family, celebrating the people who have held the family together throughout the year and providing the important messages and guidance on growing up through the years to be decent human beings.

I clearly remember my fathers last Christmas. he was close to death at that point from a long battle with colon cancer that eventually spread to his liver and was inoperable. So many thoughts come back thinking about the daily challenges and the strength both he and my mother showed throughout the years long battle. Trips to different hospitals and clinics looking for that miraculous silver bullet or experimental treatment that would save his life and keep him with us for a few more years.

Toward the end the reality finally set in and we realized that most means had been exhausted. It was suggested that he spend what was going to be his last Christmas at home in a more personal setting. It was set to release him two days before Christmas and my mother , who was always into the Christmas season, decorating, baking making sure everyone felt special with a personally chosen gift for them under the tree. was far from celebrating mood.

I am not sure how I did it, but I was able to leave the hospital before he was released, go buy a Christmas Tree, get to their house and set it up and decorated it before they got home. They were both surprised and I still remember my father sitting in his leather lounge chair Christmas morning before the tree, assuming his role as the head or our family one last time.

You need to understand a little background here. My parents were like newlyweds, even after 56 years of marriage. As kids, we never saw our parents argue. My father never complained about my mother, and his behavior showed that in his eyes, his wife could do no wrong. I never once heard him criticize her cooking or cleaning or anything, everything she did was perfect. I grew up with the Cleavers as my parents. And I mean that in an appreciative way.

I remember my mother up every morning having a hot breakfast ready for my father before he would leave for work and he worked for Connecticut Natural Gas, so during winter months his arrivals back home were usually pretty late  as he handled "no heat calls".No matter what time he got home though my mother would have a hot meal being kept warm for Dad. This was long before microwaves so it took some effort on her part.

After he made it through Christmas that year, it was necessary to get him back to Hartford Hospital for his final days. His Birthday was January 4th, he died on January 6th. The day we knew it was ending was a constant flow of friends and family through his hospital,It seemed odd that the man lying in the bed in front of  us was close to his last breath, but it seemed more like a celebration of his life. Almost everyone that came in brought food or something and the stories flowed freely all day.

One of the most comical points occurred later in the afternoon, if there can be a comical point at a time like that. My sister, who was always "daddy little girl" was leaning over my father sobbing as she realized the end was near. My father, who appeared out of it most of the afternoon, in a near comatose state.opened an eye and looked at her as she was sobbing and said loud enough for everyone to hear" don't get any of that snot on me ". The comedian right until the end, that was my dad

Many of our friends that came in had more stories to tell about the times they spent with my mother and father than they did with their own families. It is a tribute to my parents that most of our friends still call my parents "mom and dad" to this day.

Even my parents local priest was surprised when he came in to give my father the last rites. It wasn't real reassuring at the time, but he pointed out that this was exactly what death was supposed to be about. Remembering and celebrating the joy of my father's life and how many people he touched.

My mother knew she was about to lose her best friend, someone that had been by her side almost constantly for 56 years, but she has dealt very well and shows her strength everyday she faces her own challenges now.

The ongoing years don't seem to make the loss any easier, but the life lessons my mother and father taught us seem to become more valuable every day and I see more and more of my fathers actions in me as I get older.

I feel sorry for people growing up that don't have the luck of a strong set of parents to teach right from wrong, and I am thankful everyday for mine
Posted by KEVIN BROOKMAN at 8:03 PM 2 comments:

Hartford Assistant Fire Chief Reginald Freeman resigned from his position abruptly this morning in what several sources have confirmed was  a contentious relationship between Fire Chief Edward Casares and his remaining Command Staff.In a short e-mail, Freeman announced his resignation this morning, stating

This morning I submitted my resignation to the City of Hartford. I would have liked to had seen you guys and the team before leaving but the timing didn't necessarily mesh with when I have to report to Texas.

I want to personally thank each and everyone of you for your contributions to the city and department during my tenure as your Asst Chief. All of you (and the personnel under your command) made my job very easy. Continue to do great things and keep ethics and morality first and foremost before all things else. Please tell everyone that I said "Thank You" an I appreciated everything that they have done, and everything that they do. God bless you all."

Sources have confirmed that the relationship had become extremely volatile recently with Freeman being ordered by Casares not to contact him directly but interact with Casares through Assistant Chief Huertas instead. Sources also confirmed that that Freeman had fled a discrimination claim against Casares with the City.

Freeman also apparently provided a personal loan to Casares of $5000.00 to assist Casares in having his son defended and released from jail on narcotics charges after Edward Casares III was arrested recently. Casares apparently approached Freeman to borrow the money and Freeman made the loan voluntarily, but the relationship became more strained over eventual repayment of the loan according to sources familiar with the matter at the Hartford Fire Department.

Casares had personally recruited Freeman and encouraged him to take the position while attending a Conference in Atlanta.
Posted by KEVIN BROOKMAN at 7:03 PM 20 comments:

WILL ROBLES GET A/R?

Several sources familiar with the Robles case have confirmed that the former Hartford Police Officer and 6th District State representatives case will probably come to an end tomorrow after he makes an appearance in Hartford Superior Court. It is believed that Robles will be granted a special form of probation available to first time offenders known as "Accelerated Rehabilitation"..

According to sources, several conditions will be imposed on Robles by the court, including that he agree not to try to re-gain his position as a Hartford Police Officer and not to seek employment as a police officer in the future, not to run for public office for a period said to be five years and finally make full restitution to the City of Hartford for the amount that he is charged with stealing from the City of Hartford through his time card fraud scheme.

This court action will end Robles's arrest that has wound its way through the courts over the last couple years and resulted in Robles's political loss to incoming State Representative Edwin Vargas who will be sworn in this week as Hartford's new 6th District Representative.

In an ironic twist, the same investigator who had applied for Robles's arrest on charges of time card fraud and abuse has now this past week become the subject of a Hartford Police Internal Affairs investigation into similar charges of his own.

To read more on the Robles case, click here
Posted by KEVIN BROOKMAN at 6:32 PM 24 comments: