STRIKE UP THE BAND , IT IS TIME TO CELEBRATE

The good news keeps coming from Hartford City Hall. Mayor Pedro Segarra announced yesterday that he has cut Hartford's mill rate 1/2 a mill. That combined with the herculean work of the Council, amounts to a full mill reduction for the upcoming year. Since the mill rate has increased over 30 mills in the last ten years, any decrease is good.

Luckily for Hartford's business community, at the rate of 1 mill a year reduction, in 30 years we can once again compete with most other Connecticut municipalities. The next highest mill rate compared to Hartford's 73 mills is New Haven at 43 mills.

To the business community, please hang in there, 29 years to go at this rate. 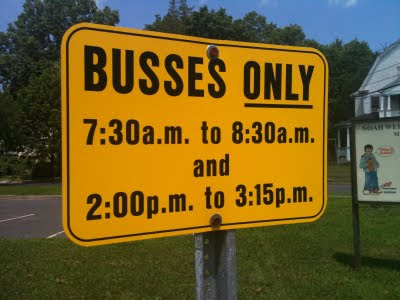 Now that we have a new Superintendent of Schools starting in Hartford, hopefully there will be a focus on the basics. Maybe we can concentrate on the little things that make a difference, like proper spelling.

The sign above is at Noah Webster School on Whitney Street. The proper spelling for more than one bus is "buses".

Don't we pay supervisors to catch things like this?
Posted by KEVIN BROOKMAN at 2:08 PM 10 comments:

ANOTHER POINT OF VIEW ON WOODEN'S PREMATURE WITHDRAWAL

For those that feel starved for their Hartford news, another good source that tends to focus on Hartford issues is the Hartford Guardian. If you aren't familiar with it, click here and take a look. The Guardian is more than a blog, it has the feel and look of a more "on-line" newspaper.

Several people sent me the link to their piece today on Wooden's withdrawal from the Mayoral race. The piece is on point and says what many, myself included, had said directly to Wooden.

Skin color or race alone doesn't make a candidate. It is what is behind the skin that matters and voters are smart enough to realize that.

MORE THOUGHTS ON LAST WEEKS POLITICAL ANTICS, BUT NOT BY ME

I don't usually do this, as far as posting other peoples thoughts, unless it is in the comments section. The reason I am posting this letter which was posted first on Facebook by J. Stan McCauley is that I think it says what many of us were thinking last week after Shawn Wooden dropped out of the Mayor's race. A move which Governor Malloy openly admitted was orchestrated by him.

Here is Stan's letter, and although Stan is a friend of mine, I am posting it because it says what most people are thinking and it is right to the point.

Open Letter to the Hartford Democrat Town Committee
by J Stan McCauley on Monday, July 4, 2011 at 1:18am.

I was asked by the HDTC: In what way will you, as Mayor work with the HDTC?

Let the following reflect one of the ways:

On Thursday July 21, 2011, the Hartford Democrat Town Committee will cast votes to endorse its candidates for the next Mayor, Treasurer and City Council members of Hartford. This is an awesome responsibility for those HDTC members that represent you the residents of Hartford. They must give this serious consideration because their vote must reflect the will of the people. It is after all the people's government.

Last Sunday July 3, 2011 on my weekly radio address I talked about this awesome responsibility. You can listen to it by logging on to www.mccauleyformayor.com click on the “Listen to radio show” link.

While I believe that I am the best choice for Hartford's next Mayor, that is not for me to decide. That decision is up to you the people of Hartford. I encourage you to call your Hartford Democrat Town Committee members and tell them to vote for who you think will make the best Mayor for Hartford. Because they can not afford to get this wrong.

There are some who believe that the answer to that question is NO. Can Hartford residents govern themselves? This is the question that has been put forth. Recently, the Governor weighed in on the subject and said that he was doing so for the good of the Democrat Party. It is telling when the “Head” of the party directly gets involved in a municipal election, even if the municipality is the capitol city.

The bottom line is this.

■The message must be sent to Connecticut and the world that Hartford can and will manage it's own affairs.

■The message must be sent that the HDTC will not have it's choices made for it by anyone other then the people of Hartford.

■Help your town committee stand strong. Call them and tell them who you want as your Mayor, Treasurer, and City Council members. Together we as One Hartford - the residents, businesses large and small, the Hartford Democrat Town Committee, City Council, Treasurer and Mayor can make Hartford one of the top 10 small cities in the United States.

■You can call your HDTC member because they are your representatives and they work for you.

■Tell the HDTC that the world is watching and Hartford's future depends on them.

■Tell the HDTC that you sincerely hope that their vote reflects the communities they represent.

■Remind the HDTC that if their vote doesn't reflect the results in the primary on September 13th that it will be clear that they are not the voice of the people.

■Tell the HDTC that you want a Mayor, Treasurer and Council that is accountable and demonstrates real leadership, real governance, and real vision.

And to my readers, this is in no way an endorsement of Stan's campaign for Mayor. There is a long way to go and I hope that the frontrunner will not be whoever raises the most money, but will be the one who shows the best vision for Hartford
Posted by KEVIN BROOKMAN at 12:43 PM 22 comments: