NOW THIS IS PARKING ENFORCEMENT

Apparently the Mayor of Vilnius, Lithuania was upset by the chronic parking violations blocking the City's bike lanes. He took matters into his own hands, accompanied by the driver of an armored personnel carrier, and sent a message to the illegal parkers. (double click on the video to watch it full screen)

This might send a good message in Hartford, but I'm not sure HPD could afford the lost cruisers. 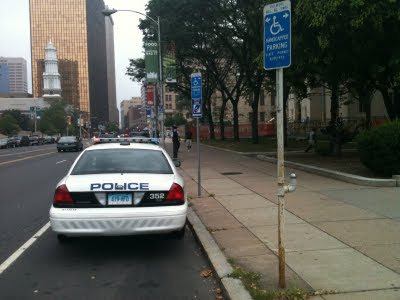 SOMETHING IS VERY WRONG WITH THIS PICTURE

Early this morning, Hartford recorded its 21st homicide for the year. That might not seem too bad for those that compare us to New Haven, we have been running neck and neck for the lead with them. New Haven currently is at 19 homicides for 2011.

New haven isn't known for any stellar government operations and neither is Hartford. But then look at the greater picture and let's compare Hartford to Boston. Boston, a city almost five times as large as Hartford population wise (Population in July 2009: 645,169) is only at 26 total homicides for the year. What are they doing right as compared to what we are doing wrong.

I hate to beat a dead horse here, but when we brand the City as recommended by the Canadian marketing firm, do you think visitors or potential companies moving here will pay more attention to the crime statitics and how many cops we have on the streets or do you think they will feel more comfortable coming here knowing that Hartford's Chief Operationg Officer, David panagore, is hiring four new assistants?

It still does not make any sense to me that we consider spending $100,000,000, yes that is $100 million dollars, on some crazy skating rink proposal to link Bushnell Park to the Riverfront at the same time we have eliminated money from the Police department budget and cut new officers from the latest recruit class.

What am I missing? Can anyone apply some logic to this to help me understand?

Maybe a suggestioin for a possible "brand", let me know Canadian's what you think of this if we keep going in the direction we are going..."Hartford, we are better than Boston...when it comes to homicides"
Posted by KEVIN BROOKMAN at 1:10 PM 16 comments:

Hartford's 21'st homicide of the year took place this morning after an early morning shooting at 125 Benton Street.

The victim was pronounced dead at Hartford Hospital at 5:06am.
Posted by KEVIN BROOKMAN at 9:22 AM 3 comments: