THIS WEEK ON "1 HARTFORD" 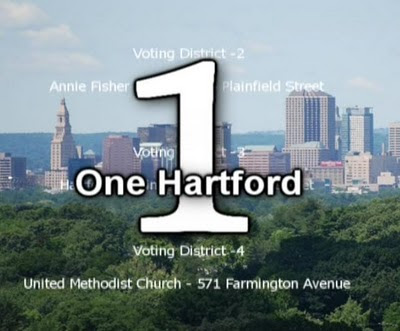 On this weeks program, February 13, 2010, we spoke with Hartford Attorney Bruce Rubenstein. We questioned him regarding his challenge for the Hartford Democratic Town Committee Chairpersonship and his vision for Hartford.

The current Democratic Town Committee Chairperson was also invited but did not attend.

CLICK HERE TO VIEW THE PROGRAM
Posted by KEVIN BROOKMAN at 1:03 PM No comments:

After making Time's top 12 mugshots of 2009 featuring our Mayor Eddie A. Perez, I had hoped that would hold us over for a while as far as notoriety.

Nope, once again we are able to show our pride as a city as we place number 68 on a top 100 list. Just a hint, it is not for the most increased corrupt municipal government.

5TH DISTRICT "GILES/VAZQUEZ" SLATE UNDER SCRUTINY, OR TO BE CORRECT, MORE SCRUTINY

Apparently the actions of the "Giles/ Vazquez" 5th District Democratic Town Committee in altering a federal Census brochure is drawing attention from at least three government agencies. Two of those agencies could potentially bring criminal charges against those involved.

The attached documents are copies of a complaint filed today with the Connecticut State Elections Enforcement Commission (SEEC) by Hartford Attorney Bruce Rubenstein.Rubenstein has publicly voiced his intentions to challenge for the Hartford Democratic Town Committee Chairpersonship in March.

According to Rubenstein's complaint, the altering of the US Census brochure began to draw the attention of both state and federal investigators late last week when the altered brochure was reported. Sources are also confirming that the brochure is under scrutiny by both investigators from the State's Attorneys Office and the US Attorney's Office.

While the intent of altering the brochure by the 5th District "Giles/Vazquez"slate is unclear, it seems to imply that individuals looking for a census job should contact the 5th District slate.

More to come on this issue I'm sure.

THE RIGHT WAY AND THE WRONG WAY

After watching the antics of the incumbent Democratic Town Committee slates and posting the allegations of wrong doing, I guess it is time to post a slate doing things the right way.

After posting Friday about the deceptive means used by the 5th District Democratic Town Committee incumbents, today I received the following in my e-mail. After all of the allegations of corruption in the Democratic Party over the last couple years, it seems as though the 4th District Challenge slate has come upon a novel idea.

Tell the truth, nothing deceptive, and actually get to meet and know the people that you are asking for their vote. The mailing is attached above.

Or, hopefully, will this be the year that Hartford voters realize that our city is on the brink, headed for disaster unless we turn around the leadership vacuum. By the comments that I see posted on here, I think many people have reached the point where they are saying enough is enough.

It may seem like a minor election on March 2nd, but its importance for the future of Hartford can't be more clear.

I think that the answer should be clear to most Democratic voters on March 2nd, 2010.
Vote for the challengers and make it crystal clear to them that they have two years to prove themselves and clean up politics in our city. If not, they can be sent packing in two years also.

And the same goes for the handful of Republicans left in Hartford. Ask your Republican Town Chairperson and Town Committee members what they have done to make Hartford a better place. What has their position been on the corruption scandal? Why have they been silent when the highest elected Republican official has been arrested on corruption corruption charges along with the Mayor? How do you support Republicans when they abstain on the tough votes at budget time?

And a real tough question for Republican voters in Hartford, can you name more than 3members of the Republican Town Committee, or, can you even name the RTC members representing you in your district?