On April 5th I posted about false claims directed at me during a community meeting by Mayor Bronin. You can read that posting about the meeting here :http://wethepeoplehartford.blogspot.com/2017/04/my-sympathies-to-mayor-bronin.html

Bronin claimed that I was being critical of his hiring of a new communications person, at the same time he had laid off lifeguards for Hartford's indoor pools. Bronin told the people in attendance that I was upset because I had applied for the communications position and he wouldn't hire me. In retrospect, it is probably a good thing I never applied because I would most definitely have quit by now.

As I had stated in the April 5th posting, Bronin had come into my hospital room at Mount Sinai Hospital where I was going through physical rehabilitation after a stroke in July of 2015. Bronin, who was running for Mayor at the time was trying to get my support for his campaign. I told him that I was already supporting retired Probate Judge Bob Killian and that wasn't going to change, Before leaving Bronin said that if I changed my mind, there would "be a spot for me" if he won. If I remember the conversation correctly, he asked me where "I could see myself" and I believe I said  "in Communication's".

That was the end of it for me, There was no application, no submitting a resume, NOTHING.

I think Bronin knew he was lying, as he had to have known I never applied for anything, but it was an attempt to discredit a critic of his in public. Typical politics.

Again to quote Mark Twain, "If you always tell the truth, you never need to remember the lies". Good advice for Mayor Bronin.

The truth is I never applied for anything with Bronin as evidenced by the FOI request below. The truth is Mayor Bronin "You can't handle the truth". And Luke,  you still have my sympathies for being in so far over your head.

My FOI request for the application Mayor Bronin claims I submitted: 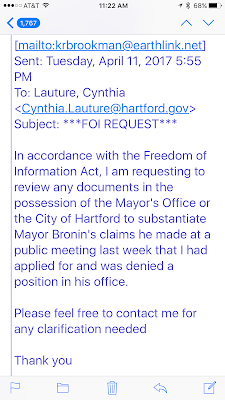 And the response from City Hall receive today: 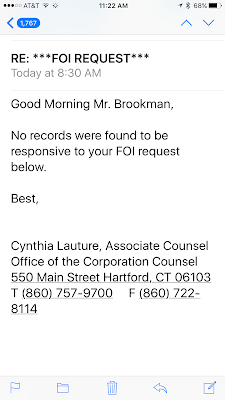 "No records were found", so who is telling the truth Mayor Bronin? That "transparency you campaigned on can be a double edge sword. Maybe it is  time for Mayor Bronin to take a trip to the Mark Twain House.