For those who follow the blog, it was first reported here about the alleged beating of a prisoner by two Hartford Police officers while in HPD custody.

Here is the arrest warrant affidavit submitted by Hartford Police that resulted in the arrest of Rashim Campbell and the facts laid out that led to that arrest.
Campbell Arrest Warrant Affidavit
Posted by KEVIN BROOKMAN at 8:08 PM No comments:

THERE ARE GOOD THINGS THAT HAPPEN IN HARTFORD 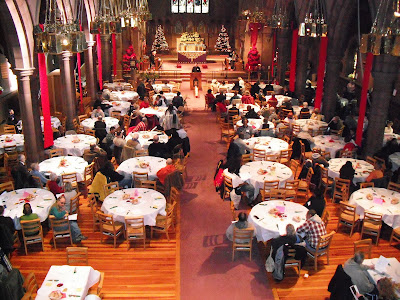 The main sanctuary of Trinity Episcopal Church on Sigourney Street, pictured above, was used Monday to host a day of remembrance for homeless people who have died on the streets of Hartford in the past year.

The event was sponsored by numerous faith based organizations and groups that provide services to Hartford's homeless population. The event was well attended and included the reading of the names of those who have died and a candle being lit after each name was announced. After the ceremony, a turkey dinner was served to all who attended.

One of the things that surprised me though was who wasn't there. There seemed to be an even mix between clergy members, volunteers and homeless people. Councilman Deutsch and Councilman Cotto both were in attendance. No other council members were there, no Mayor Perez, no other elected officials that I recognized,no State reps, no State senators, no one I recognized form the Downtown Business District, which encompasses Trinity's neighborhood. (remember how vocal they were when they thought the homeless shelter proposed for downtown would kill their businesses?)

Not surprising though was the absence of the media. Susan Campbell from the Courant was there as well as a Courant photographer. Not one television station was there though to cover a positive event happening in Hartford. Not surprising though was later that night when a suspected drug dealer died while being arrested two blocks away, the coverage by all the stations was quick.

It just makes you wonder if all the "media professionals" we have employed at City Hall are really interested in projecting a positive image of Hartford.
Posted by KEVIN BROOKMAN at 7:46 PM 1 comment: