I am still trying to comprehend how anyone could do this to  defenseless children  A child of 6 weeks  who is now dead.

Just trying to imagine what kind of animal could inflict this damage and pain on a child, broken collar bone, broken ribs, brain injury and eventually death. And maybe the term animal for the parents is too good, even wild animals don't treat their young this way.

And what kind of psychopath can inflict this damage and then go back to bed, as the police report states. I can only hope that every time these two try to sleep and close their eyes that thy will have nightmares including images of little Emily's face as they inflicted their damage and torture /

In this day and age ,there are plenty of options for parents who cant handle a new infant. Seek refuge for the child at any firehouse or Hospital Emergency Room. Abuse and possible death is not a solution.

On May 25, 2018, at approximately 1255pm Hartford Police Department Patrol Officers responded to the Connecticut Children's Medical Center in response to a report of an infant that suffered serious injuries. It was determined that the infant was approximately six weeks old and sustained severe injuries to include cranial bleeding, severe bruising, rib fractures, and a clavicle fracture. The injuries, to this point, have been described as non-survivable. The listed injuries were classified by medical staff as not being self inflicted. The infant was listed in grave condition and currently continues to receive emergency medical care. Detectives from the HPD Special Investigations Division and the Major Crimes Division responded to the hospital and assumed the investigation.

Detectives from the aforementioned divisions conducted post Miranda interviews of the victims parents, Edwin Babilonia and Ashley Perez. It was determined that the incident occurred at the families residence at approximately 0600 hours on the same date. The location was later processed with the assistance of Detectives from the Crime Scene Division. As the investigation proceeded it was determined the circumstances surrounding the incident were criminal in nature. Probable cause was later developed to charge both Babilonia and Perez in connection to the incident.
Edwin Babilonia and Ashley Perez were both found to be in violation of Risk of Injury to a Minor, and Cruelty to Persons and placed under arrest. The parties were booked and processed for the listed charges at the Hartford Police Department Detention Division and each being held on a $500,000 bond.

At this time the investigation is currently open with additional charges pending.


ABUSE ARREST by kevinhfd on Scribd
Posted by KEVIN BROOKMAN at 5:04 PM 9 comments:

Over the course of the last several years, I have had a rather sudden exposure to our Country's healthcare industry. I have met some great healthcare workers from nurses to doctors to technicians and everyone in between. I probably wouldn't be here without those people. After three strokes, a heart attack and a cancer scare  , I feel very fortunate every morning I wake up and put my feet on the floor. The people  I have met and the services I have received along the way for the most part have been exceptional, and I might even say amazing when you see life saving  technology in action,
but dealing with insurance issues have sometimes been a nightmare.

I have been under the care of an outstanding Opthamologist who in my opinion has been working miracles to save and restore my eyesight. Yesterday I had an appointment with him and he noticed my eyes were irritated and I told him I thought it was just allergies from all the spring pollen.

I guess it has been a tough spring for many with allergies and he offered to prescribe allergy drops for my eyes.

OK, so far so good. Relief , I thought, was in sight, No pun intended.

Before I reached the parking lot from the Doctors Office, I was already getting an automated text messge from the Doctor's Office, confirming that a prescription had been sent in to the Pharmacy I use and it included a link to a phone app, GOOD RX, to check pricing and other information on the prescribed drug.

Good Rx  is a great app and I look at it often to look up prescriptions as well as instructions and side effects. It is a great resource and the "GOOD RX" app is free.

I was floored with her response. She said $63.00 was the price if I paid "out of pocket" , since it was going through Insurance, the price was actually $210.59. An almost 300% markup on eyedrops. ( And loansharking is illegal, this should be also) This should be criminal to gouge the Public like this and if it was any other business the Justice Department would be investigating and indictments would be forthcoming.

And this is just one of many examples I could give. I had one prescription that I had been paying out of pocket before my stroke, my cost was $28.00 and I gladly paid it After my stroke, my Insurance company refused to pay for the $28.00 drug because "It wasn't part of their protocols", whatever that means, I guess that might be Insurance speak for "we don't get kick backs from that company". But instead they were willing to pay for a comparable substitute at almost $1,000.00 a month. $28.00 or $1000.00. big Insurance opts for the $1000.00 alternative

And we wonder why the system is broke

Our Insurance system is broken and needs to be fixed 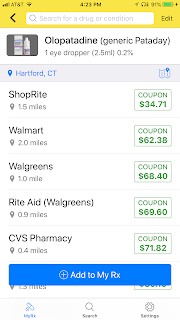 After last weeks vicious assault and stabbing of HPD Officer Jill Kidick, Hartford Firefighters are showing their support for HPD and all first responders.

Traditionally there has always been a rivalry of sorts between Police Officers and Firefighters. That is all put aside at times like this, and Hartford Firefighters came up with a special show of support this week.

The thin Blue Line flag , which is a sign of law enforcement, is now being flown on the back of Hartford Fire Department as a show of support for Law Enforcement. According to HFD Chief Reggie Freeman "We are all brothers and sisters in Public Safety"

The show of support from what I am told, started at Engine 2 on North Main Street and was quickly supported by the Hartford Firefighters Union , who purchased additional flags to outfit the apparatus. 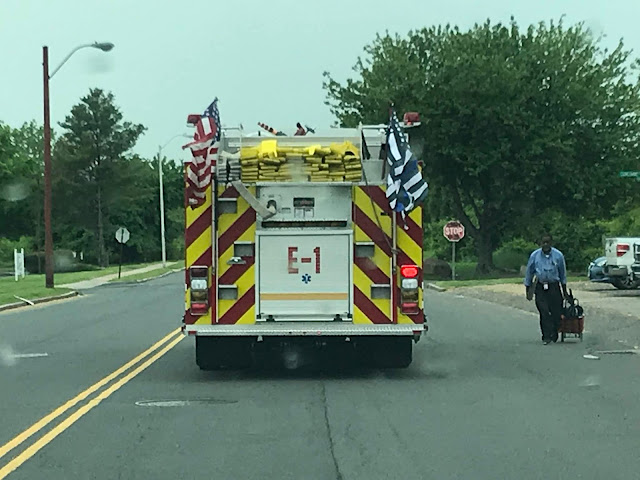