CHIEF ROVELLA SAYS NO TO O/T FOR MAYOR'S MEETING

Last night I posted about an informational meeting to be held Thursday by Mayor Bronin to discuss concerns over the Police Department's ongoing negotiations. Chief Rovella's informational e-mail was met with an e-mail from the HPD Union President encouraging Officers to put in for overtime or compensatory time if they attended.. I posted that I felt it was wrong for anyone to consider putting in to be paid for attending the meeting.

Here is a link to that  posting  http://wethepeoplehartford.blogspot.com/2017/05/wrong-wrong-wrong-let-me-just-say-it.html

This morning, Chief Rovella clarified in an email to all HPD personnel  that "by no means will the Police Department  pay overtime or credit Compensatory hours for attendance"

I haven't heard from anyone today that was upset or planning to put in for overtime for attending. In fact most were encouraged by Bronin's attempt to clarify information, or misinformation, regarding HPD's ongoing negotiations. 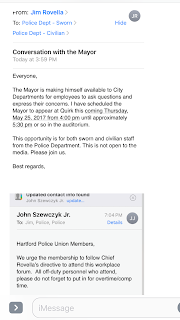 But when he does something right, I want to be fair and say it.

Bronin's interaction with our City's Unions has been terrible. Much of it accomplished through his condescending management style and the lack of communication skills I previously mentioned.

Maybe Luke has started to realize that he is not always necessarily the smartest person in the room and he actually wants to listen.

To that end, Bronion has apparently offered to meet with the various Union's membership for an informational session. The invitation to all personnel at HPD was extended on behalf of the Mayor through an e-mail from Chief Rovella earlier today.

Apparently the Mayor "is making himself available" for employees to ask questions and for the Mayor to address their concerns. If this is a sincere effort, it might actually produce some results.The meeting has been scheduled for Thursday May 25th from 4:00 to 5:30PM at the Quirk Auditorium (also home of the Hartford Police Academy)

The media apparently is not open to the Media, according to Rovella's email.

Being paid to attend  an off duty informational session is not a show of good faith to be partners in working on the City's financial problems. I am sure many of the Union's members have questions to ask directly of Bronin and may actually put some of their fears at rest.

City employees need to understand that they have had a good deal for many years and now it is time to bring them into line with private sector employees. No where in the private sector would attendance in Union meetings be allowed on Company time and definitely not while being compensated with overtime pay.

President Szewczyk, your efforts to obtain a reasonable contract for your membership have been applauded by many here on this very blog. Urging your members to put in for time and a half pay to ask questions , and get honest answers , hopefully, from the Mayor, should be reconsidered to continue building on goodwill with both City Hall and the community .