The Hartford Police Department Major Crimes Division Homicide Detectives have solve a 2013 homicide and are seeking the public’s help in locating the accused.

On September 19, 2013 at 9:31pm HPD patrol officers responded to reports of an unresponsive victim in the area of South Marshall St and Case St. Officers located the victim, 39 year old Kareem Lewis of Hartford, unresponsive, suffering from a gunshot wound to the upper torso. Witnesses reported hearing a single gunshot. The victim was transported to St. Francis where he was pronounced at 10:18pm.

The investigation by the Major Crimes Division Homicide Detectives led to identifying the accused- Shadeed Islam, Date of Birth-05/08/1980, as being the shooter in this incident.  On April 28, 2014 an arrest warrant was submitted and approved for Shadeed Islam for the homicide of Kareem Lewis.  Islam has a $5,000,000.00 judge set bond. Shadeed Islam has an extensive firearms and narcotics history with 39 previous arrests (just in Hartford). The firearm used in the homicide has not been recovered and HPD believes he may be armed and dangerous.

HPD’s efforts to locate Shadeed Islam have not been successful. The Hartford Police Department is seeking the public’s assistance in locating him. If you have any information please call Sergeant Brandon O’Brien at 860-757-4089. Tips can be posted anonymously and for a potential reward call 860-722-TIPS.

This is the third arrest warrant obtained for a homicide in a week by the homicide detectives.

Mayor Segarra once in a while does so the right thing. Councilman Ken Kennedy, who has a history of introducing resolutions to micromanage the operations of HPD, today lost another round in his scuffle with HPD. Remember the corvette engine resolutions  on the new cruisers?

Kennedy had introduced a resolution to disband both the HPD Fiscal management Unit and their Human Resources Division. Both moves would have been penny wise and pound foolish. The HPD Fiscal unit has oversight over the HPD budget and manages all purchase orders and invoices payable.

For anyone familiar with the internal Audit reports, HPD has never been a problem when it comes to fiscal management. I am not aware of any issues or questions regarding  the use of HPD P-cards( credit cards). The reason... the strict oversight of all purchases by the HPD Fiscal manager. Doing away with that oversight would be a small savings and a huge mistake.

After the Council passed the resolution it was sent to Mayor Segarra for his signature. According to sources, Segarra today vetoed the resolution, leaving the HR and Fiscal Departments intact at HPD, at least for the time being .
Posted by KEVIN BROOKMAN at 8:53 PM 5 comments: 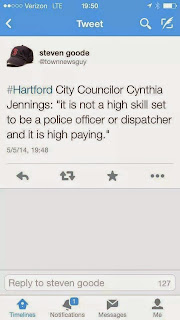 The above comment was apparently made at last nights budget session by Hartford City Councilwoman
Cynthia Jennings and then tweeted by Steve Goode of the Courant.

The big question is why this comment now? This Council has had oversight over the budget for several years and has run the City budget into the ground year after year. Are the deficits suddenly the responsibility of Chief Rovella and HPD. This Council has shared an equal part in the recklessness and over spending for years now.

Not to mention that the "high pay" Jennings' references has all been voted on and approved  by Jennings and her colleagues. Neither police officers or EST Dispatchers make up their own salaries, they are set by the collective bargaining agreements approved by the Council.. If they don't like the salaries, have a backbone and vote against them, don't bully the employees at budget time.

I am not sure how many of the Council have actually taken the time to ride with a police officer or sit with a dispatcher on a busy night. I would venture to say very few.

I would challenge Councilwoman Jenninngs to be the first one jumping out of a cruiser on Garden Street and running toward the sound of gunfire from a Tek-9 machine gun being fired in a backyard, or maybe sitting with the overpaid dispatcher taking a call from a parent whose child is choking on a piece of candy and turning blue.

See how low the threshold is as the overpaid dispatcher multitasks to hopefully save a life, entering the call for EMS and Fire to respond quickly, at the same time trying to calm down the parent who may be watching their child dying in their arms and trying to relay life saving instructions to the caller.

I have to disagree with the Councilwoman, the skill set is extrremely high, especially at those times when we as residents need to rely on our Police Officers and Dispatchers.The Councilwoman also needs to do a little more checking on the skill sets and I think she will be surprised by the number of Hartford Police Officers with advanced college degrees, including masters Degrees and Law Degrees.

No matter what the intent of the comments was meant to be, it is not what I expect from someone who should be a leader and the Councilwoman owes an apology to everyone she offended.
Posted by KEVIN BROOKMAN at 8:44 PM 43 comments: