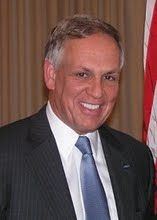 More on this later, but the Connecticut Freedom of Information Commission decided unanimously in my favor today regarding an FOI violation committed by the Hartford Schools and Dr. Adamowski. In an unusual act, the Commission also levied a fine against the person they deemed responsible for withholding the documents, Jill Cutler-Hodgman, a Hartford Schools staff person.

The documents requested included Dr. Adamowski's employment agreements, his personnel records, any documentation of payments for housing/living expenses and a record of all of Dr. Adamowski's City issued credit card expenses. The request was not complied with fully until the day before the FOI hearing in July, almost 5 months after the documents were requested, and even then they didn't provide everything requested.

More will be posted on this later.
Posted by KEVIN BROOKMAN at 6:08 PM 1 comment:

HARTFORD HITS 30TH HOMICIDE FOR THE YEAR, BUT DON'T WORRY, THEY AREN'T RANDOM

Hartford experienced its 29th and 30th homicides of the year in a double shooting this morning on Whitmore Street. Although the victims names haven't been officially released yet, the response was immediately that the average person doesn't have to worry, these aren't random acts. I'm sure that is the message that Police Chief Daryl Roberts has been ordered to release, but is that supposed to make us feel any better, or for that matter any safer? Immediately this casts doubt upon the victims and our minds race to the conclusion that they must be involved with the drug trade. I wonder though about the lives of the victims, the Nelson Street victim was apparently getting off the bus at 6:30am after coming home from work. This mornings female victim was apparently an employee at McDonald's and had been a Hartford Police Explorer. And Monday nights victim was chased down like a dog and shot inside a building on Mahl Avenue.

I fully understand that the drug trade has inherent dangers associated with it, but I am not convinced that all of Hartford's homicides are actually drug related.I'm also not convinced that the shooters in these homicides are proven marksmen. During last nights executions, there most likely were at least 40 or 50 people sleeping in the neighborhood separated from the flying bullets by only a pane of glass. Are we supposed to feel better that no innocent victims were hit when a bullet flew through a window into a child's bedroom? Yet we are told "don't worry, these aren't random acts". If someone has no fear of shooting someone down in the street, are we supposed to feel safer knowing that they have selected their intended victim, done their due diligence and are accurately executing their intended victim. Or might they be mistaken and be shooting the wrong person leaving for work or getting off a bus after a days work. But, once again we are reassured "these are not random acts".

If the acts were targeting a different group, other than drug dealers, lets say homeless people,should we then feel better when we are told "don't worry, if you aren't a homeless person, you have nothing to worry about". I'm not condoning drug dealers, but I also fail to see any leadership addressing the issue of the homicide rate and gun violence. Rather, more time is spent trying to "spin" the issue to make it look better. I'm not sure how you can make any homicide or shooting look better, but it is only a matter of time before we hear the Mayor saying "you know, crime is actually down in Hartford", unless he learned his lesson from the last time he did it. Luckily for Perez, he doesn't have to say it when he has his Police Chief saying it. And we all know that Chief Roberts has some credibility in the community, something the Mayor lost after his first and second arrests.

No one deserves to be gunned down in the street, no matter what the circumstances. But then again, "don't worry, these acts aren't random", does that make you feel any safer? And Chief, I know you remember last year how people were ready to support
you and rally behind you and your Department when you stated Hartford had lost it's moral compass. Although that wasn't well received by the Mayor, it was definitely well received by the community. Maybe another dose of that candid honesty is exactly what we need now. When 30 people can be executed in our city so far this year, we have lost our moral compass. Not just those doing the killings, but the rest of us that can sit back and accept it as business as usual says something about us as a city. Where is the public outcry?

The town of Cheshire mobilized after a vicious home invasion, are we any different?
Posted by KEVIN BROOKMAN at 5:26 PM 5 comments: