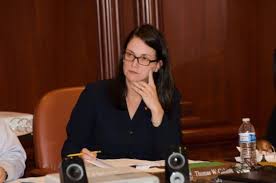 Below is the actual NYC Comptrollers Audit Report into allegations of Fraud and Misuse of Library Funds and Credit Cards, as well as a couple of other news articles.

Since Library Board member David Barrett has commented here that these accusations are baseless and were refuted prior to the Hartford Public Library hiring Bridget Quinn-Carey as the CEO, I have offered to him the opportunity to post any documents he may wish to disclose to show that the Library Board exercised proper due diligence before hiring Quinn-Carey. As of this point, no documents have been provided.

The offer still stands, but the Comptrollers Audit Report seems to speak for itself. Although Quinn - Carey's behavior isn't quit as egregious a that of Bronx CEO Galante, it is still very troubling for someone to  condone and also participate in the level of corrupt activity outlined in the allegations in the report

I have also submitted numerous FOI requests to the City to obtain further information on any background investigation or verification gathered before the hiring of Quinn-Carey as the CEO .
Stay tuned for more.

The investigation found that Galante and Bridget Quinn-Carey, the former library Chief Operating Officer (who subsequently served as the interim CEO and President), had used their organizational credit cards to make more than $310,000 in prohibited or inappropriate purchases during the 2012 to 2014 fiscal years.

SOME UNSUNG STATE OF CONNECTICUT EMPLOYEE'S 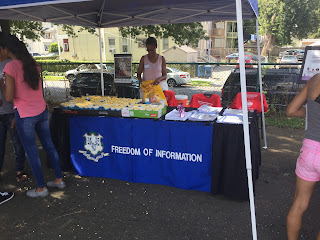 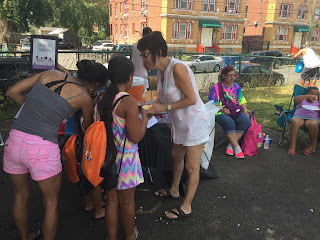 Usually when we think of State employees our minds almost immediately jump to a nightmare experience at DMV or some other State agency. But two agencies hardy ever get noticed, but they have great employees who are true Pubic Servants.

One is the Freedom of Information Commission. FOI is a State agency that keeps our government honest and transparent.. I received a quick indoctrination into FOI when I started this blog. At that time, my focus was Hartford City Hall and City Hall was about as transparent as a concrete wall painted black and covered by a black tarp to keep any sunlight from shining in. With the help of FOI and their employees, I quickly learned the ropes and learned how to obtain documents that were normally hidden away from public view.

Tom Hennick,  AttorneyValecia Harmon and Attorney Tracy Brown have always been extremely helpful in assisting me to find my way through what can be a complicated maze of obtaining documents, and they will probably admit that more than once I have put them through their paces in my quest to get to the truth. I think Tom Hennick still uses me as an example in his seminar's of how a government official SHOULD NOT respond when complying to a FOI request from a citizen. Former Hartford Corporation Counsel John Rose responded to one of his subordinates in regards to one of my earlier FOI requests through an e-mail asking "Carl, how can I shut this asshole down?" Then Attorney Rose, being the brilliant legal mind that he is, apparently didn't notice he had copied me on the e-mail before he hit the send button.

Ahh, that is what makes Hartford the gift that keeps on giving.

But moving on, Attorney Harmon and Attorney Brown are a presence at every monthly meeting of the MARG NRZ, a community group meeting I try to attend every month. They are both there and have information in Spanish and English and will answer any and all questions regarding FOI and access to public documents. Their efforts are well above and beyond what their jobs require and they even go so far as being regular participants in the MARG NRZ Annual community Day as they were the last Sunday in August, complete with bookbags to hand out to kids getting ready for back to school , bags of popcorn and some great homemade Lemonade and grape juice mixture made by Valecia's mother.

Two other unsung State employees come from the Judicial Side of State government. Prosecutor Tom O"Brien and Chris Pleasanton put the "Community" in Community Court. They are both in attendance every month and give a report on the work of Community Court. an effort that was born out of concerns starting at the MARG NRZ to enforce quality of life issues that were often not addressed by the much busier Superior Court on Lafayette Street. Residents frequently address their concerns directly with Prosecutor O'Brien on issues such as prostitution, ATV's and other issues affecting their neighborhoods.

Judge Norko, who until recently,prior to his retirement and cut back of his hours was also a regular attendee at the meetings. Judge Norko was a unique Jurist who understood and exemplified the need for the efforts of the Community Court , and the resident's always appreciated his unique perspective and attention
Posted by KEVIN BROOKMAN at 9:33 PM 1 comment:

Posted by KEVIN BROOKMAN at 7:37 PM No comments:

7
Posted by KEVIN BROOKMAN at 7:26 PM No comments:

FEDERAL JUDGE TO BRONIN ADMINISTRATION: YOU ARE WRONG ON INDEMNIFICATION OF POLICE OFFICERS

US Federal Judge Willaim Garfinkel issued a decision this week that appears to slap Hartford Mayor Luke Bronin and his decision not to indemnify City Police Officers when thy are sued over the performance of their duties.

"The City’s position, in addition to being unsupported by precedent, is bewildering. How can Hartford maintain a qualified police force when it is willing to expose its officers to personal liability for compensatory damages for civil rights judgments? What capable officer, in his or her right mind, would want to work for such a city? And what message does this send to the community, the residents of Hartford, when their governing officials promote a position that, in all likelihood, will leave them without full compensation for injuries in the event that they are the victims of a civil rights violation? The Court readily understands the need, as a general rule, to deter police officers from the sort of outrageous conduct that warrants punitive damages. But this is not that case. The result in this case, in a second trial after a jury could not reach a verdict in the first, was a close call. This case arose from a confrontation apparently instigated by Fabian Edwards, who lost his case, and involved something of a melee in an enclosed environment in which the officers were initially outnumbered.3 It is safe to say that no police officer would expect to be abandoned by his employer with respect to an award of compensatory damages in this case, even if a jury unexpectedly also awarded punitive damages. Nor should any officer expect that."

As Judge Garfinkel stated, Bronin's decision not to support his Police Officer's was "bewildering". I think one of the key points was that the officers who were originally sued , in the Judges opinion , did not display any wilfull misconduct or malicious intent but were merely performing their duty

And yes, in a violent City like Hartford unpleasant things can happen under adverse conditions. Who in their right mind would come work in a City that leaves them on their own even when they are acting in good faith. It sends , and it did send, a chilling message to our Police Officers

You can read the full decision below. Thank you Judge Garfinkel for applying common sense to this matter, even when City Hall couldn't or wouldn't

IS IT DEJA VU AT THE HARTFORD PUBLIC LIBRARY? 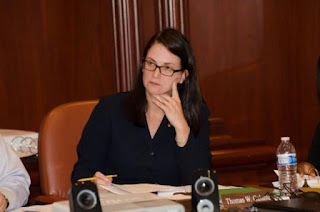 It would appear though that the Executive Director of the Hartford Public Library is no stranger to controversy. Much of that is detailed in the New York Daily News article below from 2015.
.http://www.nydailynews.com/new-york/queens/city-controller-da-irs-probe-queens-library-article-1.2284767

That article detailed allegations of misuse of funds and what the New York City Auditor described as
a "significant likelihood of fraud and/or embezzlement.Financial abuse at Queens  Library was so out of control that city Controller Scott Stringer urged  the IRS and local prosecutors to launch criminal probes against both Thomas Galante, the library’s ousted president, and his successor, Bridget Quinn-Carey.

Stringer found that Quinn-Carey used her credit card for lavish meals, personal gasoline bills and other costs that are not regarded by the IRS as deductible business expenses and that also violated the library’s own prohibition against using the organization’s credit cards for personal expenses.

According to the article “I urge the current board to have a serious discussion about whether someone who was a party to so much malfeasance can effectively lead this organization going forward,” Stringer said.

Does this pattern of behavior sound familiar? According to the article"This and other illicit activity covered in the Comptroller’s reports engaged in by Mr. Galante and by current Interim Library President and CEO Bridget Quinn-Carey (who served as Chief Operating Officer when Galante was in charge) took place while “the Library was eliminating services to the reading public, cutting operating hours of Queens branches by an average of 4 hours per week,” according to Stringer.

"Between 2008 and 2013 when library branches in Astoria, Court Square, Long Island City, Jackson Heights, Sunnyside, and Woodside, among many others, reduced hours and programs which had a tremendous impact on almost everyone–especially school children and senior citizens."

Apparently the Board decided she couldn't, and she then appeared in Hartford.

Some things never change, especially in Hartford
Posted by KEVIN BROOKMAN at 10:00 AM 102 comments:

YOUR HELP IS NEEDED

I don't think I have ever done this before, but this posting and this cause are very important to me.

I need your help and information.

I have received several calls over the past couple weeks regarding Animal Control in the City of Hartford and the killing of impounded dogs. The callers have claimed that captured dogs are not being properly advertised as required by Connecticut Law before they are killed.

And I don't want to make this an indictment of Hartford's Animal Control Officer, I understand he is overworked as the only active ACO in Hartford since the Bronin budget cuts forced the lay off of two other ACO's last year and one more is out on some sort of sick leave.

If you have had difficulty in contacting ACO's in  Hartford or in trying to recover or adopt a dog or if you have information on dogs being killed while in the Hartford pound, please contact me either by e-mail or phone or if you wish, comments can be left on this posting also.

We need to be the voices for our beloved pets
Posted by KEVIN BROOKMAN at 3:41 PM 12 comments:

HOW BROKE IS THE HARTFORD PUBLIC LIBRARY?

Apparently not very broke by the looks of some of the salaries.

A lot of discussion has been going on regarding the intention of the Hartford Public Library Board of Directors decision to close several library branches.. Below is a list of salaries paid at the Hartford Public Library.
For a relatively small operation, I just wonder how much could be saved to keep branches open by possibly paying more realistic salaries.
A Chief Administrative Officer , and an  Executive Director. And $101,151.96 for  a "Customer Experience Officer"? Is that like a greeter at Walmart?
And it looks like more "directors" on that list than a Hollywood movie set.

Hpl Salaries by on Scribd
Posted by KEVIN BROOKMAN at 11:27 AM 45 comments: