CLOSING IN ON 2 MILLION VISITS

That little counter on the right is clicking away, and it looks like this may be the week We The People hits 2 million visits.

Thank you for your continued support, readership and information that has made this blog so popular.
Posted by KEVIN BROOKMAN at 5:22 PM 10 comments:

PARKING BAN:
A City wide on street parking ban will be implemented for the approaching winter storm. The Parking Ban begins Sunday, February 12th at 11:00 a.m. and continues to Monday, February 13th at 8:00 a.m. Coordinated Police enforcement will begin Sunday, February 12th at 3:30 p.m. Parking tickets issued during the parking ban will reflect a charge of $97.00 SNOW EMERGENCY., (plus towing fees)
During this event, the Department of Public Works will again use the “Blue Light” notification system. Blue strobe lights mounted near control signals will be activated at intersections throughout the City six hours prior to a parking ban, remaining on until the parking ban is over. In the near future, additional signs will be erected indicating a parking ban is in effect when blue light is illuminated. (Thank you to We the People for pointing this omission out)
Below is a list of off street parking areas provided by the Department of Public Works where motorists are encouraged to park while the parking ban is in effect. Also listed are school lots. Please note that vehicles parked in school lots must be removed within the three hours following the end of the parking ban to allow snow removal from schools.

I will be posting much more on this over the weekend, but here is the report for those of you interested in reading about this Huge failure by the Hartford's Schools.

DID SOMEONE AT DPW FORGET TO ORDER THE SALT

You would think by this point, the City of Hartford would be tired of being ridiculed for its lack of snowplowing "prowess". I think it also shows that many of Hartford's budget cuts and layoffs are coming from the wrong end of the City Hall employment spectrum. Maybe instead of a Blight Manager, we should employ 3 or 4 more plow operators with that salary. Maybe a couple less attorney's in Corp Counsel, and a few more laborers to clear the streets. Maybe instead of Attorney's in DPW , we find a person who knows which end of a snowplow should be touching the street during plow operations.

It is not "rocket science " as the saying goes.

Today , when I saw the poor condition of Farmington Avenue and Sigourney Street, a major intersection, I told myself I couldn't just complain. I thought in fairness,I needed to check and see if maybe chemicals weren't working right because of the low temperature. I risked life and limb on Hartford's streets and ventured west to the City line.

I knew I had arrived in West Hartford when I was blinded by the sun shining off the newly fallen snow and the reflection of the sun off the wet, clear pavement. Why does a few feet and a City
Line sign make such a difference?

Then I recalled Pedro Segarra's explanation during the last Mayoral campaign. It is those suburban scoundrels coming into Hartford and sweeping the snow off their cars, crippling Hartford's traffic.Maybe Mayor Bronin can ask them not to do that....please.....during his "Bail out Hartford" regional tour.

I also understand the problems of clearing City streets with vehicles left on the streets. But I also realize that there has to be a better way to get the message out, not just when a storm is impending. It just seems some what immoral to declare a parking ban, tow residents vehicles and subject them to fees of over $200.00 per vehicle if we don't then properly plow those streets after we tow.

I know HPD tries to coordinate those efforts, but there is a breakdown somewhere. It also seems wrong to ask residents to park in school lots and then tow the cars that obey the ban because they don't get their cards back onto the un-plowed streets soon enough when the ban ends.

If we can put up the "blue light special" strobes , why can't we identify the first ten or fifteen spots in school lots as "tow free zones" for residents to park so as to not obstruct school operations. Many of these residents who are towed are Hartford's "working poor" and are quite possibly sleeping at 11:00am or whatever time they now face the Board of Education imposed towing because they are coming home from working two or three jobs just to survive

And for the dozens of residents who were towed from school lots today, let me ask why? What was the rush? Just to show that they can still be controlled? Hartford's Schools were closed today due to the snow. They are closed for the weekend, and Monday is a holiday. But I guess the Hartford BOE proved its point, they are in charge of school properties, even though those same residents they towed pay the bills for those properties. 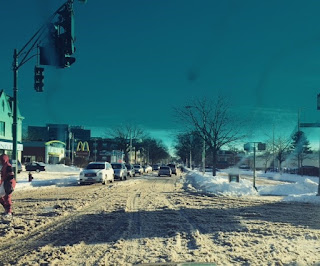 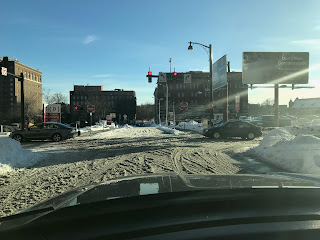 DOWNTOWN, SHOULD BE INTERESTING FOR XL CENTER EVENTS THIS WEEKEND 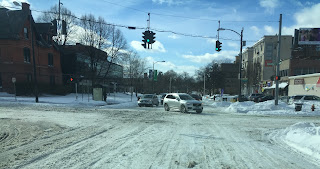 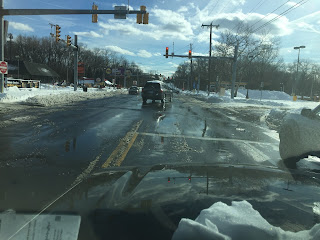 HOW DOES WEST HARTFORD DO IT RIGHT? BARE PAVEMENT, NO SNOW AND CURB TO CURB

This e-mail was sent to me this morning to explain why there wasn't signage to identify the reason for flashing blue lights around the City.

Thank you for your blog post on the blue light program.  Your blog is widely read and I appreciate your help in spreading awareness of the meaning of the flashing blue lights.  Please note that the City has installed signage at two locations: Sisson and West & Park and Main.  These two locations are gateways to the areas of the City where we encounter the highest frequency of non-compliance with parking bans.  These locations are also proximate to entrances to two of the newly-created free resident snow storm parking areas.  Additional signs have already been manufactured and will be placed as soon as possible.  Every blue light will be accompanied by a sign.  This brief delay was due to a backorder situation on the DOT standard wire-span hanger brackets.  Alternative brackets have been identified and are now in transit to the City.  Installation will proceed immediately and take approximately two days.  We are working as quickly as possible to reduce incidents of ticketing and towing while ensuring the ability of DPW operators to clear the streets curb-to-curb.  Again, thank you for getting this information out.

David A. Tanner
Deputy Director
City of Hartford Department of Public Works
Posted by KEVIN BROOKMAN at 11:05 AM 7 comments:

IT MUST BE A HUUUGE SALE AT K-MART

No, it is not an unannounced blue light special at K-Mart ( am I really showing my age by saying that or even  knowing what it means?)

I have received several calls tonight asking if I knew why blue lights were flashing at intersections around Hartford. Apparently not too many people follow the Bronin dog and pony shows or they might have known the answer.

Blue strobe lights have been installed around the City to flash brightly when a parking ban has been issued by the City for a snowstorm and to warn residents.

Clearly with the number of phone calls I received tonight, they do draw attention , but what good are they if no one know why they are there ? 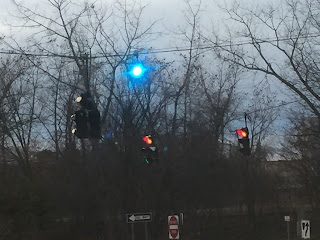 The "blue light" plan was apparently copied from New Haven and not K-Mart, but maybe we should have copied the entire plan from New Haven DPW, including the appropriate signage to let people know what the lights are for. It just seem t make sense 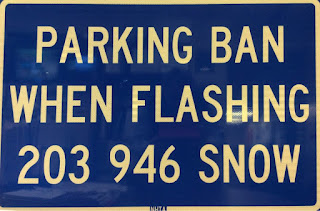 From the City:A parking ban will be in place for the City of Hartford beginning at 8 p.m. today. All on-street parking is prohibited throughout the City of Hartford beginning at 8 p.m. today February 8, and ending at 8 a.m. Friday, February 10th. All Hartford District Public Schools parking lots will be available for use. However, cars must be moved from the lots by 11 a.m. Friday. For more information, visit www.hartford.gov/snow-parking. Parking is also available at city parks, recreation and senior centers and the new "Blue Light Lots".

THERE IS NO EXCUSE FOR GETTING YOUR CAR TOWED

With a major snow storm predicted for tomorrow, a parking ban for Hartford's streets is an almost certainty.

Every time there is a parking ban, dozens, if not hundreds, of people get their cars towed in order for plows to clear our streets. This is an expensive proposition for the owners of the vehicles when they recover their cars with both the tickets an the towing fees.

In this age of modern technology and "smart phones" there is no reason for anyone to say they were unaware of a parking ban.

HPD Deputy Chief Foley has posted a link to the City of Hartford that allows anyone to be notified by text message of a parking ban. For anyone that visits Hartford or resides here and parks on Hartford's streets, take a moment and sign up. Pass it on to your neighbors or co-workers also.