MAYOR SEGARRA: IT IS TIME TO SHOW SOME BACKBONE AND LEADERSHIP, END THE NOLAN LAWSUIT

Mayor Segarra, it is time the people of Hartford have a real leader and not just a ceremonial ribbon cutter. It is time we see some leadership more concerned about doing the right thing for Hartford rather than wondering how decisions will affect specific voting blocks across the City. It is time we have a leader more concerned about working to solve the City's problems than attending fundraisers.

A real leader with his pulse on the operations of the City should not need an outside report to realize the leadership of the Hartford Police Department is spiraling out of control. A leader who is able to read blog comments, as I know you do, should put a little bit of weight on the deluge of comments on a recent post regarding HPD. If even only 10% are accurate, you have a real problem Mr. Mayor.

If you had a Corporation Counsel reviewing potential litigation, you would put the brakes on the City's liability that your court actions are most likely compounding everyday.

A leader with a conscience wouldn't just admit in private that the Brooks and the Nolan matters are wrong,. A real leader would step up, especially a leader that claims he has fought injustice his entire adult life, and put an end to what is clearly wrong.

In the most recent brief submitted by the City in the Nolan case for a hearing this Wednesday, September 7, 2011 in Hartford Superior Court it becomes even clearer that this matter is wrong and malicious. In the brief it calls attention to Nolan's actions and states “However, I would be remise(sic) if I did not redirect the Courts attention back to the most egregious aspect of Mr. Nolan’s conduct and that is Mr. Nolan’s acceptance or encouragement of donations of varying types resulting in Mr. Nolan reducing disciplinary towers"

That is the most egregious behavior? Take into consideration that the decision to terminate Nolan was brought about, supposedly, by former Fire Chief Charles Teale. But even though Nolan was soliciting for charity, Teale admitted under oath that he took a payoff of several thousand dollars from an individual after he was disciplined by the City for improper behavior ,where he pocketed money for renting out City facilities and was forced to pay the city back the money he improperly pocketed.

Teale also testified that eventually he realized taking the payoff was wrong and he donated the money to charity. The timeline on that "realization" may have been a few years though and only after he realized questions had arisen about the payoff. Teale refused to answer any questions when I asked him about it. Sources familiar with the matter said he made a large donation to Camp Courant last year, several years after he took the payoff.

Nolan solicits for charity and is fired, yet Teale takes a payoff and that's acceptable? I'm not a jury consultant, but it seems like a no-brainer to me that should boost any settlement for Nolan if the City keeps moving forward.

Real leaders need to do what is right, and don't worry about the votes. If a leader is effective, I think the voters will recognize that and the support will be there. On the other hand, I would hope after the Perez years the voters will be smart enough to recognize more fraud and pandering for votes

Over the next week I will be posting excerpts from the transcripts of the Nolan Arbitration hearings and you can read the testimony in their own words as they testified under oath. You can read about Chief Teale's payoffs and forays to strip clubs in Springfield, although he claims he didn't have a personal relationship with Nolan.

You will be able to read about the City of Hartford's witnesses that they called that made better witness for the Nolan side. Firefighters that testified they were better firefighters because of Chief Nolan's actions. Testimony that they never felt they were endangered by Chief Nolan's training, in fact quite the opposite. They testified that Nolan's actions and taught them teamwork and the need to work together, something that it seems like any firefighter putting his or her life in another firefighters hands would appreciate.

You will also be able to read the testimony of former Assistant Chief Parker where he essentially concurs with Nolan's decision to remove several recruits from the Academy class because they were unable to cut the requirements and were dangerous to other firefighters.

All in all, the City's witnesses seemed to strengthen Nolan's defense.

Mr. Mayor, as an attorney yourself, I'm sure this makes even more sense to you than it does me, please cut our losses and end this lunacy now.
Posted by KEVIN BROOKMAN at 10:22 PM 10 comments:

IS THERE ANY COMMON SENSE AT HARTFORD CITY HALL 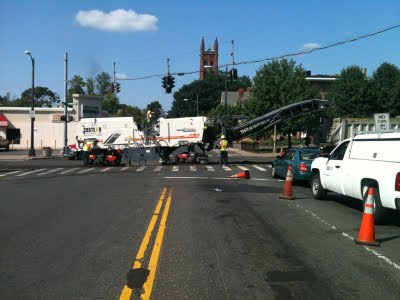 Sometimes it is amazing that Hartford as a city is able to even survive. Another perfect example happened today, almost at my front door.

Around noon time a work crew showed up at Farmington and Sigourney Street and began blocking off traffic with traffic cones and a couple police officers. It seems that someone decided to begin the "milling" process to resurface the area around Farmington and Sigourney Street. That in and of itself wouldn't be bad, we complain about the condition of our streets so a little traffic upset is necessary to repair them.

A "little traffic upset" turned into grid-lock by about 2:45PM. HPD realized it was a problem and advised the contractor that they needed to be off the street by 3:00PM to comply with their City permit.

Traffic was already a mess by then, very little was moving and from what I am told HPD supervisors began demanding the contractor shut down and open up the intersection. Then the Hartford City Hall brain trust kicked in and decided they new better about the traffic flow than HPD. The contractor was allowed to stay on the street until after 5:00PM, the noise of the horns blowing from aggravated motorists was constant, and fire apparatus and school buses had a difficult time navigating through the area.

I just wonder who makes these decisions and why even bother giving out the permits if they mean nothing. And wouldn't it maybe make sense to mill a busy intersection like that after rush hour? By 7:00PM the street has very little traffic, most people have already fled the City by that time.

Either I'm looking at it wrong or I guess common sense isn't a strong suit in Hartford.
Posted by KEVIN BROOKMAN at 6:35 PM 8 comments:

For many of my blog readers, this may be "inside baseball" and not make a lot of sense. For those readers familiar with HPD, I'm pretty sure many of you are shaking your heads also.

I'll let the comments, and I'm sure there will be plenty, speak for themselves and maybe explain the situation a little better than I can.

HPD veteran and well respected Lieutenant Marco Tedeschi has been removed as the Department Advocate and has been replaced by Sergeant Christine Mertes. The Department advocate reviews Internal Investigations and makes recommendations to the Chief of Police as to potential discipline for those officers involved.

Let the comments begin.
Posted by KEVIN BROOKMAN at 10:56 AM 114 comments: