THE RIGHT TO BE A MORON 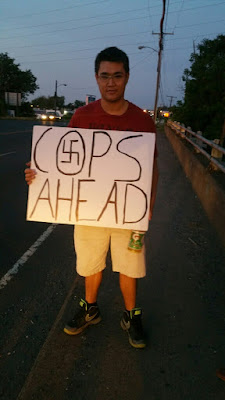 Hartford's latest Moron
Occasionally I think we all need a reminder what a great country we live in. The picture above is your daily reminder for Friday June 19, 2015. This idiot is standing in the roadway on Airport Road to warn approaching  drivers of an HPD checkpoint ahead As someone who has had a relative lost to a drunk driver, actually a wrong way driver on I-91 several years ago, I fully understand the devastation a few drinks behind the wheel can cause.
In the case of my relative, it was a unique situation. I had a cousin who was totally deaf. Karen eventually met the man of her dreams. David was also totally deaf and they got along extremely well. It was always very interesting to watch them communicating through sign language and reading lips and they both seemed very happy and they eventually got married and had two children. David eventually was hored by the Post Office at the Weston Street Post Office. He worked nights in an area that specifically hired hearing impaired people die the nose in the area.

David had left work one night after his shift, headed home to his wife and children. It was David's misfortune to encounter a wrong way driver headed South on I-91 in the Northbound lane. The drunk had recently left a bar in Sprongfiweld and collided with David head on, killing him instantly. As is usually the case , the drunk survived


This moron pictured above, identified through sources as Steven Schafer, apparently appreciates his right to free expression along with his associate Michael Picard who was also holding signs along Airport Road. Expression tha they are both  free to exercise no matter how irresponsible or offensive it is. The swastika is an interesting touch and I am not sure how that strengthens their message. As a moron, he clearly doesn't understand the symbolism that symbol  and the deep hurt and feelings it provokes.

The moron was at a DUI checkpoint earlier this evening on Airport Road in Hartford. The checkpoint was held in conjunction with MADD and several mothers an family members who lost children to drunk drivers were there. I am not sure what Mr. Picard's message is or was. Is he condoning drunks killing children? Is he maybe offering support for the Holocaust and the deaths of Jews.

Whatever the message is, he is wrong and the case of DUI fatalities, dead wrong.

But once again , everyone has the right to be a moron, even Mr. Picard . So Mr. Moron Picard, next time you get the idea to warn drunks on the road, try to remember the story of Karen  and David, and maybe remember all of the Jews killed during the Holocaust.

I also can't help but wonder how your family would react if you were run down and killed by a drunk driver while out there pulling your crazy stunt.
Posted by KEVIN BROOKMAN at 10:17 PM 29 comments: