On Saturday, June 4, 2016 Officers of the Hartford and West Hartford Police Departments and Connecticut State Police engaged in a motor vehicle pursuit that began in Hartford and ended with the arrest of the driver and his passenger in West Hartford. The pursuit began when a Hartford Police Officer determined that the car in question was stolen. When officers attempted to stop the car the driver sped away and led police on a chase through several residential streets in Hartford. When the pursuit reached West Hartford, and after the police deployed “stop sticks,” the stolen car was brought to a halt. In the course of arresting both occupants of the stolen vehicle, officers used force-including the use of a TASER-to affect the arrests. Both arrestees suffered visible facial injuries at some point.

In sensitive incidents related to police use of force it has been our practice to release as much information as possible as soon as it is available. We have already shared information and had community conversation about this incident on several occasions. The Hartford Police Department has previously (10/05/16) released all video evidence related to this incident to our community as well as the media. The Hartford Police Department administrative investigation has now been completed. The 68 page Internal Affairs investigation and findings are attached (The summary begins at the bottom of page 56). We have also attached a document that describes the discipline that was applied to many of the Officers involved.

We take great care to partner and dialogue with our community every day, and we appreciate our community's input and ideas. While this internal administrative investigation is complete, we will continue to share the information we gather and communicate it openly.
Disciplinary Summary - I-File _2016-005 by Kevin Brookman on Scribd


WH Investigation by Kevin Brookman on Scribd
Posted by KEVIN BROOKMAN at 9:35 AM 41 comments:

KEEP HIM IN YOUR THOUGHTS AND PRAYERS

Last Thursday Hartford Firefighter Jimmy NGO was shot several times in Rocky Hill. One shot was apparently to his face and several more were to his back. Ngo survived and underwent a couple surgeries last Friday, and from what I am told, he was very lucky and  is recovering well.

According to sources, a suspect was identified and a warrant was "walked through" the New Britain court on Friday. I am not going to post anymore information about the suspect until he is in custody.

In the meantime please keep Jimmy Ngo and his family, as well as all of our first responders , in your thoughts and pray for a speedy and complete recovery for him
Posted by KEVIN BROOKMAN at 3:28 PM 10 comments:

WHY CAN'T HARTFORD RECRUIT OR MORE ACCURATELY WHY WON'T THEY HIRE POLICE AND FIREFIGHTERS ?

The numbers of Police Officers and fire fighters are decreasing everyday. This is not news. Neither is the fact that both HPD and HFD have warned of the impending crisis as the City fails to get serious about hiring replacements for the attrition of Police Officers and Firefighters. And if my sources are accurate, which they usually are, it is going to get much worse as June and July approach and numerous retirements are expected.

Combine that with the uncertainty created by the Mayor's efforts to balance the City's budget on the backs of employee salaries and pensions, and we have a real recipe for disaster.

It is somewhat interesting that the New York City Police Department can recruit and graduate over 600 Police Officers in one shot, yet Mayor Bronin tells us he can't even find a dozen qualified applicants to enter the HPD Academy as recruits and HFD is finding the same fate. 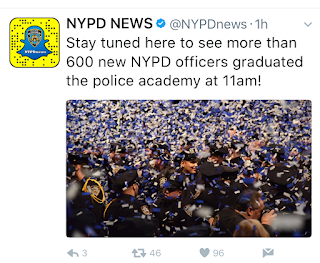 The starting salary for a NYPD Officer is $42,500 while Hartford is slightly higher at about $43,800 but Hartford is still lower than most surrounding towns. Most Police Officer's and Firefighters get into the business because of family tradition or their desire for public service, many of them have already served their communities and their Country through military service. The second leading reason is probably, to be completely honest, the job security and the benefits, including the pensions.

The uncertainty in Hartford over the future of the City finances and the future of those benefits and pensions is a big reason for the attrition, early retirements as well as people just applying to other towns where the future looks brighter. And where the support of Administrators looks more sound than Hartford.

Another major reason for finding qualified applicants is the cumbersome state of Hartford's hiring process. If someone is serious about finding a job and starting a career. they will go to a town where the process takes months, as opposed to a hiring process in Hartford that sometimes (actually most times) drags on for a year or longer So during that delay time, good applicants are going to get grabbed up by other agencies that know how to streamline the process.

Hartford also needs to get serious about recruiting efforts.  If applicants aren't walking in the doors at 253 High Street, then they need to go out and find them. That may involve a little bit of salesmanship at places like career shows, college campuses and military installations. It also should involve people that take pride in their uniform and wear it proudly and take pride in their chosen career. Not "toning it down" by wearing a smurf colored Polo shirt.

Look at the two web links below and decide which one will draw in applicants. NYPD that provides pertinent information or Hartford.gov that says fill out the card and we will get back to you.

And finally, is Mayor Bronin serious about hiring or is he more interested in the budget dollars saved by not hiring. Do the math , failing to hire 100 police officers at $50,000 roughly in annual salary for each is $6,250,000 saved for each year those positions are left unfilled. Add the same number for Fire Fighter unfilled vacancies and that is almost $13,000,000 a year saved. That is $26,000,000 over the time Bronin will be slashing the budget so far. A big help for a precarious budget deficit to save $ 26,000,000 plus roughly another 40%of that amount for fringe benefits

If NYPD can do it, why can't Hartford? Or is it just our inferiority complex we are led to believe exists that is keeping applicants away