DARYL...DO YOU STILL HAVE MY PHONE NUMBER? 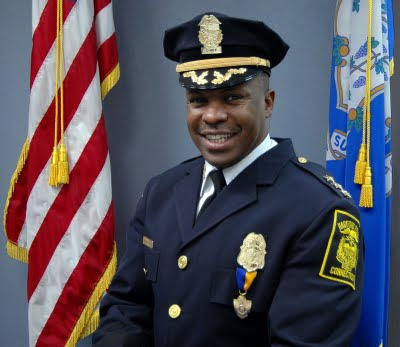 If so Chief, it might be nice to call me before you start running around to community groups bad mouthing me.

I had thought you were more of a professional than that and if you would like a rematch, I'll be more than happy to put my facts and documents up against your denials any day, any time, in front of any group, just name the time and place. And if you honestly think that your problems coming to light now are only because you disciplined a Lieutenant for dancing on a table and for not promoting a Lieutenant "who looks like you", I think you are headed for a rude awakening.

And your comment to the Greater Hartford African American Alliance that the blog is all about my "ego", I will be the first to say that I am very proud of what this blog has become. The fact that it has also become a mechanism for exposing corruption, ineffeciency and wrongdoing and that many of your own people are willing to provide facts and documents I'm sure is a problem for you. And as far as ego's, I guess you would know what you are talking about.

The truth will eventually come out and the way it sounds with everything going on, it will come out sooner than later. Ask your previous boss Eddie Perez what the denials are worth when the truth actually comes out.

Chief, you and you alone were in a position to change all of the problems now coming to the surface if you had done what you needed to do. We talked over a year ago about the backstabbing by those you consider your confidants and you now are seeing the results of that. Remember when I told you to make sure you wore your vest so it might help when they stabbed you in the back?

If you think your only problems at HPD are a dancing Lieutenant and a Lieutenant that "looks like you", you have truly lost control of your department.

I anxiously await the Rudewicz report.
Posted by KEVIN BROOKMAN at 8:19 PM 26 comments:

The City of Hartford today notified attorneys for the Hartford Police Union and Hartford Police Officer Matthew Secore that are giving up and will finally abide by the rulings in favor of Secore.

Although the Connecticut Labor Board and the Connecticut Superior Court had ruled in Secore's favor, Assistant Corporation Nathalie Feola-Guerrieri instead chose to move forward in her efforts to keep Secore from returning to the ranks of HPD. That decision now promises to cost the City of hartford and its taxpayers several hundred thousand dollars in back pay for Secore and legal costs associated with Feola-Guerrieri's decisions.

Secore appealed his termination and the Labor Board ruled that termination was too severe a punishment and reduced the punishment to a 90 day suspension. The Labor Board cited past practices of HPD in making their decision as well as Secore's honesty and truthfulness throughout the investigation.

Secore's back pay alone should total close to $200,000 not including interest and other benefits. Legal fees are most likely even more than that.

According to the City Attorney's, they are waiting to hear back from Chief McCoy as to whether there is space in the next Police Academy class to fit Secore in. In the meantime the meter is ticking on Secore's settlement.

Chief McKoy was unavailable for comment. At last report he was heading south on I-91 lights and sirens for a hair appointment.

ROLDAN SHUT OUT BY HARTFORD DEMOCRATIC TOWN COMMITTEE, BUT DID IT EVEN MATTER ?

Hartford's 4th District State Representative Kelvin Roldan today ended his exploratory flip flop adventure and announced that he has finally decided what he wants to be when he grows up....Hartford's City Treasurer.

Apparently that decision, or the delay in arriving at it, didn't sit well with the Hartford Democratic Town Committee. Roldan made his announcement just hours before the HDTC was scheduled to interview the announced candidates for Treasurer and Mayor. Roldan did show up at Bulkeley High School loaded with his literature handouts ready to finally jump into the process, but he was not allowed to participate.

According to HDTC Chairperson Jean Holloway, their was a process and a schedule for submitting resumes and being invited for interviews. Roldan chose not to follow the process .

Roldan didn't miss much though since only a handfull of HDTC members even bothered to show up to hear the Treasurer or Mayoral candidates speak. Tonights interviews were even more poorly attended than the Council candidates interviews last night. Wednesday about 25 HDTC members were in and out throughout the night, tonight maybe about a doze n showed up.

It was far from any show of courtesy to the candidates that took the time to show up or even to members of the public that attended. It is a tribute to old-style Hartford politics where it is not about evaluating the candidates and making the best choice. If it was, all 64 HDTC members would have made it a point to be there and do what they were elected to do. Instead it showed that they have either made up their minds without evaluating the possibilities or, worse yet, they just don't care.

With a system as flawed as this one and so loaded with political patronage, it might just make sense to skip the endorsements and let everyone go to a primary and see who survives. It would be interesting to see all of the candidates have to work to gain their offices
Posted by KEVIN BROOKMAN at 1:11 AM 13 comments:

I have decided to use a seperate website for my campaign. The site is still being built, but over the next few days it should be up and running for more information than just the home page that is there now.

Information on my ideas for the City, campaign issues, campaign events and how to make campaign donations will all be there soon. 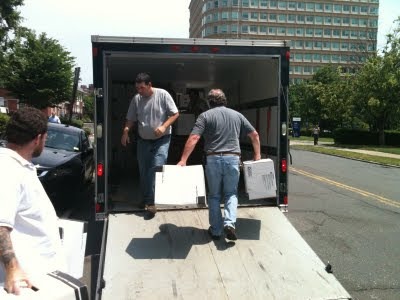 Sometimes it may seem like Hartford has no heart, but I'm sure the people in tornado stricken Monson,Massachusetts have a different impression.

Unfortunately things like this don't make the "main stream" news cycles, I guess it doesn't rise to the level of sensationalism that a murder or shooting does.

Almost two weeks ago, Hartford Police Officer Mike Allen called me and asked for some help to get the word out that cardboard boxes were desperately needed for his neighbors in Monson Massachusetts whose homes had been destroyed or damaged by the tornadoes that swept through Massachusetts. I quickly agreed and then approached the next hurdle. Where could the boxes be collected?

Many people came forward to make it happen, state employees brought boxes to work, residents and business people dropped boxes off, my mother went around her neighborhood collecting boxes and law firms like Halloran and Halloran cleaned out their store rooms of folded file boxes. thank you to all of you

Although the "box drive" was only scheduled to go through last Friday, the boxes are still coming in. As of today, two 30 foot trailers have been filled with boxes and been delivered to Monson Massachusetts by Officer Allen. It is expected that there will be enough boxes to fill another 30 foot trailer full by the end of the week.

A few special thanks, first to Officer Allen for coming forward and being a good neighbor to his less fortunate neighbors in Monson, Mass. A very special thanks to Governor Malloy and his staff, including Shirley Surgeon, Chief of Staff Timothy Bannon, Commissioner of DPW Jonathan Holmes the building superintendents from the State office Building who facilitated the collection and the loading of the trailers and to all of their staff that helped and to Hartford DPW Director Kevin Burnham.

This is the common sense, no nonsense approach that can get things done and all of those that I mentioned above got this done in record time.
Posted by KEVIN BROOKMAN at 1:58 PM 1 comment:

MY CAMPAIGN FOR HARTFORD CITY COUNCIL

I have been going back and forth on whether I should set up a separate website to post information regarding my campaign for Hartford City Council. The one thing I did decide though was that I was not going to make it part of the regular posting on the main page of the blog.

I think many of my readers are interested in the future of Hartford and the direction it is going, but I don't think everyone wants to read about me and why I'm running. If you are a regular reader you already know my position on a lot of things affecting Hartford.

Let me know what you think.
Posted by KEVIN BROOKMAN at 11:30 AM 23 comments: