DIRTY HARTFORD POLITICS ARE ABOUT TO GET DIRTIER

When do we  as voters in the City of Hartford say enough is enough. The Hartford Democratic Town Committee is quite possibly one of the most corrupt organizations anyone can find currently in existence. Even the Gambino Crime family now pales in comparison to the Hartford DTC.

Now allegations are being thrown about regarding possible forged signatures on petitions submitted by one of the challenge slates. The process for gaining a seat on the Hartford DTC lends itself to corruption. I still haven't been able to see what many see as the "power" of being a DTC member, or why members want to maintain a stranglehold on the DTC  positions. It is not because members think they will be recognized as making their neighborhoods a better place, most people have no idea who is even on the DTC until they come knocking on their doors looking for signatures to qualify every two years.

Name 5 residents in your voting District who have made your neighborhoods a better place by serving on the Hartford DTC and I'll be amazed if you can name even 2. You might be able to name a few who have taken care of themselves and their families with jobs or contracts though if you have been paying attention .

Now some might call it comical, others might say hypocritical, but lets get back to the lawsuit being filed. I got a couple phone calls regarding the basics of the lawsuit. I went on the the State's Judicial website looking for the lawsuit.  I couldn't find any at first, so I tried to search under the name of the attorney filing the lawsuit, Hartford Attorney John Kennelly . Kennelly has also been a member of the First District Town Committee and is the "go to guy" for any legal action required when the DiBella Aristocracy is threatened with legal action to endanger their stranglehold on the Hartford Democratic Town Committee.

Imagine my surprise when I did my search on the State's website for Kennelly's "Juris number" . A Juris number is similar to the license number issued after an attorney is licensed in Connecticut. Kennelly's Juris number came up and showed that he was just coming off a 90 day suspension of his law license, reduced to a 30 day suspension. The suspension was for misuse  and inappropriate handling of client funds.

The 01-0769 Case number referred to an allegation that Kennelly lied to a Superior Court Judge regarding funds available for a settlement to a client.

You can read these cases for yourself by following the link and entering Kennelly's Juris, 413252 Numberhttp://www.jud.ct.gov/attorneyfirminquiry/JurisDetail.aspx

The filing of the lawsuit has several flaws on its own, including the "spokesperson" or the Chairperson of the incumbent 6th District Democratic Town Committee being omitted from the following. Kate Kowalshyn is listed on the Registrar of Voters paperwork as a candidate, but she is not listed on Kennelly's lawsuit. (Maybe Kowalshyn is smart enough to stay above the fray , and may the best slate win)

Now if in fact it is proven that signatures were forged or improperly obtained, then those signatures should be disqualified and removed from the count, but to attempt to have all of the petitions thrown out without any proof that they were not qualified voters  frankly stinks, and it disenfranchises legitimate voters who signed the petitions.

And if it is proven that any forgery  or malfeasance existed, the culprit should be dealt with properly, both civilly and criminally where possible. The integrity of our voting system needs to be taken seriously, and a good start would be knowing that attorney's with integrity are dealing with the problem

HARTFORD IS A LAWLESS CITY

According to numbers provided to me, Hartford ended 2017 with an almost 160% increase in homicides last year (That number is not confirmed 100% because the HPD website hasn't been updated with accurate numbers since the beginning of November. No year end numbers have been posted yet, even though we are 3 months into 2018)

The police presence is no where near where it should be, but with that being said , another statistic bothers me much more than the homicide rate.  In roughly the first month of 2018, Hartford has experienced 7 fatal motor vehicle accidents. That number is compared to 9 fatal accidents for all of 2017. I fear being a victim every time I leave my driveway, and not a victim of a homicide as much as a crazy lawless driver on our streets .

There is very little traffic enforcement on the streets of our City. HPD officers are sometimes backed up for hours answering calls and have very little unallocated time to stop these crazy drivers and issue tickets.

The Hartford Police Traffic Division has been doing a commendable job under the recent direction of LT. Gabe Laureano ,but the number of officers assigned to his division have been steadily depleted, to just a handful of officers now. And those handful of officers are also responsible for maintaining traffic order and control at all Uconn games, hockey games and events at the XL center as well as concerts and events at the Xfinity Theater. Add to that the fact that CRDA, the Connecticut Redevelopment Authority is delinquent in paying their bills to the City of Hartford for Police Services  to the tune if almost a $ 1 million dollars

That delinquency was first uncovered here by "We the People"  http://wethepeoplehartford.blogspot.com/2017/12/hartford-auditors-xl-center-owes-hpd.html

It is time for HPD and the City of Hartford to collect the dead beat funds from CRDA and put some of that money into increased traffic enforcement on our streets to send a message and an effort to reduce these  traffic deaths and protect from more innocent victims and deaths.

Many of the cars on Hartford's streets are what HPD officers call "Hartford Specials". These are cars that are typically unregistered and uninsured and in many cases the operators have no insurance and their drivers license may very well be suspended or revoked. Your possibility of recovering any loss if you are struck by one of these Hartford Specials is pretty slim , that goes for both vehicle damage or insurance for any injuries you may incur.

With our new Police Chief, David Rosado having just retired as the Lt. Colonel of the Connecticut State Police, there might nor be anyone better suited at HPD to champion the cause of increased traffic enforcement. And maybe if HPD is not equipped to assign additional officers to the Traffic Division due to the Mayor's failure to hire sufficient officers,  it might be time to request some stepped up enforcement from the CSP Traffic Division as well as DMV inspectors to send a message that innocent driving deaths are not acceptable in Hartford.

Otherwise, if we keep on track, anticipate a 1000% increase in traffic deaths on our streets for 2018. I am much more concerned by that stat than I am in a 160% increase in homicides, although neither should be acceptable to us.
Posted by KEVIN BROOKMAN at 8:36 PM 29 comments:

FROM HPD: ARREST MADE IN DOUBLE FATAL HIT AND RUN 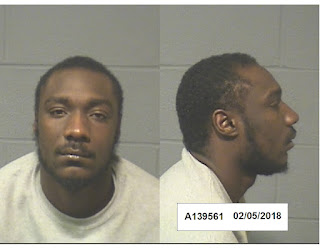 On Tuesday, January 16, 2018, at approximately 9:53pm, Hartford Police Patrol Officers were dispatched to 95 Vine St. on a report of pedestrians struck by a motor vehicle. Responding HPD officers located two female victims suffering from serious injuries at the scene. The victims were transported by ambulance to Saint Francis Hospital for treatment. The 24 year old female victim, Tina Fontanez, succumbed to her injuries at approximately 10:19pm. The second victim 23 years old, Catalina Melendez, was listed in critical condition. Unfortunately her injuries were not survivable. On January 23, 2018 at 6pm she was pronounced deceased at St. Francis Hospital.

Responding officers located an unoccupied motor vehicle (2006 Acura TSX color silver) near the crash scene (intersection of Bethel and Guilford) with damage and evidence consistent and with having been involved in the crash. The vehicle was secured and seized as evidence. Additional physical evidence was located on-scene. Detectives from the Crime Scene Division and Major Crimes Division responded to the scene and assumed control of the investigation. C4 analysts have assisted with video evidence.

Investigative Findings:
The suspect vehicle was traveling north on Vine Street. The two pedestrians, who had just exited a cab, were in the travel lanes of Vine St when they were struck. The vehicle fled the scene and was recovered near the intersection of Bethel St. and Guilford St.
A short time later, the registered owner of the vehicle, Lorenzo Ivery DOB 7/14/92, of 135 Dart Street, Hartford, CT, reported the vehicle stolen to police. Based on physical evidence and video surveillance, Detectives were able to determine that Ivery was an occupant, but not the driver of the evading vehicle (including showing up at HPD with auto glass in his hair and clothing). He was subsequently charged with Evading Responsibility with Death, 14-224(a), Evading Responsibility, 14-224, False Statement, 53a-157, Hindering Prosecution 2nd, 53a-166 and Owner Liability, 14-107

Investigation of the incident continued, which included analysis of video footage obtained by the Hartford Police Department Capital City Command Center (C4). Detectives were able to develop a suspect operator of the vehicle during their investigation. The suspect, Nathaniel Jefferson, DOB 10/08/1993, was located and interviewed by Crime Scene Division Detectives. During the interview, Jefferson admitted to being the operator of the vehicle at the time that it struck Ms. Fontanez and Ms. Melendez. Jefferson also admitted to leaving the scene of the crash.

The HPD Crime Scene Division continued investigating the crash and applied for an arrest warrant for Jefferson. On  Friday, January 26, 2018, an arrest warrant was issued for Nathaniel Jefferson related to his role in the crash that took the lives of Ms. Fontanez and Ms. Melendez.

On Monday, February 5, 2018, Jefferson turned himself in to Hartford Police Officers at the Public Safety Complex and was charged with two counts of Manslaughter 2nd, 53a-56, two counts of Evading Responsibility with Death, 14-224(a), Evading Responsibility, 14-224, Reckless Driving, 14-222(a), Traveling Too Fast for Conditions, 14-218a, Failure to Drive in Proper Lane, 14-236(1), and Operating w/Suspended License, 14-215a. Jefferson was processed by the Detention Division and is being held on a one million dollar judge-set bond.