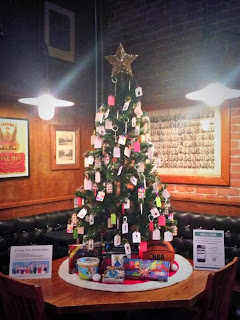 Find out more about the Giving Tree here

Posted by KEVIN BROOKMAN at 10:32 PM No comments: 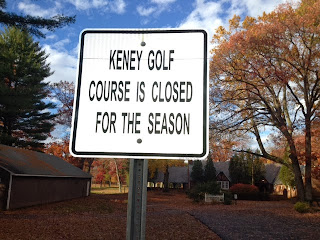 Sources familiar with Hartford's Golf Course Task Force have confirmed for me that Keney Park Golf Course has been closed and will remain closed until at least April 2015. The source stated that the decision was made due to the "deplorable" conditions of the course,
Apparently it will take at least a year to get the course back in playable condition after the neglect under MDM Golf, the course manager contracted by the City.
I have not been able to find a record of any legal action being initiated by the City of Hartford Corporation Counsel to recover any losses or any legal action against  MDM to protect the interests of the taxpayers of Hartford.
The source also stated that the rehabilitation process has begun as both Hartford DPW workers and Knox Parks have been working on the grounds aerating fairways and greens and applying fertilizer before the winter sets in. 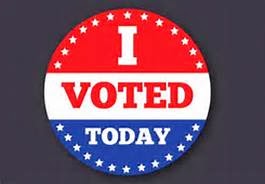 Not many of those stickers were handed out in Hartford yesterday
The official results for yesterdays election are in, including the ballot question numbers. The turnout was terrible and was probably less than 5% for the entire City. One of the troubling things though has to be a question regarding the accuracy of the numbers, I find it very hard to believe that not one person voted in Hartford Voting District number one, not one, that just seems impossible.

District one , according to my list , is at the Liberty Christian Center at 23 Vine Street. I recall in years past that is normally a pretty busy polling place. If that is true, it definitely shows that Hartford's overall number of polling places should be cut to a more realistic number. It just seems crazy to be staffing polling locations if no one shows up.

IT IS NOT JUST STF

Hartford's Shooting Task has done a great job taking illegal guns off  ofHartford's Streets but there are still may other officers doing a great job day in and day out. Two of the unsung hero's happen to be Community Service Officer's in Hartford's South End. Officer's Teddy Sposito and Carlo Faienza  are two officers that epitomize community policing.
Sposito and Faienza are two officers that have built solid relationships with the Community and the business people in the areas they are assigned to  and those relationships have shown big results.
The information below is one example
.FROM HPD;
On the listed date and time, Officer Faienza and Officer Sposito attempted to conduct a motor vehicle stop of an unregistered Oldsmobile Alero color white bearing CT registration 531XSF, in the area of 130 Preston Street. As Officer Faienza exited his marked cruiser, the operator of the Oldsmobile sped off.
Officer Faienza radioed to dispatch that he had a vehicle fleeing and refusing to pull over as he gave the suspect vehicle's location. Officer Sposito advised dispatch that the suspect vehicle blew out a rear tire while striking a curb and was traveling on three tires. The pursuit was terminated by a supervisor as the fleeing vehicle continued south on Fairfield Avenue towards the town Wethersfield
.
Officer Sposito advised dispatch the vehicle was smoking heavily, traveling on three tires, last seen on the Berlin Turnpike in the area of Jordan Lane. Dispatch immediately notified the Wethersfield Police Department via the hotline.
Officer Lawless of the Wethersfield Police observed the vehicle traveling south on the Berlin Turnpike in the area of Nott Street. Officer Lawless followed the vehicle south on the Berlin Turnpike from a distance. Captain DePinto was traveling north on the Berlin Turnpike at Prospect Street in Newington and observed the fleeing vehicle go off the road and crash at 2303 Berlin Turnpike.
The operator of the vehicle, Jeremy Kelly, fled on foot as Captain DePinto maintained a visual. Captain DePinto directed Officer Lawless as he arrived on scene and immediately apprehended accused Kelly. In accused Kelly's pant pocket was a loaded Beretta 9mm magazine. Kelly immediately admitted to Officer Lawless that a gun was in the vehicle.
Further located on Kelly's person was one ounce of crack cocaine and $593.00 in U.S. currency.
Located in the vehicle on the drivers side floor was a loaded 9mm Beretta handgun (serial # BER266439Z) with a magazine and a chambered round . Two magazines and twenty-two (22) rounds of live 9mm ammunition was seized.
Officer Faienza and Officer Sposito were directed to the scene by Lt. Allan. Officer's Faienza and Sposito arrived and assumed the investigation with assistance from the STF who also responded. Officer's Faienza and Sposito arrested accused Kelly and seized all related evidence. Kelly was transported to the STF for de-briefing.
Great job by Officer's Faienza, Sposito, Lawless and Captain DePinto!
Accused; Jeremy L. Kelly, M/B/27 (09/09/1986), of 19 Summer Street Apt 1, New London CT.
Charges; Operating Unregistered M/V, Illegal Tints, Operating M/V w/o Insurance, Operating Under
Suspension, Engaging Pursuit, Interfering w/ Police, Possession Narcotics, PWITS Narcotics, PWITS > 1oz Crack Cocaine, Weapon in M/V, Carrying a Pistol w/o a Permit and Criminal Possession of a Firearm. 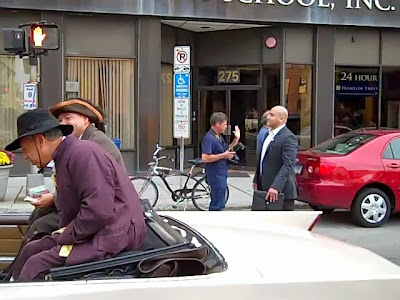 Mayor Segarra in the Hooker Day Parade, followed by his "scheduler" Jalmar DeDios walking alongside


Apparently now it is not just enough to invite the Mayor to a Community meeting, now you have to explain "Why" as well as prepare talking points for the Mayor. I think the answer to the question "Why?" should be because we elected him, we pay his salary and he answers to us.

I am not sure what goes through this Mayor's mind, he has insulated himself with a Secret Service style detail and even travels with his detail on out of state trips. This is not the same person that many were hoping would turn this City around after his divisive and felonious predecessor was forced out of office.

Now a form has to be completed to invite him to meetings and events. I honestly think Pedro has lost sight of who he represents and why he is there. This is a small City yet Segarra thinks he is on the level of our Governor or greater . As I write this, I am told Segarra is in Chicago, travelling once again for the same organization that sent him to Puerto Rico recently.

We need a leader for this City who is in touch with his constituents.  A Mayor that understands the difficulties his residents face day in and day out, and is in his City fighting for change to attain a better quality of life for his residents.

Put down the caviar spoon and get out and talk to the people in this City that are struggling to make ends meet. In the meantime Pedro, you don't need a screener before you visit in the community, get out there and listen to the honest truth.

According to the City Charter the Mayor may appoint a Chief of Staff, legislative assistant, research assistant personal secretary and receptionist or equivalent positions for which the Council may appropriate  sufficient funds. I don't recall any request to the Council recently for the new position of scheduler. But then again, when has the Charter mattered

IT WILL BE INTERESTING TO SEE HOW THIS GOES 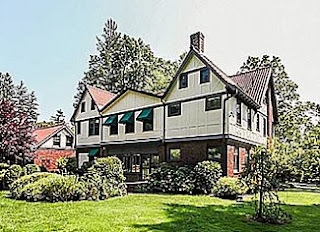 The latest UCONN Party House
Last month I posted about an effort by some, including Mayor Segarra's partner, Charlie Ortiz, who were attempting to shut down a food pantry at a West-end church on Prospect Avenue. The main objections seemed to be that the operation brought increased traffic to the neighborhood and that the operation was possibly perceived as a misuse of the property in violation of local zoning laws.

Ortiz and members of the West End Civic Association had apparently held meetings with City Officials in their attempt to shut the operation down. You can read more on that here 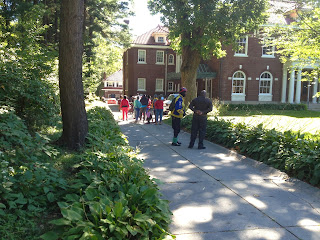 
Now it seems that less than three blocks east of the food pantry another zoning violation as well as increased traffic may be taking shape. The word came out yesterday that the UConn Foundation has just purchased a party house for UConn President Susan Herbst on Scarborough Street. According to news accounts, the primary function of the mansion listed at $660,000 would be for fundraising events and cocktail parties at the house  in one of Hartford's most affluent neighborhoods.

The secondary use would apparently be as a part-time residence for President Herbst who may use the house half a dozen times a month when she is in Hartford.

Scarborough Street is far less equipped to handle parking and traffic than Prospect Street is, but only time will tell if there is a push to enforce zoning regulations on Scarborough Street the same as there was on Prospect.
Posted by KEVIN BROOKMAN at 5:32 PM 3 comments:

DAN NOLAN IS AT IT AGAIN

When it comes to fundraising and compassion for charitable causes, Dan Nolan is the go to guy.  I think he has been involved in raising funds and awareness for just about every charitable event known in Hartford. Nolan is able to juggle his time between his position as Deputy Chief of Training for the Hartford Fire Department and his military commitments, having served in Iraq and Afghanistan.

Dan recently contacted me for assistance in getting the word out for his latest charitable act. As someone who has a nephew that lives with Cerebral Palsy, I can definitely appreciate this cause and the challenges faced by the parents of children with CP. The flyer below speaks for itself and if you are interested in making a donation , the information is in the flyer.

Posted by KEVIN BROOKMAN at 4:59 PM No comments:

An Internal Memo issued today by Hartford city Auditors painted a picture of very lax or nonexistent adherence to City Policy in the release of over $800,000 to the Hybrid Insurance Group. The wire transfer has most likely become the subject of a Federal Grand Jury Investigation.

In the memo, Internal Auditor Craig Trujillo states that  numerous policies were either mot followed or were totally ignored. The memo, posted below, speaks for itself, but it seems to show that City Hall is a free for all with no regard to policy or using sound business principles for the operation of city government