ALL ABOARD THE GREY GRANITE RAILROAD 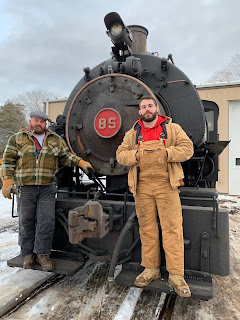 Time for a Big Mack at the Farm

Is that the James Brothers before their next train hesist?

No, it is actually the The Cavanna Brothers, John (L) and Andy (R), and the Cavanna Family of South Glastonbury .

They are are at it once again with the unveiling of the Grey Granite Railroad and their latest acquisition,
with  the arrival of “Mack”, a 1928 Vulcan Iron Works steam locomotive. Mack is a 0-4-0 wheel arrangement tank engine that is fired by coal. Mack carries 1,500 gallons of water in his saddle tank, weighs 82,000 pounds, is 13 feet tall, and is 28 feet long. The engine was built in 1928 at Vulcan Iron Works in Wilkes Barre, Pennsylvania. The engine was then purchased by the Jeddo Coal Company, where it worked until it was retired in the early 50’s. Mack was later purchased by Gramling Locomotive Works, and underwent restoration from 2011 to 2017.
Mack will be under steam and running on Saturday, December 7th and Sunday, December 8th. We will run on the 1,400 foot main section of rail laid at the Gray Granite Railroad located at Cavanna’s Farm: 80 Woodland Street, South Glastonbury, CT 06073.
We will be offering cab rides in “Mack” for 35 dollars. (Honestly, where else on earth can you ride in the cab of a working steam locomotive?) We may also offer the opportunity to run the engine from the engineer’s seat! Work boots, gloves and hearing protection are encouraged! And, if you’re riding, prepare to shovel coal!
The railroad will be open from 9 am into the evening. We will also have our Plymouth 35-ton locomotive on static display for kids to climb in, along with farm honey and “GGRR” apparel for sale. The farm will be open for Christmas trees, as well, and the crop is fantastic this year!
If anybody has questions, please reach out to John Cavanna at 860-398-8929.

Stop by and check out their great selection of fresh grown, live, cut your own Christmas trees and experience the beauty of winter on a family owned farm that has been in the Cavanna family since 1903, raising several varieties of apples in their orchards, strwberries, maple syrup and of course Christmas trees. 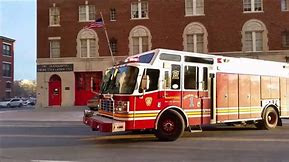 No one can dispute that the Hartford Fire Department is rich in tradition. HFD has been part of many things that have resulted in huge changes to fire codes and regulations and the history of HFD.

The circus fire where many died, the fatal Hartford Hospital , the Greenwoods Nursing Home fire all resulted in changes to the way the City of Hartford as well as fire departments nationwide approach firefighting.

I think that is why the phone calls ramped up last night after word started getting out about the imminent closing of the Pearl Street firehouse. Although "firehouse" may be too general of a term.

I think most people think of a firehouse as that building down the street from their homes where that first fire engine responds from in case of a fire. The reality is that basic firefighting equipment is not housed at the Pearl Street firehouse for years. The only equipment garaged at Pearl Street is Tac 1, the heavy rescue truck, which responds to most incidents in  the City including accidents and structure fires. A district Chief or Tour Commander is also garaged at the Pearl Street building.

So to answer the questions , or fears, of downtown residents, there should be no delay or danger of longer response times to fires downtown . Currently, the closest responding fire apparatus for fires downtown will still be Engine ! from the South Green firehouse on Main Street or Engine 2 from the Main Street firehouse near Albany and Belden.

Hartford Fire Chief Reggie Freeman has been very transparent for several years with his plans to shutter the Pearl Street firehouse. Freeman has also been very open regarding the "deplorable" conditions of Hartford's Firehouses. Those conditions include rodent infestations, code violations, structural deficiencies as well as lacking gender specific locker and shower area and sleeping areas for both male and female firefighters.

The Pearl Street firehouse pretty much fits into all of those deficiencies above, and the construction of the Public Safety Complex a few years ago moved Hartford Fire Administration Offices out of the Pearl Street HQ and into a much more modern structure at 253 High Street. For some odd reason, there were no plans included in 253 High to accommodate fire apparatus and alleviate the money pit at Pearl Street. HFD dispatchers were housed for many years at Pearl Street, but they were moved into the 911 Dispatch Center many years ago.

The time has come to shut down the "garage" that houses Tac 1 on Pearl Street and use the money wasted in the upkeep and operation of thousands of  square footage  and should be put into repairing the deplorable conditions of Hartford's firehouses where out first responders live ,work and sleep everyday of the week.
Posted by KEVIN BROOKMAN at 11:36 AM 52 comments:

IS THIS THE BEST WE CAN DO ? 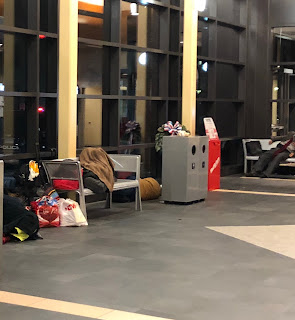 The newest resident at 253 High Street, in the HPD lobby

I think we have become pretty immune to the political rhetoric that spews from Hartford City Hall and the lips of "our" politicians. They all want to talk about homelessness and how they need more money to correct the problem, some of them even make good money for their organizations by benefiting off the homeless problem.

According to sources, a homeless female has taken up residence in the lobby of the Hartford Police Department for the last couple weeks.

She has apparently moved in with several pieces of luggage and has pizza delivered for her meals.

We need to do better than this. Now I know, that some homeless people don't want to accept any help, but the lobby of a public building is not an acceptable alternative , especially when we have so many buildings sitting empty that could be used.

As an example , the Hartford YMCA still sits empty to this day after we fell for a grand proposal for the property that never happened.

There needs to be an effort for  more dignity for all of our citizens.
Posted by KEVIN BROOKMAN at 3:50 PM 30 comments: