A CHALLENGE TO MY READERS

It seems that Chief Roberts didn't lose my number after all. He called yesterday and we had a long talk about various issues. It was a decent and respectful conversation. I know the sport of late has been pointing out problems at HPD and I know that much of that will eventually be documented as the independent report is completed and filed. As a sidenote, I hope the City of Hartford and Mayor Segarra really try to understand the meaning of transparency and don't play games with the release of the final report. Any attempt to avoid the release will only add to the mistrust of government and undermine the community's trust in HPD and its officers (not to mention potentially political suicide for anyone facing an election).

Let's put the personalities aside and come up with some ideas to benefit Hartford and its neighborhoods. We all know many of the key players at HPD can, and probably will, change in the near future. The residents and business people who have made a committment to Hartford will not readily change. That is where we need to be thinking. Not about who's collecting the salaries at HPD, but who is trying to make change and do the right thing.

Most of you are well aware that the Chief, Mayor Segarra and most of City Hall and HPD read the blog. So if you have an idea or suggestion, I am asking you to post it here, but please make it a positive comment that can actually be used to better our City. Now that most of the mistakes have been pointed out, lets move forward and try to make something happen.

Let me know how creative we can be as a City. Thanks.
Posted by KEVIN BROOKMAN at 8:14 PM 37 comments:

WHAT ARE OUR PRIORITIES?

Sometimes I just have to wonder what our priorities are as a community. I don't mean to minimize this incident because I value our trees and landscape as much as anyone else. The peeling of the bark from the cedar tree in Elizabeth Park was and is a senseless act of vandalism. The tree is not something that can be easily replaced, most likely it can't be replaced, and it has to raise the issue of what the people who did it really value or care about.

For several days now it has been in the media cycle, the names scratched in the tree are being publicized and broadcast in the hopes that the vandals will be identified. Thye television cameras and reporters have been all over this story.

Yet, Hartford is at 17 homicides for the year , we know those victims can never be replaced. There is no outcry except for maybe a couple ministers and the all too frequent vigils taking place on the street corners where they were murdered.

What does it say about our priorities when a 100 year old cedar tree receives more attention than a 74 year old innocent bystander shot in the chest and murdered on a Hartford street corner? How is it that all of a sudden numerous municipal and State resources can rally to save a tree, but it seems like no one is rallying to save Hartford's youth from the out of control gun violence.

Maybe I'm too cynical, but it just seems like our priorities are way out of whack.
Posted by KEVIN BROOKMAN at 7:56 PM 9 comments:

ANYONE NOTICE THE NUMBERS?

"We the People" has passed the 325,000 mark on the hit counter, thanks for your support.

And thanks to a regular reader who prepared the new photo for the header, it looks great.
Posted by KEVIN BROOKMAN at 7:37 PM No comments:

GOOD THINGS HAPPENING THAT WE DON'T ALWAYS HEAR ABOUT

The bad things that happen always make the rounds quickly, but the good things many times go unnoticed. Last night was one such event.

The Hartford Community Center hosted a neighborhood get-together last night at the Niles Street Coomunity Garden. The event was well attended by many members of the community and a few Council candidates also. The grills were going and everyone seemed to be enjoying the beautiful weather. 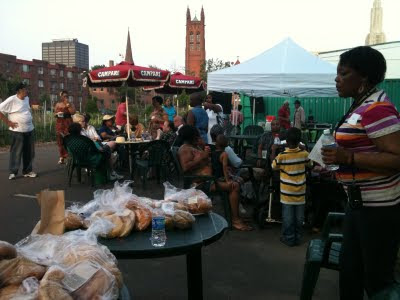 The highlught was the "ABC Drillteam". The team is apparently the creation of the Hartford Community Center and is a program that has, by the looks of it. quite a few of Hartford's young people involved. Their performance was impressive as the drillteam pulled off thier moves to the beats of several young men and the pounding rhythms of their marching band drums and cymbals. 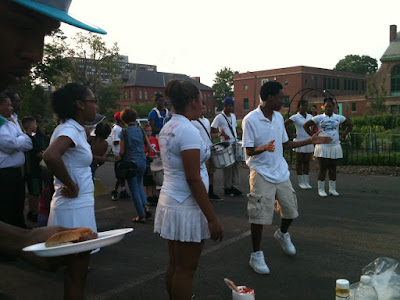 THE ABC DRILLTEAM PICTURED ABOVE

It was good seeing both the youth involved and the adults coaching them taking pride in their performance. The crowd seemed pretty impressed with the performance also.

It just goes to show that there are some good programs guiding our youth and taking them in the right direction.

Congratulations to the Hartford Community Center for building neighborhood relationships and making a difference in the community, we need more of this.
Posted by KEVIN BROOKMAN at 7:33 PM No comments: