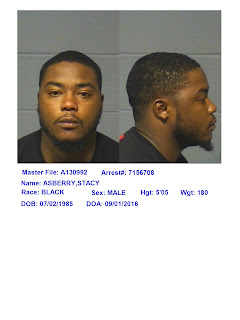 On July 9, 2016, at 6:13pm, Hartford Police Department patrol officers and members of the Hartford Shooting Task Force responded to the Blue Five Corners convenience store, located at 214 Westland Street, in response to a shooting. Upon arrival it was determined that a shooting had occurred in the parking lot outside. The Detectives were able to view and retrieve video surveillance footage of the incident. Furthermore shell casings were also recovered from the parking lot. The video footage depicts a shooting suspect, later identified as Stacy Asberry, in an exchange of gunfire with a 2nd suspect (not yet charged).

The Detectives began further investigating the incident including witness interviews, extensive video analysis, and social media research. This resulted in Stacy Asberry becoming positively identified as the one of the two shooters.

On September 1, 2016 an arrest warrant was submitted to G.A. 14, charging Stacy Asberry with Criminal Attempt Assault 1st Degree, Unlawful Discharge of a Firearm, Carrying a Pistol w/out a Permit, Weapons in a Motor Vehicle, and Reckless Endangerment 1st Degree. The arrest warrant was approved on the same date with a $200,000 cash /surety bond.

On the evening of September 1 , 2016 Asberry agreed to meet with Detectives at 50 Jennings Road and was taken into custody without incident. A debrief interview was conducted of Asberry who refused to cooperate or provide a statement, he was then transported to the PSC for booking and processing procedures. Asberry has 5 previous Hartford arrests.

During the investigative process it was determined that Asberry is currently employed by the City of Hartford as a Department of Public Works employee. As of today, Asberry is on unauthorized, unpaid leave. His status and this incident will be reviewed by the DPW through the proper administrative processes next week.
Posted by KEVIN BROOKMAN at 3:07 PM 46 comments:

ANOTHER KICK IN THE TEETH FOR HARTFORD CITY HALL

"The City of Hartford has signed a legal agreement to provide relocation assistance to tenants displaced by its code enforcement activity. The agreement is the result of a contempt action filed by Greater Hartford Legal Aid, Inc. (GHLA), which charged that the City was not fulfilling its responsibilities under state law and a previous class action settlement reached 30 years ago.


Under the agreement, tenants who are ordered by the City to leave their apartments due to unfit conditions will receive a notice from the City of their right to apply for relocation assistance under the Connecticut Uniform Relocation Assistance Act. The assistance may include help finding replacement housing, reasonable moving expenses, temporary housing, and some rental assistance to secure a comparable new apartment. The City has agreed to accept retroactive applications from tenants who have been displaced by City code enforcement activities since April 10, 2012. Tenants who have been ordered to leave their apartments as a result of City of Hartford code enforcement activities should contact the City of Hartford Department of Health and Human Services, at (860) 757-4700.

GHLA attorneys Thamar Esperance, David A. Pels, and Cecil J. Thomas represent the class of affected tenants. Tenants’ attorney Cecil J. Thomas said, "We are pleased that tenants who are ordered by the City to leave their apartments will now get the help they need during a stressful and disruptive time in their lives."

Several hundred Hartford families are displaced by the City’s code enforcement activities every year. Landlords are responsible for reimbursing the City for relocation expenditures paid to tenants ordered to leave the landlords’ unfit building. Under the terms of the agreement, GHLA and the City of

Hartford will continue to work together to develop policies and procedures that will ensure the provision of relocation assistance to displaced tenants in accordance with state law.
The parties will return to court on April 7, 2014 so that a judge can decide two remaining issues in the case: whether the City must pay tenants who were not offered relocation assistance the value of their lost and damaged property; and what reports are required to ensure compliance with the Relocation Assistance Act. The case is called Serrano v. Gaitor. "

The Ebony Horsewomen had promised the City of Hartford and its residents a major event to take place in Keney Park in a couple weeks. They had promised it to be a huge economic benefit to the City.

Now according to the Ebony Horsewomen's Facebook page, the Connecticut Classic Horse Show has gone the way of Riverfest.

Is this becoming a Hartford tradition to cancel events two weeks before the event?

It is unclear at this point what City resources and if any city dollars had been put into the event yet.

Maybe next year.
Posted by KEVIN BROOKMAN at 4:02 PM 13 comments: