ONE, TWO, THREE STRIKES YOU'RE OUT 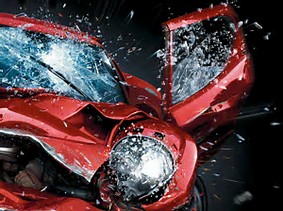 A Minor accident became a serious incident Wednesday, details below

On Wednesday morning , the Hartford Police Dispatch Center received a call for a minor motor vehicle accident in front of 26 Wethersfield Avenue. It eventually turned out to be anything but a minor incident and resulted in the arrest of a Hartford woman on numerous charges.

According to police , two vehicles were headed north on Wethersfield Avenue near Wyllys Street. One vehicle was driving properly in its designated lane. The second vehicle operated by Amber Williams, 29, of Shultas Place in Hartford, was apparently improperly travelling northbound in the left turn lane to bypass traffic. According to witnesses , Police, and video recordings, Williams quickly veered over to continue northbound in the travel lane, striking vehicle number one in the front end when she cut him off.

Well it quickly took a turn for the bad when Williams exited her vehicle and approached the vehicle she had just cut off and struck. A verbal altercation ensued, at which point, according to Police and witnesses ( and the video), Williams returned to her vehicle and retrieved a baseball bat and proceeded to strike the vehicle she cut off, hitting the grill and front end area of the car.

The operator of the vehicle she was hitting with the bat , apparently then yelled to his wife "Get the gun ready".

The operator apparently felt as though he was being threatened by an erratic woman swinging a bat and hitting his car.. Williams apparently told the operator that "she was not afraid of him" and could  "handle her own". As it turns out, the operator's wife did have a gun in her possession, a 357 Magnum and she was licensed to carry it and that was confirmed by HPD. The use of deadly force most likely would have been justified if there was any attempt to turn the bat on the operator or his wife or child. Fortunately, Williams only struck the vehicle and not the operator , his wife, or their child in the car and didn't physically threaten them aside from swinging at the car

Before Police actually arrived, concerned citizens observed the commotion and intervened to diffuse the situation.

The arriving officer asked Williams what had happened and reportedly she began to yell "he hit my car , he hit my car", even though the facts showed that she caused the accident. The officer then tried to get Williams to calm down , but that didn't work. The officer tried to explain to Williams that it was "just an accident". Williams reportedly yelled at the officer "I see how you do, you are already judging me". according to the HPD incident report, Williams then called the Officer a "racist". The Officer walked away from Williams and requested a Supervisor.

A Supervisor responded, Sgt. Eric Smith. When  Sgt.Smith attempted to talk to Williams, again according to the incident report, Williams walked away and said Smith was too intimidating and then stated to HPD Officer Cunningham that  " that Officer is the type of Officer that kills black People". Not that it has any bearing, but Sgt Smith is an African American Officer with over 20 years on the Department.

The sequence of events as reported was also verified by numerous witnesses as well as video recorded by HPD's Crime Center cameras which cover that area and showed Williams acting erratically and aggressively.

Williams was arrested for the incident and charged with Breach of Peace, Reckless Endangerment and Interfering With Police.

Luckily HPD handled the incident quickly and professionally, and avoided an incident that could have turned out much worse. 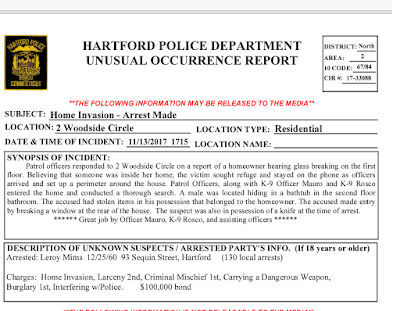 A home invasion in Hartford yesterday could have turned out much worse if not for a well prepared and calm thinking homeowner and a great response by the Hartford Police Department.

The details are outlined in the unusual Occurrence Report above.

Aside from the details of the crime, one of the most troubling aspects is that the criminal has over 130 arrests, and is still roaming Hartford's streets. What does it take for someone to get jail time in Hartford? I guess climbing through a window into an occupied residence armed with a knife is not enough.

Again a great response by HPD and a great apprehension by K9 Rosco.
Posted by KEVIN BROOKMAN at 11:29 AM 10 comments:


At 7:45am a Hartford resident called the Hartford Police Department to report that while his 2001 Ford Taurus was warming up in his driveway, the vehicle was stolen by an unknown suspect. HPD Officer’s responded and reported the vehicle stolen. At 9:23am HPD got a second call from the resident. He reported that he was now on Maple Ave where he had found his vehicle and fired a gun shot. HPD Patrol Officers responded to the area of Campfield Avenue at Maple Avenue. The resident stated that he had just observed his stolen Ford Taurus being driven and then parked in the area of Shultas Place and Maple Avenue. The suspect/driver was still in the vehicle. The resident stated that he confronted the driver of his stolen vehicle, at which time the driver pointed a firearm at the resident. The resident produced his own firearm and discharged a round, striking the suspect/driver of his stolen vehicle in the cheek/jaw. The now injured suspect/driver of the stolen vehicle drove away at which time the complainant called the police to report the incident. Moments later, HPD dispatch received a report of an abandoned motor vehicle at the intersection of Webster Street and Crown Street. HPD Patrol Officers responded and located the stolen vehicle with a broken window and blood evidence. Moments later another call was received of a gunshot victim in the area of 215 South Street. HPD Officers responded and located the gunshot victim, who was transported to Hartford Hospital for a non-life threatening gunshot wound to the cheek/jaw area. It was learned that the gunshot victim was a 17yo juvenile from New Britain CT. who already had an active arrest warrant for auto theft charges and a lengthy history of stealing cars in the region.
The resident is cooperating with the investigation, and was transported to the HPD Major Crimes Division for debrief. The investigation revealed that he was a licensed pistol permit holder. He gave a statement and was released. At this time the investigation is active and ongoing.
HPD C4 is reviewing video of the area.
The Juvenile has admitted to point a weapon at the resident.
Juvenile is in Hartford Hospital with non-life threatening injury.
The Hartford State’s Attorney was notified.

PLEASE - DO NOT WARM YOUR CARS UP IN YOUR DRIVEWAY UNATTENDED
Posted by KEVIN BROOKMAN at 5:21 PM 7 comments:

IS CRIME IN HARTFORD REALLY DOWN THAT MUCH?

One thing the Hartford Police Department has done to be transparent  was to post their daily arrest logs on line.
For some reason, those logs were last updated on September 27, 2017
Maybe due to the shortage of staff , maybe the person responsible for the website retired.
Transparency is transparency and it needs to be consistent to be of any  value.
Maybe the Mayor's communication's staff could be taught how to do it, they don't seem to be
putting out much lately

UPDATE: 10:49am -Updating the website and "on-line" information is handled outside of HPD and apparently the Dispatch Center and MHIS (the City's IT Department) have been advised of the problem. In addition, the "COMPSTAT" reports and stats have not been updated for months on the HPD website, so could someone please take care of that also? Thank you. Within minutes of this post going up, City Hall was apparently reacting and phone calls were being made to fix the problem. The power of social media