MORE POLITICAL THEATRICS AND SOME DIRTY TACTICS ALSO, THE RACE FOR MAYOR IS AS DIRTY AS USUAL

In true Hartford political style, the old "in the gutter" politics and showmanship are alive and well. If only as much thought and energy was put into making Hartford a truly better place.

I took some more pride in the power of bloggers to make change yesterday. If you recall, last week I had posted and asked the question when was the last time we saw any of our elected officials, the Police Chief or his Command staff or any of our various "Poverty Pimps" on a street corner in a problem area on a Friday or Saturday night.

Well, low and behold last night I was watching the 11:00PM new on Channel 30 when they had a story showing that Mayor Segarra and Chief Roberts and their entourage to create a true media spectacle, had descended on some of those very street corners I had asked about last week. I guess I need to commend them both for their true leadership and coming up with the idea to actually hit the streets to see what goes on.

I might suggest though, Gentlemen, that you are not dealing with stupid people. Even a young man out on a corner with a gun tucked in his pocket, probably doesn't see your visit as really one out of concern for them. The television cameras and the press release probably made it clear that you actions were more self serving for your own tarnished images and an attempt to save your own political lives, rather than the lives of the numerous homicide victims still to come this summer.

And if that isn't enough theatrics, in a city that hardly ever fills empty patrol cars or walk beats when they really should be filled, tonight to complete the Pedro and Daryl Dog and Pony show, HPD is bringing in at least 18 officers on overtime for tonight.

That's not a bad idea, the extra officers might make sense.It probably would have made more sense after homicide number 5 or 6 to start doing something rather than waiting for number 17 to be pronounced dead though.

But while the Mayor's side show was taking place out in the open and on the streets, another Mayoral campaign is forming its own strategies in the dirty political backrooms of Hartford. I can't say for certain 100% that it is the Wooden campaign because I'm sure they won't take credit for it, but last night I got a call from an "800" number, claiming to want me to be part of a political poll.

Now, usually legitimate polls sample between 500 or a 1,000 people through a random sampling of phone calls. The number of people that have called complaining about the poll would seem to indicate that it was more of a mass marketing phone banking scam rather than a legitimate poll.

It is what is called a "push poll" and is meant to instill either a negative image of one candidate while making his opponent look favorable by the way the questions are phrased and asked.

The reason I would think it is Wooden's campaign is because he was the one portrayed in the favorable light, while very negative questions were asked about Segarra, and Vargas and McCauley were quickly mentioned and passed over after the first few questions.

Did you know Shawn Wooden is going to improve education, focus on small business, make Hartford safer and and basically come in as Superman to rescue Hartford. Oh, and another good thing mentioned by the "pollster". he's not been a political insider like Segarra who has "been around too long to be effective" as one of the questions referred.

Did you also know that Segarra moved out of Hartford after not paying taxes, went bankrupt, was "financially reckless" while on the Council, left office as Corporation Counsel in "disgrace" after being forced out by Mayor Mike, he and his "husband" are currently being sued by a City employee, he kept Perez "cronies" in office, including Police Chief Daryl Roberts and finally he fails to take blame for his mistakes.

These are all things you can learn from a "pollster's" questions.

Robles still has not entered a plea in Court after his arrest on felony charges. According to Robles' attorney, that delay is apparently being caused by the City of Hartford's lack of transparency and stalling tactics in providing Robles with documents requested through an FOI request.

The lack of a plea does seem unusual to many observers.Some of the claims such as asking the Judge for a continuance until after an FOI hearing, even though his attorneys had actually asked for the FOI hearing to be delayed themselves are raising questions. Some are questioning if Robles wasn't a State Representative if he would be given the same "courtesies".

Peterson unsuccessfully tried to get the 6th District Democratic Town Committee to reconsider the nomination for Robles's seat when she raised the issue of his alleged criminal activity and the ongoing IAD investigation at the Hartford Police Department. Robles denied the accusations and was eventually arrested by the States Attorney's office, after his reelection to the Legislature 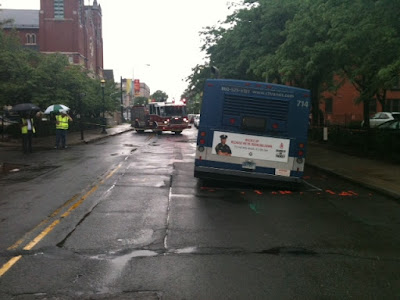 A Connecticut Transit bus was the latest victim of Hartford's streets today. The bus pictured above sunk into a sinkhole, or is it sank into a sinkhole. The sinkhole apparently opened up on Capitol Avenue near the intersection with Main Street.

Only one passenger was on the bus at the time and he apparently ran off once the driver told him the police had been called. No one was injured in the incident.

Tow trucks that were called to remove the bus originally backed off to regroup after concerns that their additional weight might cause the street to collapse more. Additional concerns were raised over an underground transformer under the bus that might have been on fire.
Posted by KEVIN BROOKMAN at 6:40 PM 1 comment:

Last week I had posted that the Hartford City Budget had increased almost $150 million dollars since the day Eddie Perez took office in 2001. I also said the mill rate had almost doubled from the low 40's in 2001 to about 75 mills now.

Someone had posted that those numbers were false. Well, here are the actual numbers year by year.

Keep in mind that no Mayor can single handedly increase the budget or the mill rate without the express approval of the City Council. The Hartford City Council needs to share the blame for this just as much as the "strong" Mayor.

Here are the real numbers, is it any wonder why we can't attract new business or spur economic development with tax rates like this? Just to give you some perspective, the next highest mill rate in the State of Connecticut is New Haven at 45.86, much lower than Hartford's. Just for a sampling here are a few others; East Hartford-33.82, Meriden-29.53, Bridgeport-39.64, Waterbury-41.81, West Hartford-38.38, Windsor-28.38. And if you wonder why Stamford is able to attract new business over Hartford, the answer is simple one, Stamford's mill rate is 17.17.For all of the Connecticut municipalities mill rates, click here to go to Connecticut's Office of Policy and Management website

Hartford Budget and Mill Rate Since 2001
Posted by KEVIN BROOKMAN at 3:14 PM 11 comments:

So appreciative, that when they heard their CSO, Mike Allen, lived in the area affected by last weeks tornadoes they began a fundraising effort to collect money to be used to purchase storm relief supplies.

According to Bill Howard of Parkville, as of today their efforts have already raised over $600.00.

Congratulations and keep up the good work
Posted by KEVIN BROOKMAN at 12:38 PM 6 comments:

TORNADO RELIEF: BOX DRIVE IS ON

As I posted last week, Hartford Police Officer Mike Allen had called me regarding the urgent need for cardboard boxes in the area damaged by last week's tornadoes.

Governor Malloy and his office responded almost immediately when I called looking for a drop off point for people to drop off cardboard boxes. Shirley Surgeon of the Governor's staff coordinated the calls and within a short time the State Office Building at 166 Capitol Avenue was set up as the drop off point.

Anyone with extra cardboard boxes can drop them off through Friday at the loading dock on the east side of the building (directly across from the Bushnell Theater)from 7:30AM until 4:00PM.

The boxes are needed so that the people whose homes have been damaged can pack up their belongings and put them into storage.
Posted by KEVIN BROOKMAN at 12:33 PM No comments:

I NEED TO VENT...NEXTEL/SPRINT IS A TERRIBLE COMPANY

For anyone who is a Nextel cell service subscriber, you probably already realize that.

Since Friday afternoon around 1:00PM there has been "some sort" of outage preventing most Nextel phones in the 860 area code from receiving incoming calls. Outgoing calls can still be made. I say "some sort" because Nextel/Sprint supposedly has been unable to identify, correct or even estimate when the problem will be fixed.

The major problem for me is that people trying to make incoming calls to Nextel cell phones don't even get any type of recording saying that they are experiencing a network problem or even directing the calls right to voice-mail.Instead all the caller hears is a rapid busy signal.

The frustrating part is the way Nextel is handling this. No text messages to their customers with updates as to what is going on, no e-mail alerts and nothing but a run around from their Customer Service people.

The final straw was just now when I called to get an update and the Customer "No-service" rep told me that it could be an AT&T problem because they provide the land line service to the cell tower and AT&T is closed until Monday. ARE YOU KIDDING ME? They were very accommodating though when they offered me a credit for 3 days. Then the operator I was speaking with told me I shouldn't feel too bad, that they have had an outage affecting portions of Michigan for three months now.

Oh, and now when I asked to speak to a supervisor, I have been on hold for over thirty minutes. Well the supervisor just got on the line, and lo and behold she wasn't even from the technical support department, she was a supervisor in the account cancellation department. They must be reading my mind.

I guess it is time to switch carriers after almost twenty years with Nextel. At the very least some sort of media notification should have been put out so that people might know what is going on.
Posted by KEVIN BROOKMAN at 4:37 PM 3 comments: