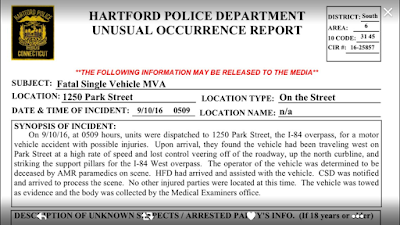 Posted by KEVIN BROOKMAN at 9:18 PM No comments:

IF IT MATTERS, I SUPPORT CHIEF ROVELLA 100% 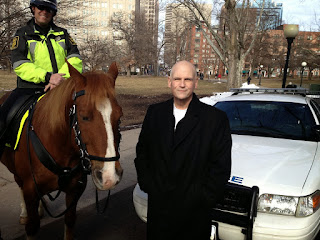 Our Country is at the crossroads when it comes to police relations. We in Hartford are very fortunate that the correct person was put in charge a few years ago to turn us onto the correct road when it was needed.

Chief James Rovella was the man to steer us then, and he is the right man to continue that course now. On Monday night the Hartford City Council will be voting on the resolution submitted by Mayor Bronin to renew Rovella's contract for two additional years. Common sense would say that the decision should be unanimous, but common sense is not always the strongpoint of politicians who are not driven by knowledge and understanding.

Chief Rovella, actually Chief Inspector Rovella  assigned to the Office of the Chief States Attorney at the time, was sent to Hartford in   July of 2011 to combat Hartford's problem of increasing gun violence. Through Rovella's creativity and experience the Hartford Shooting task Force was created  and immediately had a strong impact on Hartford's crime.

Although much of the success of STF can't be measured because we have no way of knowing how many shootings were actually prevented by their efforts, we don know the large number of weapons and the arrests made by STF have  had a huge impact on Hartford and its violent crime

Rovella's foresight was actually eventually copied in other cities such as New Britain and New Haven.

Chief Rovella was eventually appointed as the permanent Chief of HPD after the departure of Darryl Roberts.

I think one of Chief Rovella's greatest accomplishments was being "color blind" to the City's issues. For those unwilling to accept a middle aged white guy to command the City's Police Department, Chief Rovella immediately set about building bridges to the community and building the trusts and partnerships need to be successful treating everyone equally with respect and dignity.

That has been a tough balancing act to work with the community and his officer's who sometimes see things in a different way. Actually my wording might be wrong there, it is not an act, it is who James Rovella is. And he has been very successful at it.

Part of that success has been because of his insistence on transparency and including the community as partners in their Police Department. And with Rovella, it is not only transparency on the good issues, it is transparency on all issues, the good , the bad and the ugly. Public Compstat and his openness to the media are both examples of that.  No one can ever say they don't know where Chief Rovella stands on an issue.

I know from personal experience, Chief Rovella has always been very candid with me when I ask a question, many times more candid than I ever expected. It is the reason I trust him, I don't think he has ever misled me and he has the same reputation across the community , from what I understand fropm those who have personally dealt with Chief Rovella and respect him.

So as the Hartford City Council contemplates their votes for Monday night, I hope they realize that every Police Department in the nation has the potential of being the next Ferguson or Baltimore. In Hartford, we are extremely fortunate to have a Chief like James Rovella who has building the bridges since day one to prevent that.

I would ask that Hartford City Council members, as well as Hartford Police Officers, to put their personal agendas aside and do what is best for the City of Hartford , the Hartford Police Department and most importantly the people of Hartford, Renew Chief Rovella's contract for two years.

And finally, I would implore the Hartford City Council as well as Mayor Bronin to fill the position of Assistant Police Chief  at HPD. And fill it with Chief Rovella's potential successor so that in two years, there is a smooth transition to Hartford's next permanent Chief. As much as I would like to see the next Chief to come from within, I know that is a LONG shot. But leadership demands that a vacuum not be created  by a lack of planning for October of 2018.
Posted by KEVIN BROOKMAN at 1:56 PM 31 comments:

THE PASSING OF AN ERA AT HPD

Hartford Police Chief James Rovella today announced the passing of one of the longest serving officers in recent HPD history. Officer Patrick J. Sullivan, known to his co-workers and friends as "PJ" retired recently after serving HPD and the people of Hartford for over 36 years.

PJ retired as Hartford Police badge number 1 several months ago, having served in the Patrol division and most recently in the Traffic Division. PJ also served his country as a member of the United States Marine Corps I will post more details as they are made available.

PJ's wake is scheduled for Monday at the Farley-Sullivan Funeral Home, 34 Beaver Road in Wethersfield from 4:00PM to 7:00PM and the funeral will be held Tuesday , September 13th, at 10:00am at Saint Augustine Church, 10 Campfield Avenue in Hartford followed by burial in Marlborough Cemetery in Marlborough.

My condolences to the Sullivan and sincere thanks for PJ's service to our Country and our City
Posted by KEVIN BROOKMAN at 1:02 PM 1 comment:

Hartford Councilman John Gale informed members of the Hartford Democratic Town Committee by e-mail today , that he and Councilwoman Cynthia Jennings are  being sued by State Senator Eric Coleman
Here is Gale's e-mail:
On August 10, 2016, I was sued by State Senator Eric D. Coleman when a state marshal left papers at my home.
2.      The law suit was filed in court last Friday, September 2, 2016.
3.      The suit against me arises from events surrounding the Democratic party primary election contest of August 12, 2014 between Shawn Wooden and Eric Coleman.
4.      Prior to that primary, on or about July 17, 2014, I filed a complaint with the State Elections Enforcement Commission (SEEC).
5.      My complaint to the SEEC was that Senator Coleman used public funds to further his success in that primary election when he had the legislature pay for two district-wide mailers, one on July 11, 2014 and one on July 14, 2014.
6.      The SEEC determined (wrongly in my mind) that the mailers did not offend the normal scope of constituent mailers so as to merit additional scrutiny.
7.      Senator Coleman now alleges that he suffered “insult, damage to reputation, intimidation, abuse, shock, embarrassment, humiliation, mental anguish and emotional pain and suffering” as a result of my filing this complaint with the SEEC.
8.      He is seeking economic and non-economic damages in excess of $15,000, including punitive, double and treble damages.
9.      The counts against me sound in vexatious suit and malicious prosecution.
He has also sued Cynthia Jennings.  She filed the same complaint as I did with the SEEC.
1      A copy of the law suit is attached.