TAKE A DEEP BREATH AND COUNT TO 10

This is a posting I had wanted to write a couple days ago, but I thought it would be best to  calm down before I started writing. Our City is being run by some of te most incompetent people that have ever entered the public arena. It is like watching re-runs of a 3 stooge's episode, but the 3 Stooges never ran a City into the ground. Every day it becomes more obvious that the Mayor and his staff are total amateurs and incapable of getting the City's business done.

The examples arise daily, the HPD Cre3dit Union mess, the Police Chief search, the LSNI implosion ripe with apparent fraud and now the Rovella appointment seems to be hanging by a thread.

The common thread amongst all of these messes has to be the question who is advising Mayor Segarra, and why are we paying these people six figure salaries to create these disasters. We could probably get some elementary school kids to do a better job for free.

The Rovella hearing was the final straw for me. How do you have people questioning Rovella about his integrity and ethics when they themselves would probably have to look up the definition in the dictionary. How do you have a Councilperson questioning Rovella when the Councilperson himself was fired from the Hartford Police Department. I find that to be a huge conflict.

And who orchestrated the process for Segarra. Would anyone move into a house before the deal is done and you have the actual closing. The smart answer would be no, so why would the Mayor drag Rovella before the Council before the contract was signed?  I would imagine that if the Governor's Chief of Staff created such a mess with a potential  Department head, he would be looking for a job the next day. That's is how leaders work, they hold people accountable.

I have been fielding phone calls for the last three days from people asking me how I can support Rovella when he is holding the City hostage for free health care. This is where accurate information might be helpful, but this all should have been worked out before it was aired in the public. I don't need to speak for Rovella, but I know he is not necessarily looking for free health care. He is more than willing to pay his fair share, what he is looking for is the promise that if he doesn't make 5 years as Chief, it is Hartford you know and anything can happen, that he has a promise that he can purchase insurance from the City's carrier at the going rate retirees pay.

Rovella will be leaving a State job that allows him to purchase insurance from the State's plan, but only in July of each year during their open enrollment. The confusion I think came with the reference to the City's "EMBERS" plan which is given to all Department heads as well as Council people after 5 years of service to the City. Rovella was looking for the promise of a 5 year term as Chief, something that is not possible under the City Charter. the Police Chief and all Department heads are appointed by the Mayor and since the term of Mayor is 4 years and no one is assured re-election, any contract term over 4 years is not possible.

Although the whole process was bizarre, this is even more confusing as to how Segarra has handled Rovella's appointment. Segarra served as Council President in the final months of felon Eddie Perez's pre-conviction term.Segarra knew all too well what it was like to be disrespected by the Mayor and now he is treating this Council the same way.  There were no pre appointment meetings or consultation with the Council asking " here is what I am going to do, what do you think?"

Especially if you knew you were headed down a bumpy road, wouldn't you treat the Council as management partners knowing they could make or break your decision. Why would you not tell your Corporation Counsel to "get the deal done, no ,matter what" before the hearing? That is what leaders do, they express their vision and then make sure it happens. Not Segarra though, and not his staff.

And heading to Miami on vacation without the deal being done is reckless.

The Hartford Police Credit Union building purchase is another issue. How do you let your staff essentially kill a deal in the final hour for a building that will be renovated and returned to the Grand List to produce taxes for a cash strapped City. Is this the way we handle economic development deals in Hartford? And that "Federal Money" that was supposed to be available to move the building, apparently isn't "Federal Money "at all and the Credit Union was told it would be "City Money" to move the building. Don't we have better things to spend City money on?

And the articles in the Courant about the Mayor's "LSNI" program should send the Council over the edge on the Segarra Administration mismanagement. The latest article refers to fraud and paperwork submitted for work that was never done. Immediate hearings should be held, and referrals made to the State's Attorney for prosecution if any fraud is uncovered.

We deserve so much better than what we are getting from this Mayor and his incompetent band of fools surrounding him. I hate to say this, but at least Eddie Perez knew how to get business done. The Rovella mess would have never happened under Eddie Perez. The Council needs t step up now and send a message and turn this sinking ship around 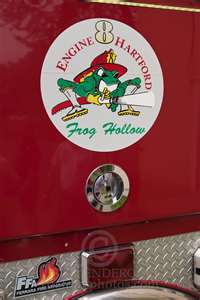 A Hartford firefighter has been arrested on numerous drug charges. Police sources have also confirmed that the firefighter was also dealing drugs out of the Engine Eight Firehouse on Park Street. Apparently undercover officers were able to make several undercover buys from firefighter Rafael Diaz, 38 while he was working at Engine 8.

Police served search warrants on Diaz at his home at 124 Douglas Street in Hartford on Thursday, he was subsequently charged with numerous counts  including possession with intent to sell and operating a drug factory.

UPDATE 5:40PM: Although Hartford's Fire Chief Edward Casares stated to the media that no drugs were sold out of the Park St. Firehouse, I stand by what I posted and the arrest warrant and the search warrant will verify that drug sales  were made by Diaz while he was on duty at  the firehouse. The documents will be posted here as soon as they are available afrer his court date
Posted by KEVIN BROOKMAN at 1:00 PM 39 comments:

This link is a must read if you want to see an honest analysis of the gutter we call Hartford politics. Ken doesn't pull any punches and says what most people are thinking when it comes to the upcoming elections for State Representative and Registrar of Voters. Krayeske even describes endorsed Democratic Registrar of Voters Candidate Ramon Arroyo as "cavorting with whores" a very true statement , except in this one case the prostitute was an undercover Polic Officer and Arroyo was arrested. Something he still refuses to address when asked about it. 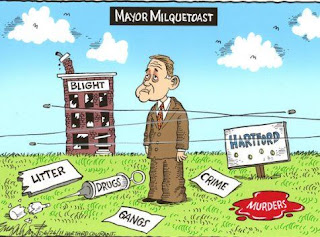 I found a posting on facebook.com today that is a collection of Hartford Courant cartoonist Bob Englehart's  editorial cartoons of Hartfords' current Mayor Pedro Segarra and his predecessor Eddie Perez. The cartoon pictured above I think depicts what many of us are thinking right about now. "Mayor milquetoast" seems to depict a mayor who just has difficulty making the tough decisions.Click here to view the entire collection of Englehart Mayoral cartoons

Although I think that might be somewhat accurate, he is also constantly being put in a position by his staff that ultimately prove to be embarrassing. The next few weeks should prove interesting as the Mayor will have an opportunity to actually make some of the decisions, including staffing changes that will hopefully prove to his constituents that he is capable of making the tough calls and actually stand his ground.

How fast he moves to restructure and shore up his LSNI program after the embarrassing articles this past weekend will tell a lot. The LSNI program was one of Segarra's pet projects that appears to be imploding under the leadership of Hartford's Chief Operating Officer David Panagore.

I think Segarra is good at identifying problems and knowing what the solutions should be, it's the follow through and holding people accountable that will ultimately be his downfall.

Even today's Courant article outlining the issues with the contract for Chief Rovella should be embarrassing to Segarra. If Rovella is his choice, everything should be done to get the deal in place by his Corporation Counsel.  Health care is handed out like candy at City Hall to department heads and even Council people. Any Councilperson completing 5 years on the Council is vested and receives health care for life. Former Councilwoman Veronice Airey Wilson  who "retired" after her arrest in a corruption scandal received those benefits, why shouldn't Chief Rovella?
Posted by KEVIN BROOKMAN at 2:35 PM 16 comments: