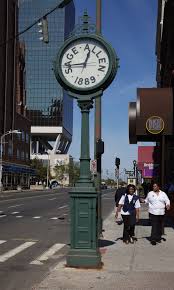 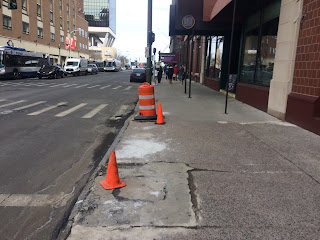 Empty sidewalk where the "Sage Allen" clock used to stand

We have all heard how "time flies". In this case "time flew". The historic Sage Allen clock was knocked off its base this past week by a City DPW bucket loader clearing snow off of the Main Street sidewalks in preparation for the Saint Patrick's Day parade crowds.

According to Hartford's Fire Chief and Acting DPW Director Reggie Freeman, the base of the cast iron clock was rotted and was not actually hit by the loader but the pile of snow being pushed snapped the clock from its base.

Chief Freeman says the City will cover the expense of repairing and replacing the clock on the sidewalk, where it has stood since 1889.

From Wikipedia: The store was known for the free-standing 'Sage-Allen' sidewalk clock, a local landmark built in 1899, that was located on the Main Street sidewalk in front of the store until the clock was damaged in a windstorm in 1992. The clock was later repaired and erected on another sidewalk in the city. Its importance as a Main Street landmark was known to the re-developers of the Sage-Allen building, and a deal was struck to return the clock to its traditional place. A clock specialist was called upon to restart the clock after its return to Main Street in the summer of 2007.