THE BLUE MASS AND A HEART ATTACK 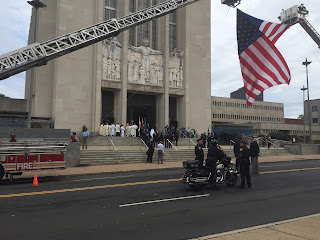 September 11th is an easy date to remember. This year it is even easier now.

On Sunday September 11th I went to the Cathedral of Saint Joseph for the celebration of the "Blue Mass" to honor our first responders. It was a beautiful sunny day, like I remember the morning of the  the original terrorist attack on the World Trade Centers and the Pentagon.

Everything was going well until I started to walk back home, and I noticed a slight discomfort in my chest. I just chalked it up to a little too much coffee for breakfast and indigestion.  I then stopped by my mothers house and the "indigestion" wasn't going away. I eventually headed home and grabbed the Tums to ease the indigestion.

Since my stroke last year, the tingling in my right hand and arm is a constant reminder, but when the tingling started in my left arm, I knew that wasn't a good. The pain then began to radiate across my back and shoulders and eventually to my jaw .All bad signs

At that time, the pain in my chest was still there, but more like indigestion, and not the severe pain I think is usually associated with a heart attack.

I decided not to gamble and I ended up in St. Francis ER. Sure enough, I was having a heart attack.

I was admitted, and that night, and while watching the Patriot's game, the pain became unbearable and began to feel like the classic "elephant on your chest" we always hear about. The nitroglycerin  was doing nothing and morphine soon became my best friend that night. Actually the morphine and my nurse Kevin who was coordinating my care both became my buddies that night. His compassion and professionalism were definitely reassuring during that time.

The rest of the next week was a fast paced adventure with plenty of ups and downs. All along the way, it is hard not to think that the big one is just a heart beat away, and trying to have confidence that if that happened, I was in the right place.

Initially, one of the cardiologists told me that with my cardiac enzyme levels, I was lucky I didn't ignore the symptoms or they may have found me in my home the next day after a massive cardiac arrest.

Modern medicine is still an amazing thing and I was in awe that something that may have very well killed me 20 years ago was being managed.

I have to say, it is a little unnerving when you are asked to sign a release where one of the side effects is death, but I built quick confidence in my cardiologist, Dr Freund, as well as the catheter team that was going to send a wire through my arteries and up into my heart. On the table in the cath lab, I got a very nice warm feeling and I asked what the drug they were injecting was and I was told Fentanyl.

I asked if that wasn't what was now being mixed with heroin casing numerous overdoses, and they assured me that it was being done a little differently than on the streets. Ironically, at the same time that my Fentanyl was being administered to me, members of the Hartford Police Emergency Response Team were ingesting Fentanyl on their own as the result of a drug raid and subsequent result of Fentanyl vapors becoming airborne. Luckily they all recovered fine.

Once the Fentanyl kicked in, I think Pedro Segarra or Ken Kennedy could have walked into the cath lab and told me they were going to do the procedure and I wouldn't have cared. Luckily though, they didn't, the procedures went well, blockages were opened and the rest will hopefully be history.

It is amazing to be laying and watch someone fish a wire up into your heart and open blocked arteries, all while it is displayed on a huge flat screen TV by your head

The prognosis is good and my heart is probably in better condition now than it was pre Blue Mass. Now the big challenge is maintenance and keeping it healthy

To everyone that supported me, visited me and offered words of encouragement and prayers, my sincerest thanks to you all
Posted by KEVIN BROOKMAN at 4:47 PM 15 comments: