No arrangements have been announced yet.

Although the Chief and myself had our differences at times, we were also able to work together at other times. Anyone that knew Chief Fallon knew that he was definitely someone that insisted on professionalism from his officers and that was always reflected in his appearance. From what I have been told, he was a tough boss, but he was also responsible for many members of the department advancing up through the ranks under his "mentoring".
Posted by KEVIN BROOKMAN at 10:03 AM 1 comment: 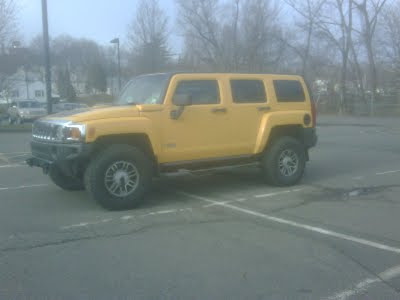 For the last month or so both here and on Cityline on Courant.com, the yellow hummer and the "hiring" of its driver have been a hot topic. Myself and others questioned the hiring of someone found guilty of voter fraud to work in the Registrar of Voters Office.

As more of the information regarding Prenzina Holloway became apparent, her yellow Hummer and its outstanding taxes of almost $4000.00 played a key role in the conversations. Then came the information that because of the outstanding taxes, the vehicle registration had expired and could not be renewed until all of the taxes were paid. Ms. Holloway was apparently driving the vehicle unregistered since the end of February when her registration expired.

Both here on this blog and at Council Meetings, myself and others suggested that Holloway was not a city employee, but rather a vendor working for the city at election time. That fact gave the Tax Collector, Marc Nelson the right to take any payments headed to Holloway and apply them to her back taxes. Apparently that happened a week ago Monday, when Holloway received what she thought was a paycheck, but instead received a letter from Nelson.

In his letter, Nelson advised Holloway that her check was being applied to her oldest taxes as payment. Apparently dropping the name of the Mayor and a Councilperson didn't influence Nelson, and the check was withheld. For those that follow this blog, I had issues with Nelson that were previously posted here. But as much as I point out critical points, I will also point out when someone is right.

Congratulations Mr. Nelson for doing your job, in what must have been an instance full of pressure to look the other way. Maybe "business as usual" for the old political guard is really coming to an end. The jury is still out on that one, but Nelson's actions show there is hope.

The icing on the "corruption-free" cake came today at about 1:30PM. Even though Holloway apparently knew her vehicle was unregistered, she continued to drive it. Keep in mind that a yellow Hummer is not an easy vehicle to blend in with traffic. I would think most people would immediately find a way to pay the taxes and register the vehicle, or park it in the driveway until it was legally able to take back on the road.

Not Prenzina. The vehicle was regularly driven with the expired registration with what appeared to be no concern for the repercussions of breaking the law.

Well, that came to an end today when Hartford Police officers conducting traffic safety enforcement noticed Ms. Holloway driving with no front license plate. She was stopped for that violation and upon further checking, the officer's realized the yellow Hummer was unregistered. Rather than tow the vehicle, Holloway was given the courtesy of driving the vehicle to her driveway. Hartford Police officers removed the unregistered plate, issued Holloway the appropriate tickets and advised her not to take the vehicle out of her driveway until it is properly registered.

Anyone want to place bets on whether the vehicle goes on the road unregistered?

Maybe, just maybe, this is the beginning of a new style of government where who you know just doesn't cut it any longer. Or, on the other hand, people might be getting tired of being embarrassed when the corrupt activities are exposed.
Posted by KEVIN BROOKMAN at 7:15 PM 4 comments:

UPDATE : HOW LONG CAN YOU DRIVE AN UNREGISTERED VEHICLE ON HARTFORD'S STREETS WITHOUT THE HARTFORD POLICE DOING THEIR JOB ?

UPDATE DECEMBER 1, 2009 And we now have the answer, 275 days. HPD took the yellow Hummer off the streets today, ticketed the owner/driver and seized the unregistered plates at about 1:30PM today, Tuesday, December 1, 2009.
Posted by KEVIN BROOKMAN at 6:59 PM No comments:

The proposed homeless shelter at Center Church in Hartford has stirred a lot of controversy. According to media reports there seems to be a couple different versions as to what is being proposed for the site. Is it an "overflow shelter" when other locations are full to capacity? Is it a "no freeze" shelter used when certain weather conditions exist? Is it a regular shelter open every night from December 1st through April 1st?

A COURTHOUSE RALLY FOR THE RIGHT REASON

Most of us recall a "prayer rally" that was held on the steps of the Hartford Courthouse by Mayor Perez after one of his court appearances. I think most people thought that was very inappropriate.

Tomorrow another rally is being held on the steps of the Hartford Court for a much different reason. After the recent shooting of Hartford Police Officer Michael Bodner, comments were made to the media that suggested the police officer might be better off dead, and I'm paraphrasing there.

After reading on-line today that four police officers were essentially ambushed in a coffee shop in Washington state and were shot and killed, it drives home the difficult and dangerous nature of police work today. I think most people would agree that the Hartford Police Department is less than perfect and we would like to see even more improvement. The question though is where does the fault for that lie? My feeling is that it lies in a lack of funding on the part of city hall, resulting in a lack of manpower and a lack of appropriate resources dedicated to public safety in Hartford.

The attached press release from the Hartford Police Union outlines the details for Monday's press conference at 9AM at the court at 101 Lafayette Street.

Every day, Hartford police officers face dangerous situations as they protect Hartford’s citizens from its most violent criminals. After two recent violent attacks on police officers by convicted felons, including one incident in which Officer Michael Bodner was shot in the line of duty, the Hartford Police Union has scheduled a press conference to make the public aware of the growing threat to public safety.

This Monday, November 30, 2009, at 9 a.m. at 101 Lafayette Street, the Hartford Police Union is calling upon all members of the community -- including concerned citizens, fellow police officers, and elected officials and representatives from throughout the state -- to stand united in support of Officer Bodner and all other police officers who put their lives on the line every day.

This press conference is being scheduled after friends and family members of Officer Bodner’s assailant appeared at the assailant’s arraignment on November 12, 2009 and made inflammatory and divisive comments outside the courthouse. Some tried to justify the shooting of a police officer.

According to the U.S. Department of Justice, in 2008:
• 58,792 police officers were assaulted in the U.S.;
• 41 officers were murdered;
• 68 officers died in accidents while performing their duties.

In Hartford, 20 percent of the officers have been assaulted in 2009 alone.

Hartford Police Union President Richard Rodriguez said that the press conference is intended to show that Connecticut will not tolerate an assault on the rights of police officers. The Hartford Police Union will call upon the state Legislature to pass legislation mandating severe minimum sentences for those who assault police officers once convicted.
Posted by KEVIN BROOKMAN at 6:23 PM 2 comments: