Hartford Police officer Luis Feliciano had skated on an alleged homicide charge, skated on evidence of drug trafficking after his apartment was searched by Springfield PD during the investigation into his alleged involvement in a deadly stabbing that led to his arrest on murder charges.

He even was able to get hired in Hartford despite concerns by Springfield officers over his alleged gang connections that resulted in him being turned down as a Springfield PD applicant.

But he couldn't skate from allegations turned over to HPD by FBI agents that detected his thefts from the Hartford Walmart during a parallel FBI investigation. It is unclear if the FBI uncovered the thefts and there may possibly already have been a current investigation underway by HPD Internal Affairs.

Chief Rovella issued an e-mail statement to all Department members late this afternoon advising them of Feliciano's arrest.

Another twist was uncovered tonight. After a short time as a Hartford Police Officer, Feliciano reported his department issued weapon had been stolen during a burglary of his Springfield apartment. The weapon was later recovered by Springfield PD during a drug raid, no further details were available at this time as to any circumstances of the theft or recovery .

According to sources, the second charge may have stemmed from Felciano's possession of what was called by one source "a magnetic key" a device used to remove anti-theft tags and devices from high value items

According to sources, it is believed that additional charges against Feliciano will be forthcoming as the investigation proceeds

Her is what the three candidates for the 2nd Senatorial District Primary next week had to say at last weeks forum at Rawson School. The video is courtesy of J. Stan and Nyesha McCauley and their on-line programming which can be viewed at their website "accesstv.org". Take a look and see who you find more believable

PAINTED INTO A CORNER 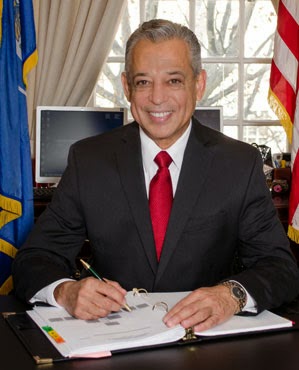 Real or wax figure?
Mayor  Segarra likes to quote one of Hartford's real leaders  frequently. He thought so much of one of Mark Twain's famous quotes that he had a copy of it framed to present to Hartford Police Chief James Rovella on the day he was officially sworn in as Chief.

Twain had said that "if you always tell the truth, you never have to remember the lies". That might prove true for Segarra quite soon as we see if the truth  or the lies are actually reality.

Segarra's credibility definitely took a hit as many residents were vocal about the less than transparent negotiations conducted on the Rock Cats deal. More than one person at community meetings stated publicly that they no longer trusted Segarra.

During those same meetings Segarra and his Development Director stated that the City Hall phones were apparently ringing off the hook with developers clamoring to be part of the deal. Segarra would state, with Deller's backup, that they were getting at least 10 to 12 calls a day from people wanting to be part of the deal. If that was actually true, and I will say I am skeptical, it is now time for Segarra to put up or shut up.

Let's just say that in the first few days after the announcement that they were getting 10 to 12 calls a day, my math says that adds up to at least 50 to 60 calls in the first week alone. By the Mayor's own press release earlier, only four proposals were submitted by the Friday August1st deadline. And one of those four is for a separate parcel and not the baseball stadium per se. So again, by my math, that makes 3 legit proposals, and since we have no idea what they contain, we aren't even sure those are actually legit.

So now Pedro, it is time to "SHOW US THE MONEY". Were you actually getting the numerous calls you claim or was this just another adventure into Rock Cats fantasy land. Just 3 Proposals actually submitted with all those calls makes me have to question the effectiveness of your team. Or is it just that developers question your credibility as much as your own residents?

Could it be that private investors are as cautious about putting there own money on the line much more than our politicians when it comes to gambling with taxpayers dollars. If it is such a great idea, shouldn't there be a stack of proposals waiting to be reviewed for the resurrection of NoDo or DoNo or DoDo, whatever it is called today.

And after the dust settles, let's see if the truth comes out. Any good salesperson keeps detailed records of their leads and conversations and I would expect nothing less of Mr. Deller and his highly paid  staff. Let's see who actually called and when and see what that adds up to. My gut is saying a lot less than 10 or 12 calls a day.

If you always tell the truth, you never have to remember the lies.
Posted by KEVIN BROOKMAN at 8:04 PM 42 comments:

BEING HELD TO A HIGHER STANDARD?

Tishay Johnson was sentenced to 3years probation, 6 months of home confinement, 300 hours of community service and $100.00 in court fees. Who says crime doesn't pay? And no mention of touching his pension either.