One of the things that has paid huge dividends over the last decade or longer has been the time and effort put into Hartford's Community policing program. Hartford hasn't seen many of the problems that we have seen across the US where tensions have blown up between the police and the community. That hasn't happened by chance. It has occurred because our residents have been able to build personal relationships between members of the Hartford Police Department and the community they serve.

I think the goal is that every Hartford police officer will see themselves as a community service officer, but with the current staffing levels, we are developing a police force of robotronic report takers chasing from one call to the next. The time for building interpersonal relationships between the police and the community are quickly coming to an end.

Like I said before, it would be my hope that every Hartford officer sees themselves as a community service officer, but it would seem that very effort is being made to decimate those relationships.

The move to remove Animal Control Officers has had a direct effect on those relationships. ACO's are still an arm of HPD and they typically have a positive influence on police/community relations, as well as providing a vital role in the safety of our community.

The HPD mounted unit is also being decimated, actually decimated is the wrong word, disbanded is more appropriate. I think more for payback on political promises made during the campaign to someone that delivered votes than for real budget reasons. The actual monetary cost for the upkeep of the mounted unit is probably around $100,000 a year for food, bedding and vet costs. The police officers assigned to the unit were already fixed budget costs and now they are just being reassigned elsewhere.

That $100,000 cost for the mounted unit is less than what will be spent on some special events in the upcoming weeks. Special events that we will most likely see no, or very little reimbursement for. Again , it is about payback for votes at election time that we are making suck reckless decisions to decimate  police efforts in Hartford.

And these decisions have nothing to do with Chief Rovella. These decisions are being made above his pay grade They are not decisions being made about what is best for Hartford, but more for the future of political careers and future aspirations. I think a future Baltimore of Ferguson  happening in Hartford will be the end to those political aspirations. I pray that never happens, but we can't just eradicate years of progress after one election period and budget cuts while still throwing money away in every other direction.

Community  Policing is not just a "program" it is a philosophy. Residents who have formed bonds with their "CSO's" or community service officers have been a large part of controlling Hartford's crime efforts. They are much more willing to call and trust an officer that they have a bond with rather than calling the dispatch center and spilling their guts to someone they have never met and have no trust factor with..

These relationships can be witnessed at just about every NRZ meeting across the City as residents interact with police officers they know and trust.

Ironically this weekend is the bid changeover at HPD where new assignments and transfers take place for the next three months. Many officers I spoke with this past week told me it was their last week as CSO's or in their current positions. As of Sunday they go back to patrol to fill holes created by years of incompetence by the Administration's and failing to hire. Previous Council's and the Mayor had been warned repeatedly by Chief Rovella of the dangers of ignoring staffing needs. Now we are forced to pay the price for those years of incompetence.

Last year, Hartford's community policing program was honored and recognized by President Obama in a White House ceremony. At that time Chief Rovella was quoted in the Courant as saying "Community policing is something we have been working on for years," Police Chief James C. Rovella said in a statement. "The more people involved in our efforts, the stronger our police department will be and the better our city will be."

I guess "what a difference a year makes"
Posted by KEVIN BROOKMAN at 12:27 PM 13 comments:

THE " WE THE PEOPLE PROGRAM"

Sorry for the delay in posting this. This was our last program for May. We will not be doing a program Monday, but we will be back the following week.

HARTFORD CAN NOT CONTINUE TO DO BUSINESS LIKE THIS, CHAPTER 3

At many times, Hartford City government appears to be the height of incompetence. City employees who are paid very large salaries to protect the interests of the taxpayer's of Hartford, seem to do just the opposite.

Time and time again we seem to hear about the dirty deals and everyone benefiting off City Hall, except the people that have made the commitment to live here. Whether it is properties being given away for $1.00 to  outsiders under the guise  of "economic development" or a stadium deal that appears to be very flawed from the start.

Here is just one more example of how flawed that deal was. In an  agreement  between  the City of Hartford, Centerplan and DONO Hartford, LLC from February 4, 2015. To protect the City (and its taxpayers) a clause was negotiated in that agreement to require Centerplan and DONO Hartford LLC,  to provide a letter of credit to the City  to protect the City's interests in the event of a default, exactly like we are seeing right now.

The agreement was pretty specific, and the exact wording from the document is below.

Unfortunately, according to numerous City Hall sources, the letter of credit was never provided, and apparently does not exist , and no one ever followed up to require it. This incompetence now apparently spans at least two administrations, it was begun by the Segarra Administration and it would seem that no one in the Bronin Administration has followed up to make sure all of the required "t's" have been crossed and the "i's" dotted, since taking over.

This is, or should be basic construction management for anyone that understands the construction industry. I think it is clear by now between Dillon Stadium and the Yardgoats stadium, that no one on the City level understands what it means to "manage" a construction project.

Normally, unless you are working for the City of Hartford, failure to comply with those requirements is a quick way to the exit door from the project until you are in compliance. That is done to protect the interests of the client and the integrity of the project. I guess no one is interested in protecting our interests as the client.

Does no one in Development Services or even on the Stadium Authority know how to prepare a checklist and put a simple check mark after the required documents when they are received?  Letter of Credit from Centerplan.....check. Or if it is not received a year and a half later... maybe some follow up.

Will we see baseball in Hartford this year? Who knows.

In a report requested by Josh Solomon of the Yardgoats, it looks like there is probably quite a bit more than only 5% incomplete work left to be done

Here is the report. Pictures as well at the end of the document

WHERE IS THE DILLON GRAND JURY? HARTFORD FILES LAWSUIT

WHO IS TELLING THE TRUTH? DOES THIS SOUND 95%COMPLETE

Here is Max Reiss from NBC Conneticut's story tonight after his tour of the Yardgoats Stadium with Yardgoats owner Josh Solmon. Does it sound or look like 95%complete?

ONE FOR THE GOOD GUYS 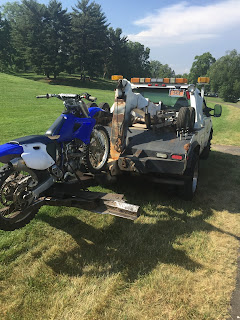 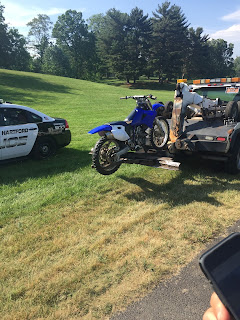 This is a sight I would like to see a lot more often. An illegal dirt bike that was operating off road in Colt's Park was seized today by HPD. The operator had the misfortune of trying to race through the park and stalling his bike in front of a South CSO. HPD closed in, the bike was seized and towed, and hopefully , after legislation that was passed this last session, it will be headed for the crusher.

I attend a lot of community meetings throughout the City. I have never once heard someone say they were considering moving because they were fed up over shootings or even homicides ( both of which are on the decline this year) I have heard plenty of people say they are fed up with the noise and the danger presented on our streets by illegal dirt bikes and ATV''s.

They are a menace pure and simple  and a definitely an adverse quality of life issues. Unfortunately, this one dirt bike is only one of thousands of them on our streets. More efforts like this one though will  gfo a lonbg ways toward sending a message. A well publicized "community crushing" will also help.

These ATV's are a huge thorn in the side of HPD, but a few weekends of  directed patrols to combat this nuisance will definitely help. Unmarked vehicles to track  the offenders , and maybe putting a few hours on a Homeland Security chopper will send a real strong message.

In the mean time,HPD has to make a concerted effort to respond to the community complaints when they are reported. If the community is going to be encouraged to report the where abouts of these ATV's, they deserve a response. Their reports can not just be logged in and cleared by a dispatcher because HPD is busy. They need to be a priority before someone, either an illegal operator or an  innocent driver or pedestrian is killed

In the meantime, good job to all  HPD Officers getting this ATV on the hook  and out of the Park.