As much as Hartford Police Chief Daryl Roberts and many members of the Hartford Police Department try to build police/community relationships, it seems that some just aren't getting the message.

Several sources have confirmed that an Internal Affairs investigation is underway into the assault of a prisoner inside the Hartford Police Department booking area. The incident, which has all been captured on video recordings, occurred when one officer, reported to be Officer Rhashim Campbell, entered the cell and allegedly assaulted the prisoner.

After assaulting the prisoner in his cell, Officer Campbell removed him to a larger open area in booking, at which time a second officer allegedly became involved. The second officer is reported to be Officer Kent Lee, a department veteran. From what sources are telling me, the two officers then handcuffed the prisoner and knocked him to the floor , at which time the assault continued with kicks and punches being delivered to him as he lay on the floor.

Although the alleged actions of the officers is deplorable, the response of HPD should be commended. The victim of the assault apparently didn't make a complaint immediately after the incident. What did happen is that one of the officer's involved was apparently bragging about the incident inside Police Headquarters and his comments were overheard by a sergeant. HPD Internal Affairs launched an immediate investigation into the incident and confirmed the beating through the video recordings.

At the time of the assault a supervisor was present in the area, but it is unclear what actions he may have taken to stop or report the incident , if any. The regular booking sergeant was not on duty and Lieutenant Kevin Ahlquist was working an overtime shift supervising the area.

Sources are also telling me that arrest warrants will be prepared for those officers involved once the level of criminal conduct has been determined.

Although this will most likely be another black-eye in the national media for Hartford, the actions of Chief Roberts and his leadership in responding swiftly to the incident should also be recognized as a positive step forward in building community trust and confidence.
Posted by KEVIN BROOKMAN at 7:19 PM No comments:

A SLIGHT TITLE CHANGE- "IF YOU WERE GOING BROKE, WOULD YOU TAKE A TRIP TO SAN ANTONIO, TEXAS ?" 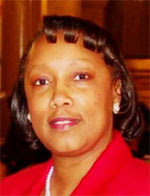 After last week's revelation that Mayoral Chief of Staff Susan McMullen jetted off to an all expense paid vacation to Florida with ten of her City Hall allies, I am somewhat surprised to hear of more taxpayer paid travel. But then again, why should anything happening at Hartford City Hall surprise anyone.

Council Majority Leader Rosezina "rJo" Winch will this week be taking her show on the road as she jets off to San Antonio, Texas on the Hartford taxpayers dime. Winch will be attending the "NBC-LEO" Congress of Cities and Exposition in San Antonio November 10th through the 14th. All expenses paid by the taxpayers of Hartford, at the same time that employees are being laid off.

Hopefully, Winch will avail herself of the training seminars available during the four days, I might suggest Wednesday's class from 9:00am to noon in room L13"Building Public Trust Through Performance Leadership", if that is full try room L16
"Guarding the Public Checkbook: Local Government Finance".

I am sure when the issue is raised, Winch's response will be similar to McMullen's, that they actually save the city money by taking these trips. That may be true, but drastic times call for drastic measures. If laid off employees are facing foreclosure because they lost their jobs, is it really proper spending any money that is not necessary to vital functions of the operation of the city?

Maybe it would be proper to take part of your salary as a councilperson and pay for your own trip to further your social networking. Didn't the Council call for a travel ban at budget time?