THOUGHTS AND PRAYERS FOR HPD TONIGHT 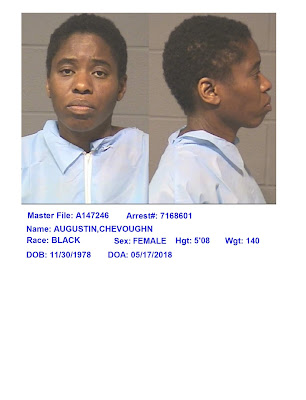 A veteran Hartford Police Officer was critically injured today responding to a disturbance that was related to property damage involving a landlord and tenant. Below are the details as they have been reported to HPD Major Crimes Detectives:

On Thursday, May 17, 2018 at 9:40am Hartford Police Department patrol officers responded to the apartment building at 5 Constitution Plaza on the report of a disturbance involving a female tenant of the building. On arrival, Hartford Police Department patrol unit #12, made contact with the suspect (Female- Chevoughn Augustin) on the 9th floor. At some point during the investigation a struggle ensued and the suspect knocked the officer to the ground, grabbed a large ceramic kitchen knife, placed her in a choke hold and began stabbing the officer in the neck. The officer managed to radio for assistance.

A 10-0 (Officer in distress/Emergency call) was initiated and all available HPD officers responded to the location. Building management and maintenance workers were in the immediate area, heard the struggle, and came to assist the officer. The maintenance workers were able to subdue and disarm the suspect. Back-up officers arrived and began immediate bleeding control and life-saving measures. Back-up officers carried the officer down to an awaiting ambulance. The officer was bleeding badly from the neck and unable to communicate. Back-up officers also secured the suspect and knife. The injured officer was taken to Hartford Hospital ED.


(Note: the accused has aliases and detectives are working to confirm her identity)

Building management and the maintenance workers were interviewed by MCD detectives. Major Crimes detectives confirmed, if not for their immediate intervention, this scenario would have been fatal.


At the request of HPD and the Officer's family, I will not be posting her name at this time, but please keep her in your thoughts and prayers during this critical period in her recovery. And please keep the rest of our Police Officer's and first responders in your prayers during these difficult times.
Posted by KEVIN BROOKMAN at 7:21 PM 40 comments: