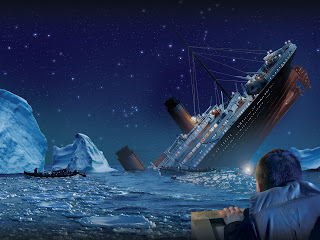 If Mayor Segarra is comfortable with his decision to provide ESI bonuses, you sure wouldn't know it by the e-mails and press releases flying around over the last twenty four hours.  For something that is supposed to be a good thing, every effort was being pulled out to try to make us believe the bonuses make sense as Hartford is flying toward its own Fiscal Cliff like the Titanic toward an iceberg.

I am not sure Mayor Segarra has not grown out of touch with his constituents. To try to justify a $10,000 bonus to one of his buddy's who is already making over a $150,000 a year salary doesn't sit well with most residents I have spoke with. One former City employee I spoke with yesterday was telling me how glad they were spring was here because they were struggling to pay their heating bills. Other seniors tell the stories of cutting expenses to pay for medications.

Those are the realities Hartford resident's face.,  City hall employees who actually show up for work and do the jobs they were hired to do are handsomely rewarded with bonuses. But at City Hall , the orchestra is still playing loudly on the Lido Deck as that first iceberg begins scraping the hull and impending disaster should appear obvious to anyone watching.

The iceberg begins to rip open the hull ,mainly because Captain Segarra was in his quarters signing ESI bonus checks. His Media spokesperson runs below decks frantically trying to close the watertight doors to prevent as much damage as possible, but the damage has already been done. City Hall is taking on water and beginning to list to port side.

Luckily the Mayor's Cabinet members were already on deck and they are able to shove their way into the lifeboats, leaving Hartford's residents sitting in the deckchairs as the icewater comes up around their ankles.

The fate of the residents of Hartford is sealed because the life boats are full and they have no where to go except listen to the Band playing as their futures slip away.

While the media spokesperson was trying to seal the watertight doors, she was also meeting other people at the railing, myself included to explain that Segarra wasn't nearly as reckless as his predecessors and the whole story needed to be told.

Segarra's ESI bonuses were more palatable because they were a fraction of his predecessor, Eddie Perez. Perez had a high annual figure $179,484 while Segarra's highest was a mere $38,184.

While I looked at the list it was interesting to me that with the exception of one assistant Police Chief, there appeared to be no bonuses to any police officers or firefighters, some police officers who had actually been shot in the line of duty. Now to me that would be exceptional service. But then again they know what the salary is when they accept the job, and getting shot, unfortunately is part of the job they accept when they sign on and the salary they agree to.

Why that same thinking doesn't apply to a department head making $150,000 dollars a year is beyond me, They were hired to do a job, now do it and be happy with your salary, if not, get out the wanted ads.

The rhetoric continued this afternoon as another press release was fired off, seeming to blame the criticism of the Mayor on a Councilman who has a political agenda. Maybe, just maybe the Councilman might have a little bit better gauge of the public sentiment regarding bonuses given out by a cash strapped City. The release even took a shot at the Councilman's assistant because she received an ESI.


“To suggest that we don’t take Hartford’s fiscal challenges seriously is completely false and inconsistent with every financial decision I’ve made since the day I took office. The ESI’s are just that; compensation for additional responsibilities or the delivery of services that goes above and beyond the usual. The average ESI amount is $2,000 and they fall within the allotted payroll budget that is approved by Council. We follow a judicious process that involves a series of interdepartmental approvals, all within the parameters set forth by Human Resources.


“To juxtapose them with the 14 individuals who were laid off is false advertising. The layoffs were a result of not securing $1MM in employee concessions; part of Council's unanimously approved budget. The ESI’s are distributed only after thoughtful consideration, many of those employees have also taken furlough days; questioning them suddenly undermines their hard work, including Mr. Kennedy’s assistant who received one in 2011.

I am not sure that anyone grasps the severity of Hartford's fiscal condition. I am also pretty sure that no one at city Hall with their $100,000 plus salaries, city vehicles , golden pensions and excellent health care benefits are in touch with what the average Hartford resident faces everyday to survive.

A $70million dollar deficit for Hartford's budget next year seems to be a minor inconvenience  for Mayor Segarra and his Administration as they continue to spend like money is being printed in the basement of City Hall and City credit cards are not real money being spent.

Last night I attended the Council's  OMB (Operations, Management and Budget) committee meeting and listened to those defending ESI bonuses (more on that in another posting later) and was amazed by a spreadsheet showing how much money the City gives away for police and DPW coverage for special events that occur in the City.

The spreadsheet, shown below, was provided to the Committee by COO Saundra Kee-Borges. The Council, in its infinite wisdom, had passed a resolution last year that capped the amount for events and parades at a maximum of $10,000.  This was apparently done to appease segments of the community who would have events and then never pay the bill, leaving the City holding the bag for large amounts of Police overtime.

As an example, the 5C's. the group that runs the Saint Patrick's Day Parade typically would accrue costs of anywhere from $30,000 to $35,000 for the annual event. The 5C's had always paid that amount to the City to clear their bill. Other parades were not as forthcoming with the payments.

The spreadsheet gives no indication of which groups actually have paid their bills and which are outstanding.

This is the type of thing that the City cannot afford as we head into projected multimillion dollar deficits over the next several years. If organizations cannot afford the expense of a lengthy parade route, then offer them use of Parks or areas that do not require a police officer at every intersection along a lengthy route.

According to the COO's report over $300.000.00 has been given away in the last year. The other interesting part is that these fees have to be absorbed into the Police and DPW budgets which affects their flexibility to cover other areas with overtime or increased staffing when needed.

The report is difficult to read because of the small text. it might be easier to print it and read it or go to scribd and magnify the image

Hartford's embattled Director of Human Resources took, a "leave of absence " yesterday according to an e-mail sent to City Hall employee's yesterday.

According to City hall sources, the "leave of absence" is the cover story concocted by the Mayor's Office and Valda Washington is not expected tot return to City Hall anytime soon.

Despite numerous issues, some of them outlined previously here, Washington didn't seem to be a good fit for Hartford. Several sources related that Washington's fall from Grace began when she refused to authorize a $25,000 raise for an employee of Mayor Segarra's buddy and "Cabinet " member Jose Colon-Rivas. Apparently Colon Rivas wished to raise the salary for his employee from $80,000 per year to over $105,000 and Washington felt the jump could not be justified and she refused to approve the raise.

Things took a downturn from there. I am sure there will be a lot more to come out from this story considering what I have been told already
Posted by KEVIN BROOKMAN at 2:01 PM 8 comments:

As the City of Hartford tries to close a projected $70 million dollar budget deficit, some are starting to question if there is any financial management at City Hall. City spending seems to be continuing "business as usual " as large charges continue to be racked up monthly on City credit cards, many of the charges are for items that are far from necessary. Many of the charges seem to be large amounts for food and beverages purchased by City employees at local bars and restaurants.

The city credit cards or "P-Cards" as they are referred to at City Hall seem to be routinely used without much oversight as to how or why they are being used. Recent purchases included flat screen televisions for the the Mayor's Chief of Staff;'s office as well as a flat screen television for the Office of the Mayor's Communication's director as well.. According to sources, cable television was also installed so they could watch the TV's in their offices.

Council President Shawn Wooden is expected to request an audit of the P-card use as well as P-card spending policies at today's monthly Audit Commission meeting. Another area that has been a chronic problem is the issuance of bonuses to City employees. The ESI program as it is known seems to be a backdoor route to circumvent issuing raises to employees, many of them who are already at the top of the salary for their position.

It just seems that city employee's know what their salary is when they take a position and a $150,000 annual salary isn't enough to keep someone happy in a cash strapped city? One of Mayor Segarra's confidants and former Chief of Staff, Jose Colon -Rivas is paid an annual salary of $152,250 as Director of Family and Children and Recreation Services. Colon Rivas was issued bonuses of almost $12,000 above his salary in 2012.

How can they issue bonuses knowing that we may be forced to lay other employees off due to budget shortfalls. And all indications that Mayor Segarra's buddy doesn't even live in Hartford, at least not at the address he claims to be living at. The list of ESI bonuses are below. Some that should raise eyebrows are those to Colon-Rivas , Saundra Kee-Borges who is not only collecting a pension from the City as well as her current salary and a large bonus of $4352.63. I guess a love for the City comes with a hefty pricetag.

Also the Bonus to L. John Van Norden of $2625.00 seems a good deal for a City Attorney who isn't even recognized as an attorney in CT and can't practice law in Connecticut. I think he might owe us a refund rather than accepting a bonus.

The interesting part though is that your viewpoints must drastically change when you go from being a councilmember who frequently butted heads with a Mayor headed for prison, to when you actually become Mayor yourself. The following quote was directly from our current Mayor, former Councilman Pedro Segarra, regarding ESI bonuses handed out by former Mayor Eddie Perez "We have people losing their jobs, we have people that don't get that similar treatment and we are in deep financial straits here," said Councilman Pedro Segarra. "For anyone to think they can run our city like a Fortune 500 company making millions in profit -- it doesn't match our current reality."    You can read the entire article here