Gov.-Elect Lamont Nominates James Rovella as Commissioner of the Department of Emergency Services and Public Protection


New Haven, CT –  Governor-elect Ned Lamont today announced that he has nominated James Rovella as Commissioner of the Department of Emergency Services and Public Protection (DESPP). In addition, Rovella has selected Regina Rush-Kittle as Deputy Commissioner of Emergency Management and Stavros Mellekas as State Police Colonel.


“James, Regina, and Stavros are experienced law enforcement officers, having dedicated their lives to keeping our streets and communities safe in Connecticut,” said Lamont. “I am proud to welcome these three dedicated public servants to my administration’s leadership team. Together, we are deeply committed to making sure our state remains a great place to live, work, and raise a family.”


“I thank Governor-elect Lamont for the trust he has placed in me to lead the Department of Emergency Services and Public Protection,” said Rovella. “My decades in public safety have been guided by a commitment to building trust between law enforcement personnel and the local communities in which they serve. That priority will remain a focus as I work to make this state a safer home for all of our residents.”


“I am grateful for the opportunity to return to public service in Connecticut,” said Rush-Kittle. “I enjoyed my time at DESPP working with the men and women who help keep this state safe, and I appreciate the opportunity to begin this next chapter of my career. Working together, we can ensure that Connecticut’s residents are safe and the criminal justice community and advocacy organizations alike are part of the solution.”


“Our State Troopers risk their lives every day to protect our communities, and I am eager to begin this new role advocating on their behalf,” said Mellekas. “Having a number of different assignments within the State Police will allow me to better support my colleagues and work with the administration to make Connecticut a safe place to live and work.”


James Rovella has devoted his career to public safety, starting as a patrol officer, then detective, with the Hartford Police Department. Rovella then served 12 years for the Office of the Chief State’s Attorney, where he eventually became Chief Inspector and oversaw all Medicaid fraud, financial, and statewide criminal cases for the state's chief law enforcement officer. In 2012, Rovella returned to Hartford to become its Chief of Police. Rovella was recognized by President Obama and the White House for strengthening community relations in Hartford.


Stavros Mellekas has served for nearly 25 years with the Connecticut State Police, starting as a patrol trooper and rising through the ranks to eventually become a Lieutenant Colonel. Mellekas currently oversees field operations for all three state districts, each of the three Major Crime squads, and the Bureau of Special Investigations. He has been awarded several citations for outstanding police work and meritorious service.


Rovella will begin serving as the Commissioner-designate when the Governor-elect is inaugurated on January 9. His nomination will be sent to the General Assembly for its advice and consent.

DON'T LET THE FACTS GET IN THE WAY OF THE HEADLINE

I was almost going to title this posting as "FAKE NEWS" but someone else has been using that phrase a lot lately, so I will try to stay original and just stick to the facts.

A couple months ago I received a tip about Hartford Assistant Police Chief Jason Thody allegedly compromising himself in a deposition with what the source said was perjury on Thody's part. They claimed the facts were all well documented in the transcripts of the deposition . It sounded like it was going to be a good story once it all fell into place.

Once I started looking into the accusations, it went from what I thought was going to be a potential good story to a very definite NO story and the tip as described just wasn't panning out..

Now a little background here.  just to set the stage.  I have not been a longtime fan of Assistant Chief Jason Thody. Anyone who is a regular reader of this blog or searches my archives will most likely find some very negative postings.

A few months ago I received a call from HPD's new Police Chief David Rosado. He was well aware that I was not a fan of Jason Thody. Chief Rosado was planning on appointing Thody as an Assistant Police Chief as he built his management team. Chief Rosado asked if I would be willing to meet with Jason Thody and discuss our differences and get things out in the open. We did, we met and after roughly three hours of talking and discussing our differences, I left with a very different  opinion of Jason Thody. Times change, people change.

I could understand what Thody  brought to the table and completely understood why Chief Rosado wanted Thody as part of his team. I also had a much better understanding as to what led up to some of the incidents I had been critical of Thody for in the past.

I don't intend to post everything we talked about, but as an example, the bar fight. Thody was very open to anything I asked about that incident and he fully took the blame for the incident. Thody explained he had been dealing with a death and essentially was going out with a couple buddies drinking to blow off steam. He readily admitted that it wasn't one of his best decisions to go to a bar in the same City he was a Police Officer to drink , and under the circumstances it didn't end well for Thody.

He became involved in an altercation which eventually involved HPD officer's responding, which led to an Internal Affairs Investigation and Thody's eventual demotion back to Sergeant from Lieutenant. But rather than play the blame game, Thody accepted his demotion and committed to rebuilding his reputation and once again move upward.. Thody eventually regained the title of Lieutenant and rose to the rank of Captain before retiring earlier this year.. A Lieutenant who has since also retired said that after the demotion, Thody was assigned under him and he stated that Thody was one of the best and hardest working Sergeant's he had the opportunity to work with..

Thody had apparently signed off on training forms  for Hartford Police Officers that attended classes at Hartford's Training  Academy. According to several sources familiar with the process, for years the Academy had processed these forms by "photo-copying" the instructors signature on the form and then duplicating for all attendees. Probably not the best process, more of a sloppy shortcut, but as far as I can tell there was no intent to defraud the system or claim training that was never taught and that allegation or any criminal conduct has not been made..

As soon as I received the original call from the "source", I began looking into the matter. I attempted to contact Hartford's Police Chief David Rosado. Chief Rosado was in Florida at a Police Chief's Conference and promised that he would look into the claim as soon as he returned. Chief Thody was also at the same conference and was scheduled to return a few days later..

Once Chief Rosado returned, he did advise me that the matter was being looked into and the process of "photocopying"  signatures on training forms would cease immediately.

Chief Thody also responded to my inquiries after he returned from the Florida trip and answered my questions regarding the matter. Apparently the issue arose during a HPD Union deposition regarding a Hartford Officer that was terminated after a recent DUI arrest, off duty in the Town of Plainville, in which the officer was on video using the "N" word several times during his arrest.

Although the DUI arrest and "N" word incident were recent, the issue of Thody and the photocopied incident dated back over 3 years. That was one of the things that raised the "red flags" for me and made me wonder why it was being brought up now as a single incident when the process had probably involved hundreds of HPD Officer's  and maybe thousands of training forms.

The more people I asked about the matter, the more I was told by numerous sources that the agenda behind the complaint was to discredit Thody and an attempt to open up an Assistant Chief slot for someone that others were lobbying for.

It is also unclear why this matter is arising at this point in time. Is it supposed to be a "gotcha " moment for the HPD Union and its attorneys to expose an alleged corrupt practice in a deposition in an attempt to jackpot an Assistant Chief or the bigger question, if the practice was so corrupt, why did it take three years for the HPD Union to bring it to  light? And wasn't Thody actually a Union member at the time (while still serving the rank of Captain) when the practice was in place, and weren't there numerous other HPD Union members assigned as instructors at the Academy photocopying their signatures on training forms? Shouldn't they be drawn into the complaint and the IAD investigation if all all things being equal?

Apparently the Connecticut Police Officers Standards and Training Council claimed that Hartford's practice was unacceptable and claimed to NBC Connecticut that the photocopying was not permissible.

QUOTE FROM THE NBC CONNECTICUT REPORT

Yet, despite the comment from POST's Executive Director mentioned in the NBC Connecticut report,, POST instructor's appear to deviate from that same policy by typing the instructors name on POST required training forms as documented and reviewed by "We the People" 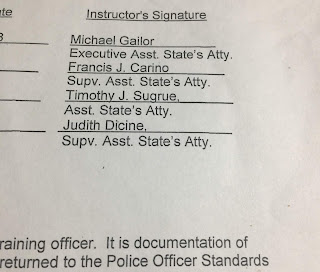 PORTION OF A COMPLETED POST FORM OBTAINED BY "WE THE PEOPLE"

YOU CAN VIEW THE NBC CONNECTICUT  REPORT HERE
https://www.nbcconnecticut.com/investigations/High-Ranking-Hartford-Police-Official-Subject-of-Internal-Affairs-Investigation-503357801.html

NEWS YOU WON'T SEE ON THE NEWS 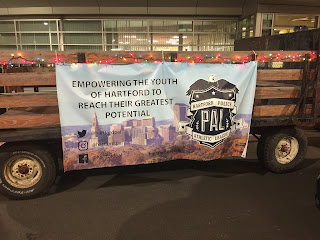 If only we could pair the good things happening in Hartford with the violence that seems to always attract the media.

I guess that probably sounds pretty sarcastic, but there are a lot of positive things going on that get no coverage, but the media trucks swarm when someone is shot or killed. 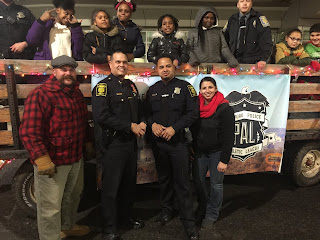 Last Thursday PAL held its Annual Holiday Party for the kids. It was a great event with probably well over one hundred youth attending.

The night included a tractor pulled hayride through downtown Hartford with Christmas Carols being sung by everyone and waves and greetings from the riders and people on the sidewalk alike, and drivers waving and beeping at the kids as they enjoyed a safe and respectful night hosted by HPD. 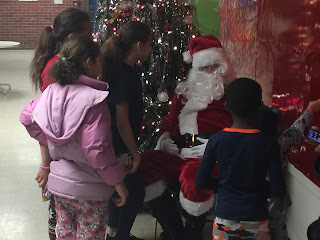 SANTA WITH THE PAL KIDS BEFORE THE HAYRIDE 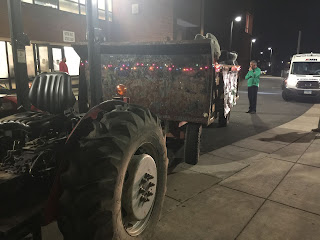