Some people run for political office to serve the public, others run to achieve their political goals and aspirations on the backs of the people they are supposed to serve.
Hartford Mayor Luke Bronin is the latter, or should I say "ladder" as in the next rung on his political ladder. I would fully expect the sense of entitlement and the arrogance of the Bronin's they see themselves in the White House someday (Hey, we all know now that crazy things can happen there)
The term "lying Luke" has started making the rounds on social media. I have been reluctant to start using it because I think we still have to show some respect for the Office, even if we don't respect the person in it. ( I am starting to sense a theme here).
But enough is enough, so lets talk about Lying Luke. Where do I begin. Let me start with Lying Lukes performance at HPD's Public Compstat Thursday night. In full campaign mode . Lying Luke stood up and professed his love and admiration for the men and women of the Hartford Police Department. I was waiting for someone who knew better to stand up and start handing out barf bags to everyone there who knew the truth..
This is the same Mayor who has allowed the numbers of Officers at HPD to drop to dangerously low levels. The same Mayor who refused to indemnify Hartford Police Officers sued over their good faith efforts in the performance of their duties. The same Mayor who has repeatedly refused the requests of Hartford's Police Chief for necessary promotions if Sergeants and Detectives, even just to keep pace with retirements and attrition.
And while I'm on the subject of crime, does anyone remember during the Mayoral campaign Lying Luke making the rounds to shooting victims and the families of Homicide victims with the TV cameras in tow? Did that sympathy end after the election or do we only show compassion when it means votes from the gullible?

I have my own issues with Lying Luke, but I won't rehash them all, but you can read it here.https://wethepeoplehartford.blogspot.com/2017/05/mayor-bronin-you-cant-handle-truth.html
Ok, now let me ask a couple more questions. In all seriousness, do you know where you live?  Do you know where you pay your car taxes? Have you ever had to lie about where you live or set up a phony job because you couldn't get a job anywhere else without lying about your place of residence?
Apparently that residency integrity is an issue with Lying Luke and the "good" people he has chosen to surround himself with.
It started with Hartford's, now former, Economic Development Director Sean Fitzpatrick. I first raised the question and began looking into his claims of residency, which eventually turned out to be bogus. Once Fitzpatrick realized the game was up he resigned before the Internal Audit Commission had the chance to fully expose his "alleged" fraud. You can read the full story here  https://wethepeoplehartford.blogspot.com/2017/12/hartfords-economic-development-and.html
How much time do you think Lying Luke spent socializing with his Economic Development Director sitting in Room 6 at the Town and County Club, the location Fitzpatrick claimed as his "residence". I would venture to say the Bronin's probably spent more time with the Fitzpatrick's at their Simsbury home than they did in Room 6.

I find it inconceivable that Lying Luke is unaware  as to where his key people actually live. Fitzpatrick is not the only questionable person  possibly perpetrating frauds on the taxpayers of Hartford.

Take for example Bronin's Chief of Staff , Chief Operating Officer and interim Finance Director and who knows what else, Thea Montanez. (Bronin isn't big on staff retention)
In September of 2016, Montanez signed the "affirmation of Residency " Form required by the City. Montanez signed the form that she was a Hartford resident and that her cars were registered, and therefore taxed in the City of Hartford. Apparently Montanez forgot to tell anyone else, including the Town of Bloomfield as well as the Hartford Tax Collector. As recently as July 29th , of 2017 Montanez was still paying her motor vehicle taxers in her town of residence, Bloomfield Connecticut, listed to her residence at 27 Norman Drive, Bloomfield, as evidence by the documents below.
And Montanez and Fitzpatrick aren't the only 2  allegedly engaging in the game of deception , I will be posting more documents and proof over the next couple days. It seems hard to comprehend that someone that wishes to be Governor would be so clueless as to what is going on around him or is it more likely that he was well aware and just condoned the frauds. Only Lying Luke will know, or just maybe we all will know eventually as more comes out.

UPDATE: I just received a call from Thea Montanez informing me that she was getting calls about this post. Thea claims it was a glitch with DMV that didn't transfer her taxes over from Bloomfield to Hartford. I informed her that I had been advised that she was in the Tax Office at City Hall Wednesday trying to change her taxes to Hartford, she admitted that was true and she also stated that she did pay her taxes in Bloomfield as I posted. I agree mistakes can happen and Thea has said she will send me confirming documents, Out of fairness, I will post those when I receive them. I also stated that she has been in City Hall for two years already and it is just being addressed now. While typing this I just received a text message showing that she has actually started paying her taxes in Hartford as of 1/11/2018 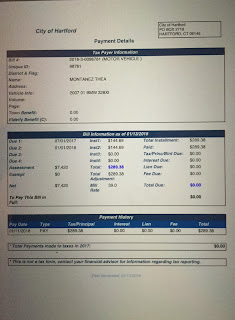 And so not to keep you in suspense, here is a hint as to who is next. 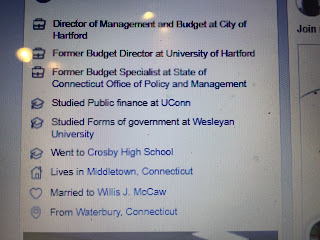 (you can delete things on Facebook, but the screen shots live on forever)
Montanez Affirmation of Residency Form by Kevin Brookman on Scribd

At least one Connecticut Mayor is doing the right thing. 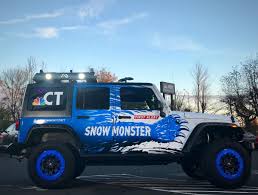 Ask your neighbors who has a dual pole doppler radar and you will probably get a blank stare.

Ask who has the Snow Monster and you will probably get a growl and "NBC Connecticut" yelled right back at you.

I don't think I can recall a marketing gimmick that has caught on as quickly or as strongly as the fur lined Snow Monster. Hopefully those 9 HD cameras never record the snow monster on its back.

I prefer accurate weather forecasts over blue fur lined seat covers, but if you can get both and attract a broad audience, that's a home run for the marketing people.

And I have always been partial to the cookie monster but the tricked out jeep will do, and I hear it likes visiting Birthday parties.

WHO IS BUYING LUKE

The first round of campaign filings for the Governor's race are in. It is an interesting list of donors for Hartford's mayor Luke Bronin.

Apparently Bronin will attempt to buy the Governor's Office the same as he did in purchasing the Mayor's Office in Hartford in 2016.

Not surprisingly, very little of Bronin's monetary support is coming from his Hartford constituents, but rather seems to be based in Fairfield County and out of State. Much of his donations are coming from New York City and as far west as San Francisco.

And on the Democratic side, if donations are any indication of viability, things look good for West Hartford's Jonathan Harris who has reportedly raised almost double Bronin's amount. Harris's campaign  reported  raising$232,745 to Bronin's $113,710. Even Susan Bysiewicz's low key exploratory run has out raised Bronin. "Friends of Susan" reported raising  at $140,745.

It makes me wonder where the checkbooks of those "hundred's of people" Luke claimed calling him urging him to get into the race are. 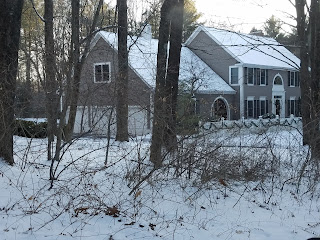 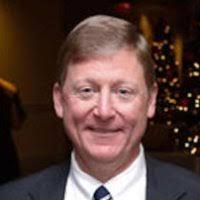 Sorry for that title, I just had to use it

The heat was apparently getting too much for Fitzpatrick as he, Mayor Bronin and Corporation Counsel Howard Rifkin all tried to cover for Fitzpatrick's phony residence at the Town and County Club at 22 Woodland Street.

Fitzpatrick , as a City Department head, was required to comply with the City's residency ordinance. Instead, Fitzpatrick decided , allegedly, to set up a fraudulent residence listed as the woman's social club.

This was first discovered and reported here on "We the People". This is most likely not the end of this story as I look into other issues with the phony address, such as voter registration fraud and civil penalties for falsely registering a motor vehicle with DMV.

And there are other Department heads perpetrating similar frauds on the taxpayers of Hartford.

I guess now I don't need to keep looking for the Fitzpatrick cars on Woodland Street at night, I haven't been able to find them at all yet anyway

TIME FOR SOME CHANGES

Ever since this blog became somewhat popular, I have realized that many of the visitors here don't necessarily come hear to red my writings, the comments also draw many people in.

I get that, and I appreciate it. Many times I get comments sent in saying "Please don't post this, but here is some information for you" and then I go to work trying to verify the info.

This weekend it seemed to reach the boiling point.

Many of the comments were directed and high ranking officers of HPD. It is particularly bothersome to see allegations against someone like Chief Rovella, who has served this City and HPD with dignity and distinction as Police Chief. I probably shouldn't even call them allegations but more like someone airing their sour grapes publicly and anonymously.

I always wonder if the people who air their differences anonymously here have taken the time to approach the other side like adult men and women do, and voice their concerns or opinions, Probably not.

I know the comments are a popular part of this bog, but the time has come to start to try to reign them in. I am not at the point of requiring a valid e-mail or some sort of sign in to register, but comments going forward must be pertinent to the topic they are posted under. If it is a posting about a gun buy back at HPD, comments about the Superintendent of schools or an associated tirade can be e-mailed to me, but they won't be randomly posted as anonymous comments.

Any other suggestions on moderating comments would be appreciated.

Thank you and keep reading
Posted by KEVIN BROOKMAN at 7:58 PM 8 comments: