I THINK IN SPANISH THE WORD IS "COJONES"

Does anyone know how we could find a set for our Council President Calixto Torres?

The larger question though is, how could anyone allow the body that they chair to continue to be made a mockery of by the Perez Administration. Time after time I leave the Council Chambers shaking my head wondering how Torres has any self respect left. He continues to dance at the end of the marionette strings that Perez is pulling making Torres do the Perez shuffle. Although I could write all night(and probably all day tomorrow) about incidents where Torres seems like the captain of the Titanic headed full speed ahead toward an iceberg because Eddie told him to, the most recent incident happened this week.

As Councilman Segarra and others have been warning about our impending budget disaster, the Perez administration continues to stonewall the release of information requested by the Council's budget committee. Apparently the Perez Administration has even gone so far as to forbid department heads from attending Budget Committee meetings and answering questions regarding city finances. Rather than Torres stand up as Council President and insist that the information be provided as required by Charter, he rolls over and defends these actions by Perez. I'm not sure if Torres understands his position and responsibilities, or does he see himself as a member of the Mayor's staff and beholding to the man that handpicked him to be his puppet. How could anyone with any self respect chair a meeting where the debate focused on whether a public body (the Hartford Court of Common Council) should have the power to issue subpoenas to compel the Mayor to provide budget information. Does anyone get that these are public documents and should be provided to anyone upon request, ESPECIALLY COUNCILPEOPLE IN THE PERFORMANCE OF THEIR DUTIES. It would seem that at the very least any department head that refuses to work with the council is treading on insubordination charges at the very least. I'm sure John Rose will issue another one of his off the wall opinions, once again forcing many to wonder if he really does have a law degree, stating that Perez can do anything he wants and the Charter means nothing. And I'm sure that Rose, in his typical stance regarding transparency of government, will withhold any public document that he feels will embarass Perez and his botched administration, because he can't allow these documents to be used as weapons against a corrupt administration. And in the true spirit of fiscally responsible spending, Rose will commit to appealing any FOI Commission decisions aginst Perez, no matter what the cost, because it is not their money.

How many times will Torres allow his buddy Perez to publicly make a fool out of him before he says enough is enough and steps up to do what the people of this city elected him to do? There have already been more than enough moves by Perez to show his total lack of regard for the Hartford City Charter, unless of course the wording of the Charter benefits him. Remember when he lectured Clarence Corbin about ethics? Just the fact that the Mayor's Chief of Staff stood before Torres and others during the recent budget hearings and publicly stated that the Mayor's Office considered the Council's resolutions merely advisory and not really binding, speaks volumes. Those comments would have sent anyone with a backbone into orbit, as it did to Concilman Segarra, but not Calixto Torres. That was just Perez being Perez and Calixto has agreed to take it as part of their unholy union.

How bankrupt can a person be in their self esteem account before they decide to stop allowing themselves to be made a joke of ? When does one decide that their reputation and image are more important than continuing to dance at the end of the strings of the corrupt puppeteer? I'm not a betting person, but I think Calixto Torres might just be on the streets long after the corrupt puppeteer has gone packing. Hopefully when he passes his former constituents on the streets, the comments might be "that's Calixto Torres, he waited a long time, but in the end he did the right thing". I know, we can dream, can't we?
Posted by KEVIN BROOKMAN at 9:39 PM 1 comment: 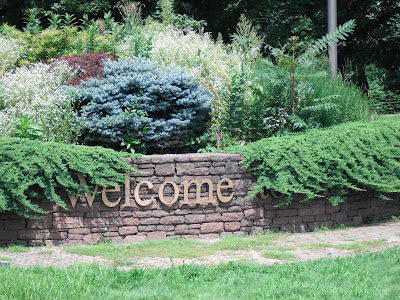 We are all most likely well aware of the poor condition of Hartford's parks and public spaces due to layoff's of Public Works staff. But you have to wonder what people getting off of I-91 at Pulaski Circle in Hartford think of their first impression of Hartford. In the center of the traffic circle is a planter that was originally donated to the city by the Greater Hartford Jaycee's. Unfortunately, maintenance of the island is the City of Hartford's responsibility, and they seem to have forgotten about it. It would seem that numerous city officials drive by this spot everyday and apparently ignore its condition.

These traffic islands as you enter the city at different points are the first
impression that many visitor's have of our city, and it must make you wonder what they think of Hartford if we can't even maintain our "welcome mats".

For several years I have been trying to get the city to start an "adopt-a-spot" program , similar to those most of our suburban neighbors have where a group or organization would volunteer to maintain areas that the city obviously can't or won't. The island I have pictured here I have weeded for the past 5 years prior to this summer. This year I decided not to since we are laying off city laborers while increasing the Mayor's staff with $100,000 plus a year jobs.
Posted by KEVIN BROOKMAN at 5:59 PM No comments:

ANOTHER F.O.I. LOSS FOR THE "TRANSPARENT" PEREZ ADMINISTRATION

After receiving several calls from people questioning the frequent purchases of food and beverages by Superintendent of Schools Stephen Adamowski on his City of Hartford credit card, and the continuing word that the City of Hartford pays for Adamowski's aprtment at Hartford 21, I submitted an FOI request to the office of Adamowski at the Board of Education. The request was for "any employment contracts or employment agreements","housing and or agreements regarding any living expenses covered by the City of Hartford and/or the Hartford Board of Education" as well as "any documentation regarding use of any City credit cards and/or expense reports or requests for reimbursement submitted to the City of Hartford and/or the Hartford Board of Education." On March 20, 2009 I received a fax from the Board of Education containing a six page employment agreement and a one page summary of Adamowski's city credit card with one line of detail showing the total charged year to date. The employment agreement clearly referenced other documents and supplemental agreements, which were not provided as outlined in the request. Also, since I had previously received detailed documents outlining Adamowski's credit card use from other sources, I knew that the item they had provided was far from what was available as a public document.

Based on my belief that the Board of Education and the City were being far from open and transparent, I filed a complaint with the Freedom of Information Commission. The hearing was scheduled for Monday, July 27, 2009. On Friday, July 24, 2009, less than one business day before the hearing, the City of Hartford's Corporation Counsel's office apparently suddenly saw the light and provided me with what they claim was all of the requested Credit Card information I was looking for. Attorney Melinda Kaufmann from John Rose's office assumed that since they had provided the documents I would now withdraw my complaint. My response to her was "absolutely not", that a delay of several months in providing the documents was unacceptable, and I intended to proceed with the hearing and let the FOI Commission decide if the City's actions were proper and lawful. Apparently the FOI Commission agreed with me and on August 6, 2009 issued a proposed Final Decision, the details of which are below in the PDF Document, and in a rare move by the Commission, a fine is recommended against Jill Cutler Hodgman, the person that the Commission determined was the one responsible and in the care and control of the documents and is the official directly responsible for the denial of my FOI rights (line 49 in attached decision). The decision further goes on to describe the unusual civil penalty "would have a deterrent effect... should Ms. Cutler Hodgman and the other respondents believe that their actions to stonewall the provision of public records can be entirely cured by a last minute offer of documents days before an FOI Commission hearing and that no adverse consequences will flow from that action" (line 50 in FOI proposed Final Decision)

Unfortunately, rather than pay the fines, John Rose and his followers will probably run true to form and appeal this decision , costing the taxpayers another $100,000 as they have done with their court appeals of FOI Complaints brought by Jeff Cohen and the Hartford Courant. They just don't get it, maybe they might want to take an FOI training course offered free by Tom Hennick of the FOI Commission.

And the question still hasn't been answered as to who pay's for Adamowski's apartment in Hartford 21.