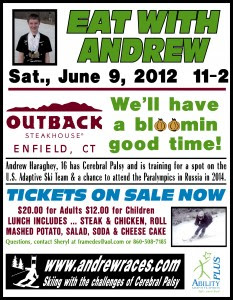 I have posted previously about my nephew Andrew who is in training to hopefully compete in the 2014 Paralympics in Russia. Andrew has become a competitive skier despite having Cerebral Palsy. You can read more about his efforts at his website, andrew races.com
His first fundraiser for the upcoming ski season will be held tomorrow at the Outback Steakhouse in Enfield, CT. Details are in the flyer above
Posted by KEVIN BROOKMAN at 4:48 PM 1 comment:

REACHING MY BOILING POINT...OR...HOW MUCH MORE CORRUPT CAN HARTFORD GET?

I think I am pretty even tempered and it takes a lot to get me close to my boiling point, but I know I came close to that point two Thursdays ago when it comes to Hartford's political scene. A close friend of mine that has a whole list of unusual sayings and one of them is that when it comes to politics, "if you stand in the middle of the road, you are going to get run over". Two many people in Hartford's political scene are standing in the middle of the road afraid to cross over to the right side.


The biggest thing that offended me about Hartford politics at Hartford's Democratic Town Convention was the deal making for the endorsed candidate of Registrar of Voters. It is no secret at this point to anyone that Ramon Arroyo, husband of 3rd District State Representative Minnie Gonzalez, was arrested when he was a City of Hartford employee for allegedly soliciting a prostitute. That in and of itself might be bad enough, but he also did it on City time and from what police sources had told me, in a City of Hartford vehicle.


The "prostitute" he attempted to pick up was actually an undercover Hartford Police officer.

Everyone wants to talk about second chances as they try to validate their support of Arroyo , even when knowing his history. It really isn't about second chances though and has nothing to do with "redemption" What it is about is the deal making and the "back scratching" that has gone on for years as political patronage and payback.

Many of those that talked about "redemption" and "second chances" seemed to have a warped view of the theory though. Several of the people that tried to explain their choice apparently have different criteria for who receives the "second chance" and "redemption. I asked many of them if they would want a school teacher who was out soliciting prostitutes teaching their children in school. A resounding "NO" was the general answer.

I also asked if they would think it was right to hire a police officer that had been charged with soliciting prostitutes.Again, the answer was a resounding "NO". I guess the redemption theory only applies when there is a political "quid pro quo".

Now another saga of corruption that has been ongoing for far too long, the Hector Robles arrest. Robles was terminated as a Hartford Police officer in 2010 after he apparently admitted in a statement to Internal Affair's investigators that he was "padding" his hours and was eventually charged with felony charges for stealing from the City.


Robles faced re-nomination to his position as the 6th District State Representative at the time the arrest was imminent, yet he told his town committee members that the matter was purely "administrative" . Both Robles and myself knew that was an outright lie as he misled the 6th District Town Committee in order to gain their support.


Now here we go again. Two years later, Robles is once again up for re-nomination to the 6th District Rep seat. He once again sat before the 6th District Town Committee and fought for his political survival by telling them that all of the charges were going to be dismissed. He further stated that he would be getting his job as a police officer back as well as all back pay.


Again, that appears to have been a lie. As recently as last week several sources reported to me receiving calls from Inspector's from the Office of the Chief States Attorney's regarding potential evidence in the Robles case. Sources familiar with the case have told me that the case against Robles is stronger now than the day he was arrested. Another aspect of the case, which may prove to eventually be the State's "trump card" hasn't even been played yet.


It seems as though Robles is playing loose with the truth when it comes to telling town committee members what they want to hear. Regardless, the 6th District endorsed  Robles's challenger, Ed Vargas.  Apparently many of Hartford's politicos don't seem to be offended by being lied to, as several Democratic operatives are still following Robles and supporting him like the rats behind the Pied piper.


Now lets look to one district to the north of Robles. The 4th District State Representative seat is held by corrupt former Mayor Eddie Perez's bag man Kelvin Roldan. Roldan survived a challenge by a felon two years ago by a handful of votes. This year he did not receive the endorsement  which was given to community activist Angel Arce.


Roldan began his stint in the 4th by what many perceive was a deal cut between the former State Representative Evelyn Mantilla and the felonious Eddie Perez. Mantilla stepped aside, Roldan was able to run and Mantilla landed as a paid consultant for Perez at City Hall. Her "paid consultant" position eventually evolved into a paid staff position in Perez's office and prior to Perez's downfall and conviction, Mantilla was moved into a civil service position in the Health Department to protect her and was then moved to MHIS, the City's "IT" department.


Ask most people in MHIS or the Health Department what Mantilla does, and the answer will most likely be  "Evelyn who?".


The audacity and entitlement of Roldan continues though. Recently during the challenge from another slate for the overthrow of the incumbent 4th District Town Committee, Roldan and others claimed that one challenger, Jose Contreras, a Hartford Police Officer, did not reside in the 4th District. That was interesting since it is common knowledge that Roldan is alleged to suffer from the "Bill diBella Syndrome". For those not familiar with that malady, it is where you claim to live in one location by keeping your name on a mailbox while actually residing somewhere else.


I feel very comfortable saying this based on the amount of mail falling out of Roldan's mailbox on Broad Street, his alleged residence. The fact that his neighbors have no idea who he is and one more  very interesting coincidence.


I was recently at an event and had a conversation with a man from West Hartford. We began talking and he related to me how he was able to walk to the event. He said he lived across from Hartford's Mayor on the West Hartford side of Prospect Avenue. I asked if he lived in the Condos' there and he said yes. I asked if that was where the Halloran's live. (Kaitlyn Halloran is Roldan's fiancee) I knew that was where Roldan was rumored to be laying his head at night for at least the part year.


I didn't even have to pull the information out of him. He readily volunteered that "oh yes, Kaitlyn lives there with Kelvin Roldan. He parks his car next to mine in the garage every night". It doesn't get much clearer than that. Needless to say, Roldan was none too happy when I confronted him the night of the convention with this information. How do you ignore the rules so blatantly. If you want to represent a district, then live in the district at the very least.


But when do the rules ever matter, it is Hartford politics. Is this the future of Hartford or will people finally choose a side. Do we enjoy being run over by corrupt politics?
Posted by KEVIN BROOKMAN at 7:49 PM 16 comments:

More on this later
Posted by KEVIN BROOKMAN at 7:04 PM 5 comments: