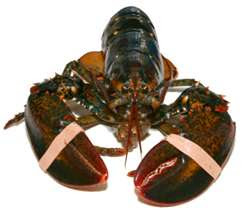 HPD sources have confirmed that a veteran HPD Officer is finding herself in hot water over alleged theft of lobsters and other seafood from the New Park Avenue Stop and Shop. Officer Natoya Guthrie is apparently being investigated for the theft of the lobsters while using the self checkout line recently at the store.

The incident was apparently observed by Store security personnel and referred to a Hartford Police Officer that was working a private job as part of the store's security efforts. Sources have also confirmed that it is believed that this was not the first time Guthrie used the scheme at the self checkout register.

A review of Guthrie's shopping records and  Stop and Shop customer card and related seafood purchases caused Stop and Shop to review other video that apparently uncovered other instances. The Hartford Police Internal Affairs Division is working hard to crack the case. In the meantime Officer Guthrie may be transferred to the HPD Marine Unit Dive Team to acquire her seafood direct from the sea
Posted by KEVIN BROOKMAN at 6:05 PM 142 comments:

Sources tonight are confirming the arrest of another Hartford Firefighter by Law enforcement officials in Rhode Island. Firefighter Rory Wentworth of Engine 11 on Sisson Avenue was apparently arrested after assaulting another Hartford firefighter Patrick Phelan of Engine 8 on Park Street. Sources have confirmed that Wentworth was arrested on felony assault charges after causing serious injuries to Phelan during the assault. No further details are available at this point or on Wentworth's status with the Hartford Fire Department. Hartford Firefighter Rafael Diaz who was arrested on numerous drug charges on August 2, 2012, was also in Court yesterday and his case was continued to October 3, 2012. You can read more on Diaz here Unfortunately thi behavior is not limited to the Fire department. Sources have also confirmed that two Hartford Police officers are facing possible ciminal actiom related to their behavior. One for possible larceny Charges and another for mishandling of evidence. More on those two cases as information develops.
Posted by KEVIN BROOKMAN at 11:55 PM 16 comments:

Is history about to repeat itself in Hartford. Is it time for another grand Jury to look at Hartford's development deals being cooked up at City Hall. The answer might quite possibly be yes.

While the appeal is still in the works for former Mayor Eddie Perez's conviction on corruption charges, another land deal is starting to raise some eyebrow's . We  may just be looking at our next "Butt Ugly Building" in the making.

It didn't seem to make sense that the City would place obstacles in the way of the land purchase, considering that the Police Credit Union would be purchasing essentially an abandoned property, investing several hundred thousand dollars in its rehab and returning a non producing asset to the City' tax rolls.

But eventually the pieces of the puzzle began to fall into place as people came forward with information. It seems that Hartford's COO David Panagore had come up with a plan to physically move the Credit Union building to a property at 1391 Main Street. According to sources, Panagore had told them that there was "federal" money available for the move. That has since proven not to be the case and there is no money to move the building  unless funded by Hartford's Taxpayer's.

Now the million dollar question, actually make that the half a million dollar question, $500,000 to be exact. Why the need to move the property? Well that becomes somewhat clearer as you dig down deeper to find out who all the players in the deal are. It may be a coincidence, but since I have begun digging into this and obtaining documents, at least two of the key players are no longer City of Hartford employees, David Panagore has submitted his resignation and Roger O'Brien was officially terminated today after a 7 day suspension.

After tracking down the ownership, it still is not clear who the actual owner is, but t appears that it is a Texas Corporation represented by Hartford Attorney, political operative and former Councilman John Kennelly. TLC Properties INC is listed by Dun and Bradstreet as both a Louisiana Corporation formed in August of 1996 and a Texas Corporation also formed in August of 1996. The president and CEO is Kevin P.Reilly. Reilly is also listed on numerous filings as the President and CEO of Lamar Advertising.
According to the City of Hartford's Assessor's Office the Fair market value of the property is listed at $164,700 with an annual assessment of $115,290 . The land value according to the Assessor is $53,060.

On June 22,2012 the License and Inspection Department of the City of Hartford served the property owners and their Attorney John B. Kennelly with a "Order to Abate" which essentially meant they condemned the property, claiming that the building "is in imminent danger of failure" The billboard above the property, owned by Lamar Advertising, was immediately removed .

On June 20, 2012, Kennelly apparently applied for a demolition permit to tear the building down. That has not been completed as of this date, but a demolition contractor from Milford is listed on the permit application.

Now the interesting part. Several sources at City Hall have called telling me that there is an offer being prepared by the City to purchase the property for $500,000. A property that has been condemned and a property that the assessor says the land is assessed at $53,060 may now be purchased by the City for ten times that value. The big question is why. Is this another deal like the Butt Ugly Building where Mayor Perez was quoted in Grand Jury testimony as saying"we need to take care of Abe". referring to politico Abe Giles. Should we now list another political operatives name who needs to be "taken care" of at the taxpayers expense?

And for what, to move an abandoned building that sits perfectly fine on the lot it was built on . And a property that the HPD Credit Union was more than willing to purchase at $170,000 with no additional expenses to the taxpayers of Hartford?

As a loophole to gathering information, pending real estate transactions and negotiations are exempt from disclosure under Freedom Of Information statutes in Connecticut. So none of this would be public until after the taxpayers cut a check.

Requests for comment from TLC Properties and Lamar Advertising were not returned. Attorney Kennelly did return a voicemail message stating that he was busy.
1391 Main Assessor Record 1391 Main Condemnation Order
Posted by KEVIN BROOKMAN at 10:25 PM 14 comments:

OLGA IS NOT HAPPY 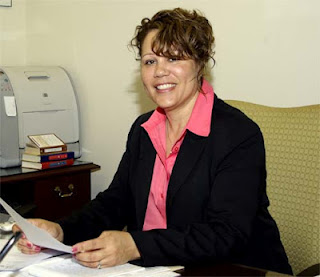 Apparently James Spallone from the Secretary of the States Office sent an e-mail to every election official in the State with information regarding an audit of election results to be conducted in the Secretary's Office tomorrow. The e-mail appeared to have probably well over a thousand e-mail addresses that it was sent to.The text of that e-mail is below

I wrote last week to inform you that we have scheduled the post-election audit for Thursday, August 30, 2012 at 11 a.m. in our Capitol office.  Unfortunately, we just discovered that due to a technological glitch, many of you did not receive that message.  I apologize for that.

Some of you may have heard that one of the candidates from the 5th Assembly District (including parts of Hartford and Windsor) has filed a complaint in Superior Court regarding the results of that district's Democratic primary.  Below is a link to an article from the Hartford Courant about the case, and attached is a copy of the complaint and summons.

Well, apparently Hartford's Democratic Registrar Olga Vazquez was not happy that her incompetence was once again being highlighted to her peers and she took offense to the e-mail. Vazquez's reply to Spallone is below :

Please, explain; what is the OBJECTIVE to your email addressed to all Election Officials in reference to McGee lawsuit. I can clearly see
Your objective and explaining due to a technological glitch I get, but I do not get it when you forward such email to all Election Administrators and only reference McGee vs. Vazquez.

I do not agree with your objective however; I also believe that because I am not the only Registrar named in this Summons.

I do not agree that the two matters should have not been combined.

Olga, this is what is known in the real world as transparency. If the e-mail keeps another city or town from having to incur the legal expenses that your incompetence will cost the taxpayers of Hartford, I strongly approve of Mr. Spallone's actions. And I think the reason he only mentioned McGee vs Vazquez is because no other district is being sued for losing ballots the Hartford/Windosr lawsuit is uinique to this primary cycle. The Bridgeport people must have taken some training for this election to keep themselves out of the news. Maybe Hartford should try that.

CHIEF ROVELLA ON "WE THE PEOPLE"

Chief Rovella was our guest on the "We The People " Program Monday on Hartford Public Access. the complete program is posted here.

And I apologize for some of the rough audio, there is no money put into equipment or maintenance at Hartford Public Access Television
Posted by KEVIN BROOKMAN at 12:37 PM 1 comment:

LAWSUIT TO BE FILED TUESDAY IN 5TH DISTRICT HOUSE RACE

Numerous sources are telling me that lawsuit will be filed tomorrow in Hartford Superior Court challenging the results in the race for the open seat in the re-aligned 5th District legislative seat. Candidate Brandon McGee will be filing the suit in an attempt to overturn the results.McGee's suit is based upon two missing ballots that apparently were not counted.

At least one ballot was missing from the JFK School polling place in Windsor and one missing absentee ballot in Hartford. The Hartford ballot was an absentee ballot and although there are 79 envelopes counted from the submitted ballots, only 78 ballots can be accounted for.

Once the suit is filed I will post it here.

This will be interesting as it moves forward, but even more importantly it raises the question of how the Democratic  Registrar of voters will attempt to justify a missing absentee ballot. Once again the taxpayers of Hartford will have to foot the legal bills for defending an office that appears to be the epitome of incompetence. Actually, let me rephrase that question, should the taxpayers have to pay when this appears to be beyond negligent or should the Registrar be on their own for the defense
Posted by KEVIN BROOKMAN at 8:22 PM 1 comment: