MORE FROM HPD: A BUSY DAY, OR MORE LIKELY A TYPICAL DAY, PLENTY OF ACTIVITY 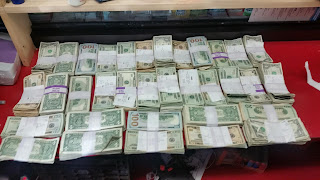 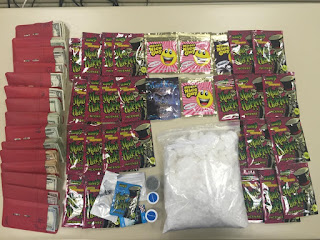 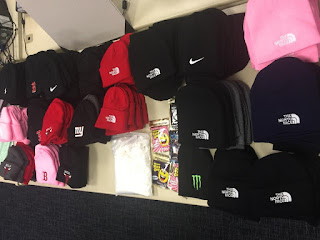 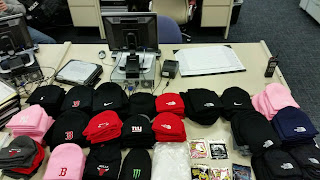 I guess there is good money in counterfeit knock-offs  and hallucinogenic bath salts. HPD  seizure  above and confiscated  cash from the suspected illegal activity at City Gas

On January 13, 2016 Detectives from the Hartford Police Department Vice and Narcotics Unit in conjunction with Agents from the State of Connecticut Department of Revenue Service executed two search and seizure warrants/ arrest warrants at two “City Gas” Stations (1510 Albany Avenue and 10 White Street). HPD Vice and Narcotics detectives had 2 search warrants for Intellectual Property violations, while the State of Connecticut Department of Revenue Services had several arrest warrants for individuals associated with the businesses. During the execution of these warrants several pieces of counterfeit clothing were seized. Detectives were able to recover a large amount of synthetic marijuana and bath salts which were located hidden in the ceiling tiles of the business. The Agents were able to seize a large amount of untaxed cigarettes. Three individuals working at the businesses were arrested by Hartford Police as well as by the Connecticut Department of Revenue Services agents. 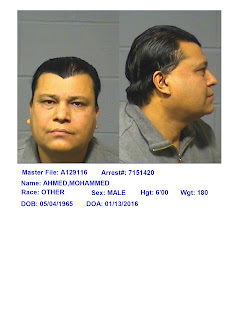 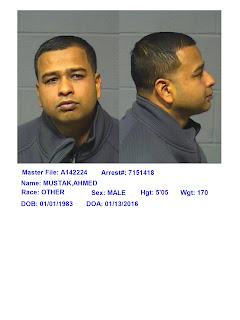 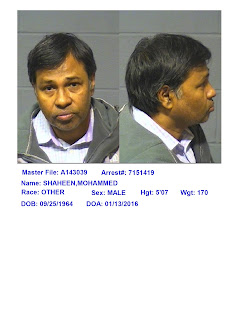 Note: After the operation, the business was closed down and the doors were locked and secured. However, after police left the vicinity, the building was burglarized by forced entry. This burglary investigation is ongoing by HPD North District.
Posted by KEVIN BROOKMAN at 7:13 PM 24 comments:

FROM HPD; ANOTHER GUN OFF THE STREETS

On Wednesday, January 13, 2016, at 1101 hours, Patrol Officers were dispatched to 52 Stonington Street in response to a report of a domestic dispute involving a threat involving a firearm. Upon arrival, Patrol Officers encountered the suspect Vehicle (a 2006 Honda Civic, 2 door, black, CT AB43940) leaving the property at a high rate of speed.

An Officer signaled the operator to stop but the operator did not comply and engaged the Officer in a pursuit. The suspect vehicle eventually entered Interstate 91 South at a high rate of speed. The pursuit was eventually terminated.
A passing motorist later advised Police that an item was thrown from the suspect vehicle on Interstate 91 North near exit 27. A blanket, rifle, and safe were located. The victim reported the suspect (her brother) demanded to know where his firearm was, left and returned stating, "I'm gonna kill you." "Where's my shit?" as he pointed a silver firearm to her head. The suspect entered the passenger front door of the suspect vehicle and left the property.
Posted by KEVIN BROOKMAN at 6:57 PM 3 comments:

FROM HPD; CLEANING UP "NEEDLE PARK" AKA SOUTH GREEN PARK

On January 12, 2015, at 10:00 a.m., Detectives from the Hartford Police Department's Vice and Narcotics Unit, along with members of the South Conditions Unit conducted an undercover narcotics operation in the area of South Green Park and 33 Park Street.  This operation was conducted in response to numerous citizen complaints regarding open air street level narcotic sales in the Park.  Undercover Detectives conducted surveillance in the area and were able to identify prospective buyers and sellers of narcotics.  A total of (16) individuals, from in and around the Hartford region, were arrested and charged with various narcotics charges.
Evidence:
Two ounces of Marijuana
60 bags of Heroin
15 grams of Crack Cocaine
Nine Suboxone
U.S. currency $441.00

DID WE REALLY NEED BLACK DIAMOND AND THE FBI TO FIGURE OUT DILLON STADIUM?

In digging through the Internet today, I found the following website.

It  was created by a Hartford School  Student as a class project. He analyzes the use of Dillon Stadium and defines his proposed solutions to making the field viable once again,  probably for far less than the  millions already spent for virtually nothing, no benefit, no improvements .

The student, Shawn Lozada has posted his work on line and it can be viewed at http://missiontorestoredillon.weebly.com/final-reflection.html. Click on the various tabs at the top of the report to read all of his work

It is also interesting to note that Lozada lists his mentor as Roger Pearl, a retired Hartford Police Officer

Please take a few minutes to review is work, I think you will find it impressive.

Also, there will be a community meeting tonight at 6:00pm at the Hartford Public Library for a Community discussion of the future of Dillon Stadium
Posted by KEVIN BROOKMAN at 12:12 PM 1 comment:

Brooklyn-based author Neil deMause, whose book "Field of Schemes: How the Great Stadium Swindle Turns Public Money Into Private Profit" and is the bible on the that subject, will be the special guest (by phone) on WTIC 1080 radio at 3 p.m. TODAY. He'll be talking about our Yard Goats saga. His blog is www.fieldofschemes.com, and he's been covering Hartford's problems there for more than a year

I have not rad his blog or the book, but this might be worthwhile to check out
Posted by KEVIN BROOKMAN at 11:23 AM 9 comments:

The agenda is as follows:

SIXTO'S VERSION OF THE COUNCIL'S ACTIONS

There were 19 items on the original agenda.  No additional items were added to the agenda during the meeting.  The City’s official listing of actions taken on all items on this agenda can be found online at http://www.hartford.gov/townclerk/council-minutes .  The next regular Council meeting will be held on Monday, January 25 at 7 P.M. The next regular public hearing will be Tuesday, January 19 at 7 PM (change in day due to Martin Luther King Holiday.  All meetings are in the Council Chambers.

– The Council passed a resolution approving the sale of City-owned vacant, wooded land at 34 and to the CT Department of Transportation for a price of $323,000.  The CT Transit Bus Facility is located on adjacent land at and the acquired parcels will be used to expand the surface parking lot at the facility. (Bronin) (Item #6)

Registrars of Voters – The Council postponed indefinitely an ordinance which would change the selection process for Registrars of Voters.  Currently, Registrars of Voters are elected every four years.  The ordinance provides that, beginning in 2016, the Court of Common Council would appoint a registrar for each major party, as defined by State law. Currently, the two major parties are Democrat and Republican.  Prior to such appointments, the Council would solicit applications and hold public interviews of at least 5 of the individuals who have submitted qualifying applications.  Registrars would serve four year terms beginning in January of 2017. (Wooden) (Item #10)

Appropriations – The Council postponed indefinitely an ordinance which would make three appropriations totaling $1.3 million from surplus funds generated in the fiscal year that ended June 30, 2015.  The estimate of the FY15 surplus is about $7.3 million.  The three proposed appropriations are 1) $497,000 to the Police Department for purchase of Shotspotter equipment, which pinpoints the location of gunfire in real time to allow officers to respond quickly to incidents, 2) $300,000 to the Capitol Region Education Council (CREC) for implementation of the Public Safety Initiative which works with young people to introduce them to public safety careers with the goal of increasing the number of Hartford residents in such jobs, and 3) $300,000 to the Department of Families, Children, Youth & Recreation to increase the number of young people participating in the Youth Employment Program. (Segarra) (Item #11)

Today I attended my first Stroke Survivor Support Group at Mt. Sinai Rehab Hospital. The meetings are held every month, and I would encourage all of you to NOT become members. It is a great group of people, but the initiation process is pretty rigorous.

Mt Sinai has some great resources for those of us that have joined the club. Their Doctors and Physical therapists and I probably wouldn't be walking today if wasn't for their efforts.

Today's meeting was facilitated by Doctor Thomas Miller, a Rehabilitation Doctor at Mt. Sinai. He passed out a handout about a program from the American Heart Association about a program called
"Life's Simple 7"

I think it is a program that would be beneficial to everyone and I thought I would share it here. The program details 7 basic steps to reduce death from cardiovascular disease and stroke by hopefully 20% by the year 2020.

The first meeting of the newly elected City Council will be preceded by the monthly Public Comment session at 6:00PM a, anyone can speak at that point providing you sign up prior to the meeting

There are 19 items on the agenda. Below is detailed information about items of special interest to neighborhoods.  Following those details is a listing of all agenda items, in layperson’s language.  The official agenda for the Council meeting is available online by clicking on the meeting date at the following web site: http://www.hartford.gov/townclerk/council-agenda .

New Agenda Items:  The following item appears for the first time on the Council’s Agenda.

Council Rules – The Council will vote on its 2016-2020 Rules.  Changes to Council Rules previously in effect are limited to the establishment of Standing Committees and the schedule of their regular monthly meetings. Committees are listed below.

Previously Submitted Items:  The following items were previously on the Council Agenda.  They were referred to committee and/or to public hearing and are now on the agenda again for action.

– The Council will consider a resolution approving the sale of City-owned vacant, wooded land at 34 and to the CT Department of Transportation for a price of $323,000.  The CT Transit Bus Facility is located on adjacent land at and the acquired parcels will be used to expand the surface parking lot at the facility. (Bronin) (Note: This item was not acted upon by the previous Council by the end of its term.  It has been resubmitted.) (Item #6)

Appropriations – The Council will consider an ordinance which makes three appropriations totaling $1.3 million from surplus funds generated in the fiscal year that ended June 30, 2015.  The estimate of the FY15 surplus is about $7.3 million.  The three appropriations are 1) $497,000 to the Police Department for purchase of Shotspotter equipment, which pinpoints the location of gunfire in real time to allow officers to respond quickly to incidents, 2) $300,000 to the Capitol Region Education Council (CREC) for implementation of the Public Safety Initiative which works with young people to introduce them to public safety careers with the goal of increasing the number of Hartford residents in such jobs, and 3) $300,000 to the Department of Families, Children, Youth & Recreation to increase the number of young people participating in the Youth Employment Program. (Segarra) (Item #11)