FROM DEPUTY CHIEF BRIAN FOLEY:
At the Hartford Police Department, we feel that the most critical time for us to communicate with our community and the media is during the immediate hours after a police involved shooting. Last night we again provided an on-scene media briefing and also communicated with key community members approximately an hour after the incident. The following is an update to that information:


Last night The Hartford Police Department (HPD) was contacted by the South Windsor Police Department regarding an Emotionally Disturbed Person (E.D.P.) who had just left his mother’s house in South Windsor. According to his mother, when her son (Christopher Reh, W/M/28 of Enfield CT)  left the house he was depressed,  previously suicidal, had a knife, and made verbal statements to her that he was going to “stab police officers”. The mother told police that Reh has previously tried to kill himself with self-inflicted slashing wounds.


As HPD officers approached his vehicle, Reh rammed three police cruisers, and also struck a uniformed Hartford police officer who was approaching on foot.  The officer (Andrew Nelson Jr. 3yrs at HPD) was struck and knocked to the ground. At this time Officer Nelson had fired his gun at the Reh multiple times. Reh was struck twice in the Right arm. A “10-0, Officer Down, Shots Fired” call was made by on-scene officers.


Reh then drove a short distance and crashed into a building at 577 Park St. Reh was taken to St. Francis Hospital with non-life threatening injuries. Medical staff listed him in stable condition with 2 gunshot wounds to the right arm.


Officer Nelson was taken to Hartford Hospital. Medical staff listed him in stable condition with a minor head injury, he was treated and released.


A second officer was also taken to Hartford Hospital for minor injury and evaluation. He had been operating his HPD cruiser when Reh rammed his vehicle head-on. He was also treated and released.


We continue to work cooperatively with the CT States Attorney’s Office through the investigation. This morning, Hartford Police Department Major Crimes Detectives obtained an arrest warrant for Christopher Reh. He is charged with Criminal Attempt to Commit Murder, 2 counts of Assault on Police, Reckless Driving, Operating a MV with Suspended License and Evading Responsibility. The warrant has a $1,000,000 bond. Reh is at St. Francis Hospital receiving treatment for his injuries. He is in HPD custody at the hospital awaiting his release and arrest.


The investigation of the complete incident is ongoing. As per protocol with the Connecticut States Attorney’s Office, the shooting is being investigated by an outside police agency. As with all HPD police involved shootings, there is also an internal investigation and review.
Posted by KEVIN BROOKMAN at 6:33 PM 13 comments:

A GUEST POSTING: THE POSITIVE SIDE OF OUR HARTFORD

There are good things going on across our City. The following e-mail  I received today is just one example. If you  hear of  something positive going on, let me know, maybe it  will be posted here

Friends,
I write to you about a story of "community" here in Hartford.
It started with Kevin Brookman when I returned home and picked up my cellphone, I saw one of my missed calls was from him.  I texted and he called right back asking if I had heard about my friends' building, City Fare on Franklin Avenue -- it was on fire.  I thanked him profusely for caring to reach out and immediately left home again with such a heavy heart.  I love that building with its warm and inviting interior and old-fashioned side doors by which I used to let myself into the old kitchen.  Admittedly, as I was racing down to the scene, I was cursing Fran Reale (in heaven!) under my breath and asking how she could let this happen??!  When I arrived, I saw the Hartford Fire Department trying to preserve what remains of this charming building and City Fare business.  It is an experience I will NEVER forget and one that I hope others never have. Current building owners Phyllis Reale and Teresa Preziosi were SO incredibly brave and hopeful throughout that their kitchen and building may be saved so they could one day operate there again.

It really was something to watch firefighters try to put out stubborn flames and smoke, in the pouring rain no less.  But Lt. Mario Oquendo was there because Special Services got involved and of course, who else came onto the scene and was incredibly helpful but State Rep Angel Arce.  We all see Mario and Angel at monthly MARG meetings, but it was so impressive to see them both in action!!  It was also impressive to watch HFD working together and trying to do their best to put out the fire.  Fire Marshal Lt. Sherriff was not only compassionate but extremely helpful and excellent in his public capacity.  He explained very technical fire terminology and his role in the process in plain English that all present could understand.  He conducted an exterior tour and methodically explained step-by-step what he thought had happened to cause the fire and how it traveled.  David Viens, Building Inspector from Licenses & Inspections, was very professional and kind and stayed around to the very end, trying to explain what happens in a fire-damaged building and when and what he and his department do.  With fire personnel, he went in and salvaged important business and insurance records.  Mario too, went back into the building and saved a laptop and storage drive with other business records.  There was a young police officer manning the sidewalk who was also very kind and professional.  And true kudos to the young woman who was driving by and saw the fire -- she stopped and called it in.  Mario Oquendo will try to obtain her name from fire dispatch.  This AM after getting a few hours sleep, I was so gratified to see such a prompt response to my request for help from both Julio Mendoza of SAMA and Fernando Rosa of HEDCO.  Both knew Fran Reale for years and helped Philly and Teresa obtain the loan to purchase the building after her death.

In short, it DOES matter "who" you know in our wonderful Hartford community and regardless of our bad politics and countless media stories, Hartford does have some fine staff and related resources who support our City, our businesses, our residents.

I hope those who know Philly, Teresa, Gary and Ricky will reach out to them via email, text, phone . . . whatever.  Angel Arce is already inquiring with SAMA and Trinity College to determine the availability of commercial kitchens in the area.  I was thinking the new Swift Factory kitchens??  Anyone else have an idea or can post on their FaceBook page to learn of one available??  The holidays are City Fare's busiest and most profitable times of the year.

Thanks all for reading,
Alyssa

Most of you that have been reading the blog for a while know the story of my nephew Andrew. Andrew lives with Cerebral Palsy and doesn't let it hold him back. Several years ago he took up adaptive skiing. You can check out his website here andrewraces.com  Over the years he has progressed very well and is attempting to ski in the Paralympics in Alpine skiing.

Competing is not inexpensive. Andrew needs to travel throughout the US and Canada to competing ski events and for training. My sister Sheryl, Andrews mother ,is a tireless fundraiser to help accomplish his goal. She has organized everything from Spaghetti suppers to Motorcycle runs to keep the money coming in for airline tickets, ski equipment and everything else needed to get Andrew to the Paralympics.

People have been very generous as well as helpful with Andrew's quest.

Last weekend that changed a little bit. My sister paints pumpkins at a local farm during Halloween season. As a fundraiser she has put out a jar and people can leave donations for Andrew. Customers also leave donations for special requests and additional decorations on their painted pumpkins. 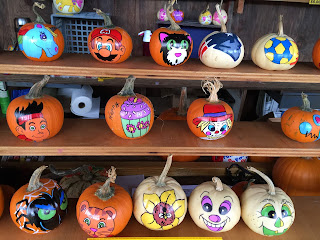 Last weekend someone stole the money from the jar. It was probably only about a $100.00 or so, but the jug is clearly marked as donations for a young man with Cerebral Palsy. How low can someone go to have to steal from an effort like that? 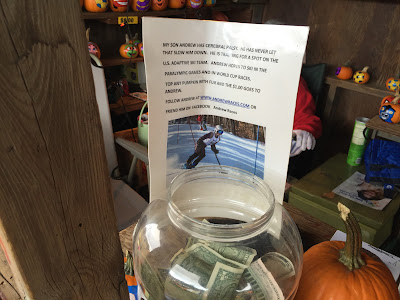 Andrew currently attends college in Utah, which puts him at some great mountains for training
You can also find out more about Andrew and his quest here
Posted by KEVIN BROOKMAN at 5:18 PM 2 comments:

I REALLY WANT TO BELIEVE 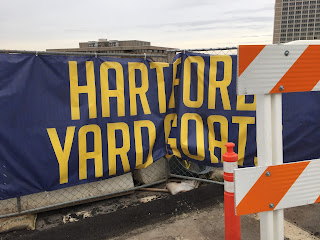 It is kind of difficult to have a lot of confidence in anything Pedro Segarra says or does. Anything that involves his administration seems to result in chaos or corruption.

I have been driving by the Yard Goats Stadium hoping to see some miraculous progress that will put my mind at ease on the future of the stadium.

Unfortunately, I'm just not seeing it. My fear is that we are constructing a hole in the ground that will be a money pit ,that we the taxpayers of Hartford will be throwing bags of cash into,( at least $4.5 million dollars per year)  for the next quarter of a Century.

The project just not seem to be realistic. The grocery store promised seems to be non -existent, the affordable housing seems to be out as the developer pushes for a hotel to be constructed.  Is any of this project outlined in a contract that is solid or is it just "play as we go" planning?

A little over 45 days from now, December 15th, is the date the Stadium Authority has set in their own minutes when the finished infield will be complete. The pitchers mound, the base layout, the sod should all be set by that date.

With the current condition of the construction I just don't see it happening. And if the pictures from Saturday are any indication, sod is the last thing that will be happening to that field December 15th 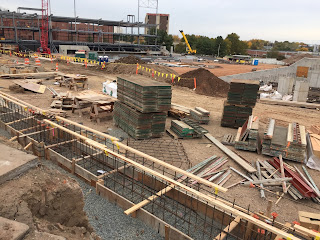 .Picture the baselines somewhere in here, among the construction materials 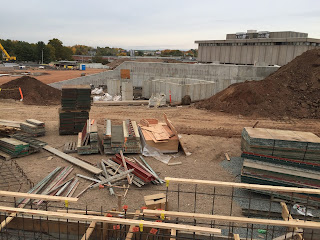