TIME TO THINK ABOUT A QUOTE FROM PRESIDENT RONALD REAGAN 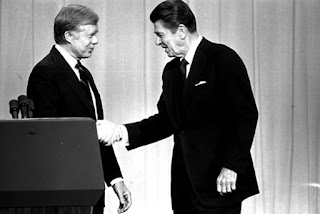 It is widely acknowledged that one question from Candidate Ronald Reagan turned the course of Jimmy Carter's re-election bid in 1980.

Reagan asked "are you better off than you were four years ago?" That was all it took.

Hopefully this Tuesday as Registered voters in Hartford prepare to vote, they can ask themselves the same question.

Are our streets any better than four years ago as Luke Bronin promised they would be? Definitely not. Hartford repair garages and body shops are still reaping the benefits of our streets every
time they re-align another front end victimized by our canyon sized potholes.

Resurfacing City streets this summer was almost nonexistent with the exceptions of a handful of streets, far short of the milling and paving we usually see every summer-

Is trash on our streets and bulky waste piled at the curbs any better, as Candidate Bronin had promised in 2015? Nope. The rats love the furniture and mattresses thrown at the curbs, they make for some great rat harborages. The overflowing dumpsters that are never inspected or cited at many apartment complexes and businesses are loved by the rats also, it grows their families big and strong.

And I think the rat inspectors and additional housing inspectors we keep hearing are coming must have gotten lost or are broken down after hitting a pothole.

Do you feel safer in your neighborhoods than you were four years ago when Pedro Segarra was leaving Office and as Candidate Bronin promised? The reality is you are not any safer.  As of today, Hartford's homicide rate is 67% ahead of 2017, and the year still has a ways to go, so we can add more.  Shootings are almost an every day occurrence. Shots fired from illegal gun activity are almost an hourly occurrence and two more people were shot on the streets of Hartford  last night.

Our schools are still a mess, even though the Mayor appoints the Majority of the Board of Education , He often ducks the issue of failing schools by saying he has no control over the BOE. Isn't that convenient.

Hartford's finances are still a mess despite the State of Connecticut bailout. Actually, Bronin tries to make it sound like he did a great job of arm twisting at the Capitol to get the bailout. What he should be calling it is the first installment on the past due bill the State owes us for underpaid P.I.L.O.T. funds.  But chances are good we will be revisiting this issue in a couple years, probably before the term of the next Mayor ends.

And that basaball stadium deal? Yes, it opened but it is still a drain of $5 to 6 Million dollars a year on the City budget for debt service payments.

Is the toxic environment of City employment gotten any better in the last four years? Definitely not. Instances of attempted suicides, actual suicides , numerous CHRO complaints filed against the Police Department and other City Departments are keeping some politically connected law firms profitable at the taxpayers expense. All due to mismanagement and lack of leadership or accountability by Bronin Department heads.. So no, that is no better than it was four years ago.

Those are probably enough examples to get you to honestly answer President Reagan's question as it pertains to Hartford.

But as you prepare to fill in that little bubble on your ballot, also keep in mind the general version of "insanity". Insanity is doing the same old thing and expecting a different result. I know Tuesday I am unwilling to settle for insanity, if we are honest with ourselves and really do care about the City many of us claim to love.
Posted by KEVIN BROOKMAN at 9:30 PM 37 comments: