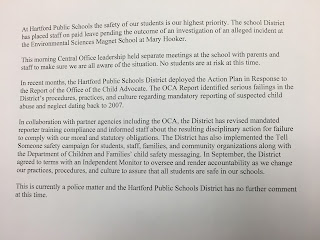 If these policies they claim were in place, why were they not followed in this case. How was the Superintendent claiming she wasn't aware of the situation until a TV reporter apparently showed up at Board Headquarters yesterday.

And if the policies were in place and they were ignored, who will be held accountable?

How can a school security guard sit in on the interrogation of a student with no parents present? And did the Security Guard ever notify his/her supervisor of the incident? If so, how did the information never make it up the chain to the Superintendent or her Chief of Staff?

WHY CAN'T THE HARTFORD BOARD OF EDUCATION LEARN?

I guess some things will never change in a system that is definitely broke.Remember back to the Eduardo Genao incident. We were told by the Superintendent of Schools that safeguards were going to be put into place to protect children from predatory behavior by adults.

After the  phone call I received yesterday, that apparently hasn't happened.

Sadly, my day started off yesterday with a very disturbing phone call from a parent of a Hartford Public Schools student.

The parent related a story that in and of itself was very disturbing, and the ensuing action by the Hartford Schools was even more disturbing.

And now keep in mind, this is information relayed from a parent, since the Hartford Schools will not comment and continue to operate in their cone of silence.

The parent stated that last week their  child, a student at the Mary Hooker School in Hartford was called into the principals Office and then interrogated by the Principal and a School Security Guard regarding any inappropriate behavior or inappropriate contact between the student and a male teacher at the school.

I apologize up front for keeping the details very generic, but I just want to lay out the scenario at this point.

One of the most troubling points is that this interrogation was conducted of a juvenile without the knowledge or consent of the child's parents. And where does the Board of Education think that it is proper for a principal, most likely more interested in her own reputation than the welfare of the child would be an unbiased objective party. And what training or expertise does the Security Guard or even the Principal have in interrogating or interviewing a potential victim of what could eventually be seen as sexual misconduct by an adult.

And it gets worse.

Only after family members observed the child acting differently, did they even become aware of what was going on.

Only after intervention by the parents, did the young child admit that she "thought she might have gotten Mr XXXXXXXX in trouble". Only after further questioning did the child relate being interrogated by the School Principal and a Security Guard.

The parent naturally made a beeline for the school and the Principal's Office and instructed the Principal in no uncertain terms that their daughter was not to be interviewed or interrogated any further without their presence.

The Principal assured the parents that the teacher in question had been removed from the classroom pending their "investigation". Apparently the Principal also did cover her bass and informed DCF as required as a mandated reporter.

According to a source familiar with the matter, DCF claims that the Principal told them she didn't feel there was any basis for a further investigation so no case was opened. Surprise, surprise. The principal was protecting her own reputation I am sure.

The father returned to the school on Tuesday and lo and behold Mr. XXXXXXXX was back in his classroom. The father immediately questioned the School administration and he claims that he was told "Mr. XXXXXXXX was spoken to, and we no longer see him as a threat so we allowed him back"  ARE YOU KIDDING ME?

I immediately contacted Chief Rovella and Deputy Chief Foley with my concerns. HPD claims they were unaware of the matter, they were never contacted by the Hartford Schools or  evn DCF after it was reported to them.

HPD has now launched a potential criminal investigation and a detective has been assigned to the matter. The Hartford Schools have also now suspended the teacher while the matter is investigated.

In the end it may show that there is nothing there or it may indicate a problem. Either way, every child that is enrolled in the Hartford School System as well as every parent that entrusts their precious children to the care and control of the Hartford Schools every day deserve nothing less. And that is for every school, whether it is a flagship school or the worst performing school in the district, the standards and accountability should be the same.

Furthermore, stringent policies need to be in place for dealing with these matters. Immediately once an allegation is made,, the Principal and other school staff should be taken out of the loop to avoid any perception of impropriety or bias. If we demand incidents such as a police shooting be investigated by an outside agency from the start, such as the State's Attorney or the Connecticut  State Police, then shouldn't we demand the same for Hartford's children when allegations are made involving a teacher.

Maybe someone could answer for me where a principal or a Security Guard received their training in investigating  a possible criminal matter of a sexual nature involving a child. And what damage is done to a child if it isn't handled properly? and why would we trust school staff to investigate their own friends?

I am relatively sure HPD has well trained detectives to handle such matters with the minimum amount of stress and embarrassment  to the child. They should be notified immediately when any whiff of impropriety arises.  This needs to be standard policy if parents are to have any trust and confidence in the Hartford Schools.

The Superintendent and the Mayor promised it after Genao, now they need to deliver if they are to be trusted.


UPDATE:  As of 5:00PM, despite a request for a comment from the Hartford Schools that I made  to spokesperson Pedro Zayas, no response has been received and sources have confirmed that a criminal investigation is proceeding and the Teacher in question has been removed from the school until a resolution of the investigation

UPDATE: 8:10PM - the Board of Education has apparently just notified parents of students at Mary Hooker School that the Principal, Ms.Thompson has now also been placed on Administrative Suspension. The Board is expected to release a statement tomorrow

SOME PERSPECTIVE ON GUN VIOLENCE IN HARTFORD 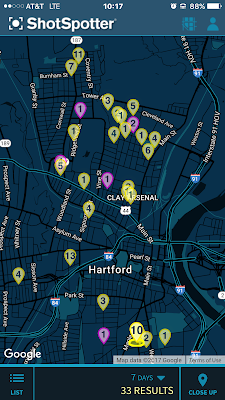 For anyone that doesn't understand that Hartford is a violent City with way too many guns on the streets, here is a pic of the shotspotter activation's for the past week. About the only area safe from gunfire in the City is on top of the old landfill off Jennings Road and the middle of the Connecticut River.

Whoever made the suggestion for "per diem cops"? Here is the reason why not.

Mayor Bronin, here is what happens when a City is short over 100 Police Officers, and this was a relatively quiet week
Posted by KEVIN BROOKMAN at 8:33 PM 34 comments: 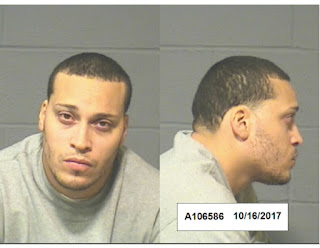 On June 23, 2017, Hartford Police Department Patrol Officers were conducting in an area likely to have shots fired, when he heard gunshots coming from the vicinity of Park Street at Hungerford Street. Additional HPD Patrol Officers and Detectives from the Focused Violence Reduction Team responded to the location. A crime scene was located and six .380 caliber shell casings were recovered. Extensive property damage was found to both the interior and exterior of The Best Barber Shop, located at 563 Park Street. It was determined that a brazen daytime gun battle had occurred involving the exchange of gunfire between two shooters. HPD FVRT Detectives Medina assumed further investigation of the incident. In the course of the investigation a suspect was developed and later positively identified as one of the involved shooters, Hector Rios-Pabon. An arrest warrant was submitted and approved charging Rios-Pabon appropriately. On August 31, 2017, Rios-Pabon was taken into custody without incident during an apprehension operation. As the investigation continued the Detectives were able to identify the second shooter from the incident, Edgardo Montanez. An arrest warrant was approved by a Superior Court Judge charging Montanez with Criminal Attempt Assault 1st Degree, Criminal Possession of a Firearm, Weapons In a Motor Vehicle, Unlawful Discharge of a Firearm, Risk of Injury to a Minor (2 counts), and Criminal Mischief 3rd Degree.
On October 16, 2017, Detectives from the Focused Violence Reduction Team and the Hartford U.S. Marshal's Violent Fugitive Task Force conducted an apprehension operation in regards to the aforementioned arrest warrant. Numerous apprehension attempts were conducted at various locations within the South End of Hartford. As a result Edgardo Montanez contacted the Detectives via phone and agreed to surrender himself. Montanez was later taken into custody without incident by the Detectives and transported to 50 Jennings Road for debrief. Montanez was then transported to the PSC for booking and processing procedures and held on a judge set bond of $450,000.

On 10/14/17, patrol units were dispatched to 35 Whitmore Street for the report of person shot. Upon
arrival, officers located an unresponsive male victim suffering from multiple gunshot wounds. Medical attention was provided by officers until the arrival of Hartford Fire and EMS. The victim was transported to Hartford  Hospital by Aetna Ambulance and listed in critical condition.

A crime scene was established and secured by patrol officers. The Major Crimes Division, Crime Scene Division and an Inspector from the Hartford State's Attorney's Office responded to the scene and assumed the investigation. Detective  K. Salkeld has been assigned as the lead investigator.

This afternoon (10/17/17) the victim was removed from life support and pronounced deceased at 2:45 pm.

Posted by KEVIN BROOKMAN at 8:14 PM No comments: