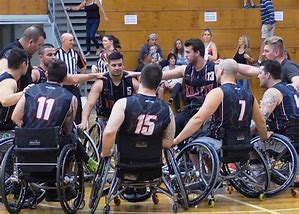 Wheelchair basketball is offered as an adaptive sport on many college campuses, but not UCONN

In the same week that UCONN Athletics announced the hiring of a new Men's Basketball coach at a salary expected to be worth over $2.75 million in the first year, Connecticut's State University also announced it was scrapping plans for a wheelchair basketball league.

Dan Hurley, the new UCONN Men's coach,  will have a base salary of $400,000 but will make at least $2.75 million in his first season, with supplemental income from media fees, speaking appearances and other perks. He could make up to $3.5 million in the contract's final year.

This decision by UCONN is wrong and also disgusting on so many levels. It sends a clear message that potential students are only wanted if they are "able bodied" and there is no place at UCONN for students with disabilities wanting adaptive spots programs.

I guess athletic departments are measured by their potential to win titles and not by the lives and character they actually build in the students and community.

As the proud Uncle of a Paralympian who is just returning from the Winter Paralympics in South Korea, I will admit, I am somewhat blinded by Andrew's success story. I have also been able to see first hand the development of a young man facing the challenge of living with Cerebral Palsy and how much it has built his character by being involved in adaptive sports and succeeding and excelling.

I have also seen the effect Andrew has had on others just through his attitude and facing his challenges head on. No one that has met Andrew and sees how he pushes himself to meet his goals can ever sit back and feel sorry for themselves when they are having a "bad" day.

And it is not just Andrew. I am sure anyone willing to play in the wheelchair basketball team would be an inspiration to the UCONN community as well as being perfect Ambassadors for the disabled community and showing that barriers can be broken down, especially when it comes to the perception of people living everyday with disabilities.

My sister, Andrew's mother, is a UCONN graduate. Her other son is also currently a Junior at UCONN. Both of them, as well as Andrew have spent countless hours working with and mentoring other adaptive athletes to encourage them and help them develop as full members of society.

UCONN should be focused on breaking down barriers for persons with disabilities, not helping to reinforce them.

This decision is wrong and needs to be reconsidered.
\
Anyone one of us could be facing a potential disability tomorrow through no fault of our own , Whether by medical  condition or through an accident or trauma, I am pretty sure we would all hope we would be treated equally and have the same opportunities if we choose to go after them, not to be shut out by a narrow minded decision such as UCONN's.

The  video below is just one more example of the wide reaching influence of my nephew Andrew Haraghey and changing the minds of people towards those with disabilities or in Andrew's case exceptional ABILITIES. You can learn more about Andrew and his adaptive sports quest at andrewraces.com