DID THE CLOCK GET PUSHED BACK TO APRIL 1ST, THIS HAS TO BE AN APRIL FOOLS JOKE

One of the main themes of Luke Bronin's campaign was accountability. He promised to bring accountability back to City government.  I think the tone of accountability needs to be set, and it could very well start with how the City's Department of Development Services does their due diligence on projects before they invest City dollars and resources into these  projects.

This is going to be a posting that will come in several parts. It is an interesting and somewhat complex issue. It will be about the people that see Hartford as the bottomless cookie jar. The developers such as the James Ducketts, the Premier Sports Group, the New York based Zacco Group and even the local poster child for the Hartford Community Loan Fund, Sohodra Dilchand.

I will say right upfront, this is not a posting where I have all of the answers. It is very complicated tracking all of the real estate twists and turns. But with that being said, there are enough red flags raised here ,  that with even a very minimum amount of research, I feel very comfortable saying something stinks.

Many of those red flags have been raised by a handful of local residents who just happen to be paying attention and are very capable at doing their due diligence to protect the interests of their City and their neighbors.

Actually , now that I think about it, those residents  are doing what we are paying some City of Hartford employees very good money to do. Shouldn't those City employees be doing the same thing residents are doing. It is called "Google", and if the residents could take the 30seconds to check some of these facts, so can those City employees ready to lead us down the path to doom on  these ill advised projects.

The Dillon Stadium mess cost taxpayers of Hartford millions of dollars and has led to a Federal Grand Jury. Many of the facts that stopped the project were dug up by residents like Anne Goshdigian who took the time to do the research. Why wouldn't Development Services staff ,who are always ready to push these projects forward take the same 30 seconds to see how many red flags they can find before wasting City time and resources on the scammers?

Dilchand was conducting business under the name SDDC , S.D. Development Company. Apparently no records can be found for an entity called S.D.Development Company being registered with the Connecticut Secretary of the State, but none the less , the City of Hartford was going to turn a property over to her for $650.00.

Not a bad risk for Dilchand, Kicking in $2000.00 of her own money and getting a property and land for $650..00. Even at the interest rate of 9% that the Hartford Community Loan Fund charges, Dilchand tried to move forward.

But apparently Geathers and Development Services failed to do their "due diligence".. Not only was Dilchand delinquent on her taxes, by City Ordinance, the City of Hartford is forbidden fro cutting deals with  developers or vendors with outstanding taxes.

In Mayor Bronin's proposed resolution to the Council, several other "success stories" of projects conducted by the SDDC Development team are listed. But try to track the ownership and principals of those projects and you will end up with a major migraine and a list of quit claim deeds and lis pendens and mortgage documents and property transfers that will make your head spin.

But apparently Dilchand knows a bargain when she sees it . From the agenda of the Hartford City Council meeting of July 20, 2015.:

The Hartford City Council will hold its regular monthly public hearing on Monday, July 20th at 7 PM  in the Council Chambers:

The items on which public comment is sought are listed below.

To this date, 97 Williams Street is still impacting the neighborhood as a blighted , burned out property. Nothing has been done on the property since Dilchand was given the home.

This is just the beginning, coming up next, the Zacco Group, their honor as a contractor on the "Suffolk County NY 'Contractors Wall of Shame" and their unfulfilled promises to Hartford after they were given properties for next to nothing, despite the red flags from the community.

And get a pad and pen ready, You will need to keep track and connect the dots of who is doing what and for who and how it all winds together into a huge web of deception perpetrated on the people of Hartford
Dilchand 97 Williams by kevinhfd

KUDOS TO CHIEF ROVELLA AND HPD 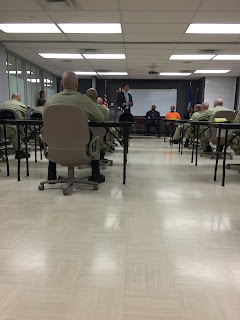 HPD Police Academy classroom yesterday
Unless you are really looking and paying attention, it might not always be easy to see the good things that are going on behind the scenes in our City. The Hartford Police Department is just one example.
I truly wish that every Hartford resident could be involved more with our Police Department and get a better feeling for what goes on and the good work Chief Rovella and his officers do  everyday to build bridges with our neighborhoods.
It is not an easy job, as many days it seems that it is "open season" on our Police.
Yesterday was another day when I was able to be a part of the creativity and the trend setting philosophies of Chief Rovella. Myself and several other community people were invited to meet with our latest recruits as at the Hartford Police Academy. It was the first time it was done , and if the results were indicative of the potential, it won't be the last. It should become required instruction for every police officer being trained , and not just in Hartford.
Most of the conversation, ( and that is what it was , a conversation not a lecture)  focused on relationships and accountability. It was interesting to interact with the future officers that will probably be making up part of our Police Department for the next twenty five years.
I saw quite a bit of potential in that room yesterday. The questions asked of us were interesting. One recruit asked what we thought as to  how the budget impacted a police officers actions. We talked about the importance of their mentorship and involvement with youth in the community, whether through the PAL program or other programs.. I spoke about the need for them to be "cheerleaders" for the City and try to change the perception that many have of Hartford.
We spoke about the need for Police Officers to not just work in our City, but also willing to make the commitment to live here and be part of what Hartford has to offer.
It was a couple hours very well spent  and I have to thank Chief Rovella for making it happen. So many of Chief Rovella's initiatives have been creative, innovative, and new. I think this is just one more of those Rovella creations that will eventually continue to build a Department that every resident can trust and relate to
Best of luck to our recruits as they continue on the path of relationships and service to the City of Hartford﻿
Posted by KEVIN BROOKMAN at 1:18 PM 8 comments:

One of the initiatives pushed this year before the Connecticut legislature is the rebranding of existing "handicap" signs to display the "new" disabled logo..  The main reason, from what I understand, is that the new logo depicts a person in a wheelchair in motion, rather than the current stick figure type character . The motion logo is supposed to be less offensive to people with disabilities.

What I consider more offensive than any logo though is the total disregard for the handicap parking spaces and the total lack of regard for their use by many.

Just pull into a Walmart or other large parking lot and look at the people that use the reserved spaces as a convenient quick stop, rather than looking  for a "regular" parking spot.

I have observed everything related to abuse of the Handicap spaces , from Police Cruisers to State Reps with their legislative plates running into Dunkin Donuts for a quick coffee to a UPS truck making deliveries, parking right in front of the obvious blue handicap sign.

This past week I was trying to park for an appointment at Mt. Sinai Rehab Hospital. I pulled into the lot , a lot which has many posted handicap spaces ( it is a rehab facility and the majority of the visitors are in need of the spaces) One of the last available places was taken  by a man that pulled into the lot and quickly parked in a clearly marked handicap space.

Now I know that disabilities come in all forms, but this man was dressed in a  uniform for the Security Company contracted for Mount Sinai/Saint Francis. I politely asked him if he forgot to hang his handicap placard before parking. He replied that he was late for work and he was only parking there for a few minutes while he went inside to punch in. His supervisor responded with the same excuse when I complained to him. 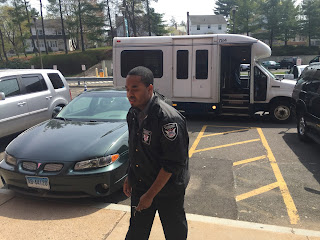 Just punching in for work at Mount Sinai, so the Handicap spot is OK
And how many of us know of someone who has kept the placard from a dead relative, just to be able to get the "good " parking spaces afforded by a handicap sign.

I think until we get serious about enforcement for handicap violations, no change in the logo is going to be effective, it is just window dressing to mask the problem.

And here is just a couple more examples. If they can't even show respect for the current signage, will a new logo make a difference? 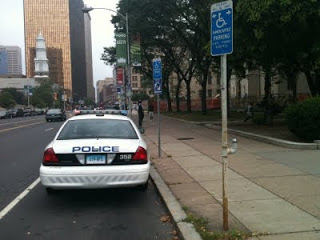 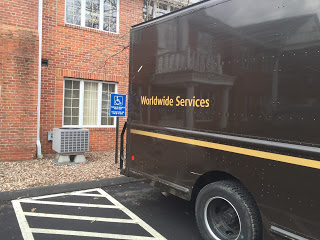 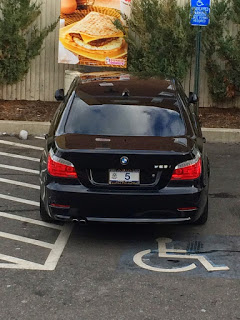