SADLY, ONLY ONE ELECTION CHALLENGE TOMORROW

Tomorrow will be election day in Hartford for only one  House district. Town Committee elections for the Fourth District, (downtown Hartford and portions of the Southend)will be the only areas where a legitimate challenge has been launched. A challenge in the Sixth District was derailed after illegal activity and forged signatures were uncovered , eventually the so called "Peterson Slate" was ruled invalid after an unsuccessful Court challenge.

The fourth district has the incumbent slate and the "challenger" slate competing for votes tomorrow. The choice is politics as usual or maybe some new blood and new ideas from the challengers.

All too often we just hear about Town Committee candidates every two years when they are campaigning for votes . One of the unique factors about at least three of the challengers is that they have made names for themselves by being out in the community regularly  and assuming a "watchdog" type role over Hartford Government.

Challenger Anne Goshdigian has shown that she is willing to put her neck on the line and stand for what she believes in. Anne initially challenged the Dillon Stadium Project and was extremely vocal against the project and uncovered much of the Fraud  that  eventually led to a Federal Grand Jury and arrests and Federal Prison time for the developer . Anne eventually also assumed the role as a vocal opponent of the Stadium Deal. trying to protect Hartford taxpayers from years  of  unnecessary bonding and debt.

Challenger Leslie Hammond has assumed a similar role to Anne, becoming a regular attendee at City Hall meetings for the Hartford City Council, the Hartford Stadium Authority as well as many other meetings and being an active  "cheerleader" for the City.

A third challenger worth a good look is a well known face to most Hartford residents. J Stan McCauley over the years has found his niche as the communicator for Hartford's political establishment, Stan can be found at many events with his video camera over his shoulder to document what is going on in Hartford to eventually be posted on his Public Access network  and other social media. Stan plays a critical role in educating people on what  is normally unseen but what goes on behind the scenes

Hartford Democratic Town Committee politics often highlight the bad and the ugly as opposed to the good. This years cycle has run true to form , especially the bad and the ugly with fraud, deception and disgusting dirty tactics. The three people I mentioned above may actually start making a difference if only given a chance tomorrow
Posted by KEVIN BROOKMAN at 6:13 PM 31 comments: 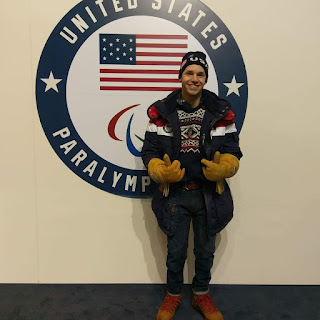 Andrew outfitted with his team uniform in the Paralympic Village

After years of hard work and training, Andrew qualified for the US Paralympic Alpine Ski Team. It is a quest that many of you who read this blog have assisted with through your support and donations over the last few years. Here is one of my past postings about Andrew,
http://wethepeoplehartford.blogspot.com/2012/09/it-is-always-adventure-with-andrew.html

I have written about him several times here, but much of the credit has to go to his immediate family, especially my sister Sheryl , Andrew's mother, for her never ending quest to encourage her son. Sheryl has over the last few years been tireless in her fundraising efforts to pay for Andrew's quest as well as writing a book and illustrating it describing Andrew's efforts, maintaining his website with information, and just basically being Andrew's "manager" , and countless trips to Vermont's Mount Snow for Andrew's training. Sheryl is also an Adaptive Ski Instructor and still volunteers many hours at Mount Snow working with skiers with disabilities

Here is an update I posted in 2014 about Andrew's efforts  http://wethepeoplehartford.blogspot.com/2014/03/an-update-on-my-nephew-andrew.html

Sheryl has dealt with airlines to get reduced airfare rates for Andrew's trips to various ski locations in Colorado and Canada and his training around the Country , worked with organizations such as the Enfield Elks to host spaghetti suppers to raise the necessary funding, and spent endless weekends at Brown's Harvest pumpkin patch in  Windsor painting pumpkins to raise funds and selling the "Andrew Rocks" painted rocks , which proved very popular. And she did all of this while still maintaining her own career and being a devoted mother  to her youngest son Ryan and wife to her husband Rich

And although this posting is about Andrew, I have to give credit to Andrew's younger brother Ryan, who has many times remained in the shadow due to his brother's "notoriety"Ryan started off skiing with Andrew and then also becoming a mentor in the adaptive skiing program at Mount Snow, skiing along side and assisting other skiers with disabilities.

Ryan is always there for his "big" brother. When they were both in High School, Andrew was in the marching band for Fermi High. Due to his Cerebral Palsy, I think Andrew knew he was going to have problems marching the whole Memorial Day Parade in Enfield route a few years ago, his "little" brother Ryan stepped up and pushed Andrew in  his wheelchair the entire parade route so that he could be part of the band's celebration

I don't think Andrew has ever seen himself as disabled and I think that spirit shines through today in accomplishing the first step in his goal to make the Paralympic Ski Team. There were challenges as well as injuries along the way, but Andrew has always bounced back. Andrew lives with Cerebral Palsy, but it doesn't rule his life and I wish every child born with a disability had the same strong family , parents and community around to support them as Andrew has.

It quite frankly scares the hell out of me when I was watching the recent Olympics and came to the realization that my nephew, Andrew Haraghey, the kid that we were never sure if he would ever walk, would be coming down those same slopes at 65 or 70 miles an hour as a member of the US Paralympic Ski Team

Best of luck Andrew. Stay safe and stay healthy. Continue to be the inspiration that you are to everyone. Beijing 2022

You can read more about Andrew at his website Andrew Races http://andrewraces.com/ 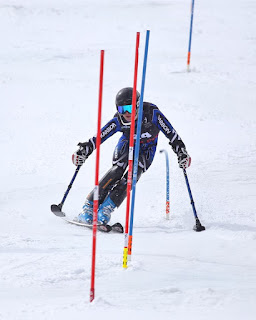 And its not cheap getting to South Korea and all the competition to qualify for the Paralympics. It will probably be over $10,000.00 in the end, and the competitors fund that themselves. Thank you to everyone that has helped on the fundraising efforts over the years, and Andrew's "Go Fund Me" is still open and accepting contributions http://www.gofundme.com/andrewraces
Posted by KEVIN BROOKMAN at 4:07 PM 2 comments: